Thousands of people have gathered across London to be part of this year’s Pride celebrations – which marks 50 years since the first march for LGBTQ+ rights in the capital.

People wearing the traditional rainbow patterns, as well as face paint and glitter, are taking part in the event this year – the first since 2019 due to the COVID pandemic.

Floats queued up along Park Lane ahead of the main parade and march through London, with more than a million people expected to line the streets in celebration of the movement.

Dubbed “the biggest and most inclusive event in history”, several artists will perform on four stages across London, including Emeli Sande, who publicly came out earlier this year.

Closing the show in Trafalgar Square will be performer Ava Max, with other artists on the line-up including Israel’s Eurovision winner Netta, noughties popstar Samantha Mumba and American actress Kat Graham.

The parade route this year will pay tribute to the original march in 1972.

Some of the organisers of that important event 50 years ago are joining this year’s proceedings that will see participants pass important landmarks along the way.

Speaking to Sky News, Martin, who was at the original march in the 70s, said: “We’ve still got a fight to do and certainly a big fight internationally.

“What happened in Oslo last weekend has made this even more relevant – in my own choir, the guy who is organising our Pride march was attacked by homophobes last night and ended up in hospital.

“If anything, it shows that what we’re doing today is absolutely relevant… and you see the flags, you see the rainbow as you see this joyous expression of being gay.

“But actually at the heart of this, the political activism is everything, that’s what it was all about.”

All the money raised from the commercial partnerships will go to straight back into the LGBTQ+ community, organisers say, with the Unity Fund, which provides grassroots funding for community projects, being one major beneficiary. 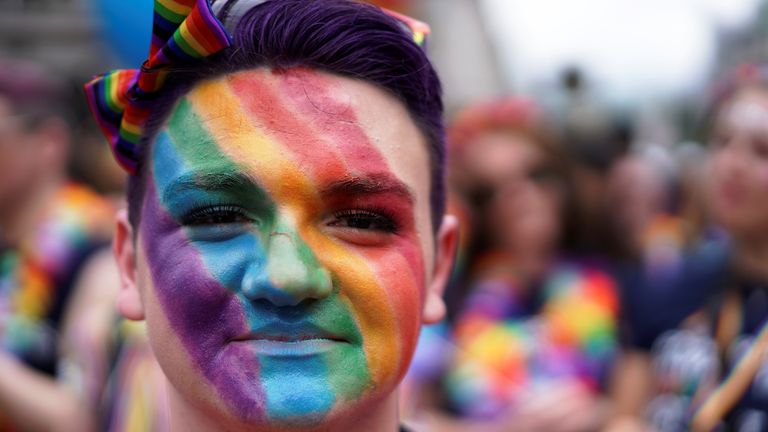 ‘The party has started’ at London Pride

‘There’s still a danger to this community’

Earlier, Mayor of London Sadiq Khan warned there was still a “danger” to the LGBTQ+ community in London, telling people not to be “complacent” at the event.

He said: “We’re back after the last two-and-a-half years or so. This year is the 50th anniversary of Pride, celebrating this community, celebrating the progress made, but also continuing to campaign and never be complacent.

“We saw this time last week an attack in Oslo just hours before that parade, where two people lost their lives and more than 20 were injured.

“So, we’ve got to be conscious of the fact that there’s still a danger to this community of discrimination, bias and violence. But allies like me are really important to support this community.”

Prime Minister Boris Johnson also hailed this year’s events, saying in a statement: “It gives me the greatest pride to lead a country where you can love whomever you choose to love. And where you can be free to be whoever you want to be.

“This hasn’t always been a given, and certainly wasn’t the case 50 years ago.

“Marching the streets in 1972 was an incredibly brave thing to do, and today will see thousands of people, friends and families once more coming together to mark the tremendous milestone of 50 years of our capital’s Pride.”

Pride in London: Thousands turn out in force as the capital celebrates 50 years since the first march for LGBTQ+ rights have 975 words, post on news.sky.com at July 2, 2022. This is cached page on Europe Breaking News. If you want remove this page, please contact us.