The 36-year-old Putney Juggernaut sparked a war of words with his former Team GB training buddy in the build-up to the fourth-round KO of the tough German.

A few days before Joyce went to Wembley arena to collapse the Hamburg 34-year-old, after a couple of early scares, AJ mocked him for advertising an electric shaver especially designed for male privates.

And the fine art graduate – who expects Oleksandr Usyk to win the August 20 rematch with AJ, leaving the London 2012 Olympic icon looking for a comeback bout – now wants the scalp of his prickly dream opponent.

The 6ft 6in Brit nailed Hammer with a selection of head and body blows at the start of the opener.

But Hammer tested the Englishman's famously firm whiskers with a hat-trick of piledrivers that frightened the London crowd. 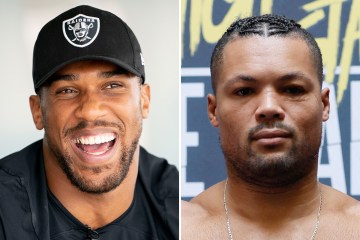 'He can focus on promoting his ball trimmers!' – AJ tells Joyce to forget fight

Three looping flush right hands knocked all the spit and snot out of Joyce's nose and mouth but the granite-chinned hulk walked through the assault.

Hammer kept swinging again in the second and landed a worrying amount of clean digs again but Joyce's iron jaw refused to betray him.

Joyce got his fans on their feet in the third when the chunky German looked bratwurst for wear and he was bludgeoned to his knees right on the bell for an eight count.

Hammer was folded early in the fourth when his meaty ribs were whacked and again, with two long minutes of the stanza remaining and it was waved off when a third decking came from another torso trembler.

Most read in Boxing

Joyce, who will box again in September, roared: "He was tough and game and hit me with some big shots early on.

"I enjoyed it so much because it has been a whole year since I was last out.

"I tend to take a few early shots until I warm into the fight and get my footwork and head movement going.

"I have a big heart and engine and a good chin and I am ready for all comers.

"I want the winner of AJ vs Usyk."

Joshua, 32, might have fired Joyce up when he replied to the jibe he is a chinny businessman as the war of words with his friend-turned-foe ramped up.

The former two-time world heavyweight king quipped: "We're all trying to promote something and be businessmen — he's promoting balls trimmers, I don't.

“What's good for him is not for me. I don't cuss him for it so he needs to just focus on himself."

"I definitely don't have a chin like Joe Joyce and I definitely wouldn't want to take the punches he takes either.

"But good luck to him. He's on my hit list but all in good time, he'll get what's coming to him.

If Joyce does get a shot at AJ , he will have the Baddest Man on the Planet to thank.

Joshua said: "Prize-fighting is about honouring your brothers in the sport, giving them an opportunity to make a living — that's what the great Mike Tyson said.

"It's what prize-fighting is about and, if I live by what my icons told me, 100 per cent I'll give Joe a chance."

Joe Joyce calls out winner of Joshua vs Usyk as Brit juggernaut batters Christian Hammer to close on world title shot have 841 words, post on www.thesun.co.uk at July 3, 2022. This is cached page on Europe Breaking News. If you want remove this page, please contact us.