ISRAEL ADESANYA “doesn’t think” former foe Alex Pereira will be deserving of a title shot if he gets past Sean Strickland this weekend.

Former Glory double champ Pereira can catapult himself into title contention early on Sunday morning with a win over the in-form American at UFC 276 in Las Vegas .

UFC president Dana White has all but confirmed the winner of the main card bout will bag the next crack at the middleweight strap, which Adesanya will defend in the card’s showpiece bout.

But The Last Stylebender, who fights Jared Cannonier for the title, believes it would be somewhat unfair to hand the Brazilian – who knocked him out in his final kickboxing bout in 2017 – a title fight after only three appearances in the promotion.

When asked if Pereira would be deserving of a title shot so early into his UFC career, Adesanya, speaking in his role as a global brand ambassador for crypto casino and sports betting platform Stake.com , told SunSport: “I don’t think so.”

Newly-crowned light-heavyweight champion Jiri Prochazka fought for the 205lb title three fights into his stint in the UFC, although the Czech clubber had more than paid his dues outside mixed martial arts’ premier promotion. 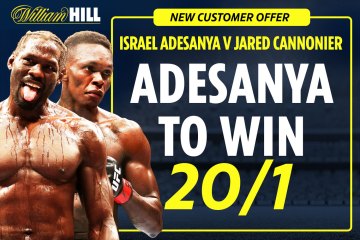 KO OFFER UFC 276 – Adesanya vs Cannonier: Get Adesanya at 20/1 to win with William Hill

Adesanya said: “Someone like Jiri, Jiri has fought MMA all over the world and fought extensively before jumping into the UFC.

“So he has an extensive background in MMA. Alex has it in kickboxing, so it’s a different game entirely.

“We’ll see how he wins, first. Let’s not get ahead of ourselves.”

Most read in MMA

The prospect of a winter title defence against the winner of Pereira vs Strickland excites Adesanya, who is coming off back-to-back rematches with Marvin Vettori and Robert Whittaker .

He said: “It definitely gets me up. I like new blood, fresh blood.

“Even Pereira, fighting him is still new blood because he hasn’t seen me in my element which is real, unhinged striking in MMA.

“No pillows for hands, straight, straight striking. Also, we have the element of grappling as well, which he’ll be surprised about.

“Also, Sean Strickland is a guy I feel would play the game very well. He’d be a good dance partner to fight against.

Before Adesanya can think about facing Pereira or Strickland, he must first get through the in-form Cannonier – who has won four of his last six by way of TKO.

But he’s anticipating a short and sweet night at the office, saying of the fight: “It turns out beautiful like a masterpiece.

Passengers offered £8,200 to fly the next day – here’s how you could get it

Israel Adesanya is an ambassador for Stake.com , one of the leading and fastest-growing cryptocurrency betting and gaming operators worldwide.

Israel Adesanya ‘doesn’t think’ Pereira will deserve title shot with UFC 276 win over Strickland but is eyeing trilogy have 690 words, post on www.thesun.co.uk at July 1, 2022. This is cached page on Europe Breaking News. If you want remove this page, please contact us.