BRITNEY Spears celebrated marrying for the third time — by recreating her showstopper kiss with Madonna.

The US pop star wed her boyfriend of five years Sam Asghari at her LA estate watched by other A-listers including Paris Hilton , Selena Gomez and Drew Barrymore .

Britney, 40, wore four different outfits and danced to her own songs at the raucous reception, which went on into the early hours of yesterday morning.

She and Madonna , 63, locked lips again — just as they famously did at the MTV Video Music Awards in 2003.

Hours before the wedding, her first husband Jason Alexander was arrested after he broke into her £7.4million estate to gatecrash the nuptials.

Jason, wed to Britney for 55 hours in 2004, climbed into the grounds and was later tackled to the floor by security.

Britney's bridal gown was made by designer Donatella Versace, 67.

She also wore a black Versace mini dress, a two-tone outfit and a red mini dress. 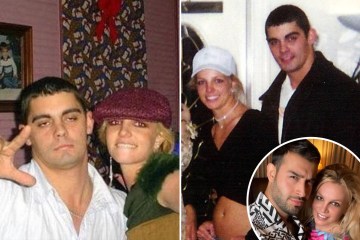 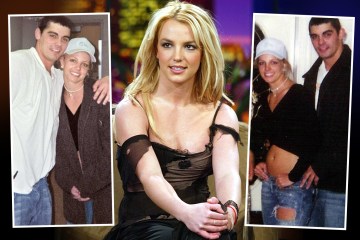 Inside Britney's troubled past with 'stalker' ex-husband Jason Alexander

But Kevin, who split from Britney after three years in 2008, said they were thrilled for her.

He said: "They're happy for their mum and they are hopeful Sam and Britney are starting a great future together.

"It's their night and they didn't want to take that away from them."

The bride wore jewellery worth more than £400,000 from designer Stephanie Gottlieb, including a heart-shaped diamond necklace alone worth over £80,000.

GET YOUR OWEN MAN

Ulrika Jonsson poses braless in her bathroom for sexy selfie

She arrived at the aisle in a fairytale horse-drawn carriage and walked down to meet Sam, 28, to the tune of Elvis' 1961 classic, Can't Help Falling in Love, before a ceremony which lasted ten minutes.

Her brother Bryan, 45, was the only member of her family present.

Mum Lynne, 67, father Jamie, 69, and sister Jamie-Lynn, 31, were not invited after the very public row over Britney's conservatorship.

The star fought to be freed from the strict legal hold — set up in 2008 — which saw her father taking a majority control of her personal and business affairs. It was dissolved in November last year.

It had banned her from getting married and starting a family, along with controlling where and when she could spend her reported £40million fortune.

Her lawyer Mathew Rosengart, who helped free Britney from the legal hold, saw her marry.

Insiders told The Sun the wedding cost in excess of a seven- figure sum.

Following their vows, the couple hosted a raucous ceremony, with Britney dancing to her 2004 hit song Toxic with Madonna.

She also performed pal Paris Hilton's song Stars Are Blind with the US heiress.

Britney and Sam were later driven away from the house in a white Rolls-Royce with "Just Married" written on the back.

A source said: "Britney and Sam's wedding was everything they wanted it to be.

"The ceremony was short but sweet and the reception was filled with music and dancing."

A representative for the tight-lipped groom said Sam was over the moon.

He said: "I am ecstatic this day has come. I know he wanted this for so long. He is so caring and supportive."

Those close to the star –— who has had 23 UK Top Ten singles and has sold more than 100 million records — said her ex Jason's stunt had not sullied her big day.

Fans online watched horrified as Jason, who was found guilty of stalking an unidentified woman in the US earlier this year, broke into Britney's estate.

He moved through the property while streaming it live on social media and was heard calling the wedding "bulls***".

He appeared to be searching for Britney as he combed the house and filmed the wedding tent and floral decorations.

As he was wrestled to the ground by security at the house, Jason was heard shouting: "Don't put your hands on me."

An eyewitness told The Sun: "Jason walked up the Los Robles hiking trail next to Britney's property.

“He said he has been coming here for three weeks and he was live on Instagram.

"Jason had a deranged look in his eye — like he hadn't slept.

"He wasn't carrying anything except his phone."

I'm a curvy girl, people say I'm too big to wear a bikini but it won't stop me

Britney and actor Sam met on the set of the music video to her song Slumber Party in 2016. He proposed last year.

The couple lost their first child earlier this year after Britney miscarried.

Mayhem and mischief at Britney Spears’ third wedding – where Madonna kissed the bride have 1020 words, post on www.thesun.co.uk at June 10, 2022. This is cached page on Europe Breaking News. If you want remove this page, please contact us.