Rangers have been denied a historic victory after suffering penalty shoot-out heartbreak in the Europa League final.

The Scottish club lost the spot-kicks 5-4 against Eintracht Frankfurt in Seville following 120 minutes of a closely-fought game.

Rangers went ahead courtesy of a Joe Aribo goal with a crisp low finish on 57 minutes.

The German side levelled matters 12 minutes later when Rafael Santos Borre prodded the ball in past keeper Allan McGregor.

The match finished 1-1 after 90 minutes and went to extra-time.

Despite chances for both sides, the deadlock could not be broken and the final was decided by penalties into the end filled with Rangers fans.

It was 3-3 before Aaron Ramsey’s spot-kick was saved by Kevin Trapp, handing the advantage to the opposition. Ramsey had been brought on as a substitute for the Glasgow team after 117 minutes of the game.

Filip Kostic scored Eintracht’s fourth penalty despite McGregor getting a hand to it.

The Gers’ Kemar Roofe made it 4-4 but then a stunning penalty into the top corner by Santos Borre sealed the victory for the German side.

About 100,000 Rangers supporters had travelled to the Spanish city, most without tickets.

But in the event they ended up with about two thirds of the 42,000-capacity Ramon Sanchez-Pizjuan stadium.

It was Rangers’ 19th game in Europe this season and Giovanni Van Bronckhorst’s side now have to get themselves ready for the Scottish Cup final against Hearts at Hampden Park on Saturday.

The last time the Ibrox club won a European final was 50 years ago when they beat Dynamo Moscow 3-2 to claim the Cup Winners’ Cup in 1972.

Rangers were most recently in a final on the continent in 2008 when they lost 2-0 to Zenit St Petersburg in the UEFA Cup.

Wednesday night’s final came just over a decade after Rangers entered administration, resulting in the club dropping down to the third division in Scottish football.

For Eintracht, it was their first title in Europe since triumphing in the 1980 UEFA Cup.

The victory also saw them qualify for the Champions League next season despite finishing in 11th place in the Bundesliga. 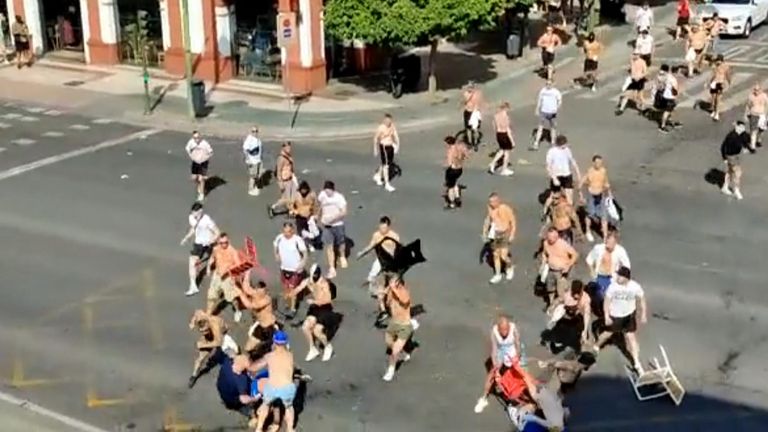 “We played 13 matches in Europe and we did not lose a single one,” said Eintracht coach Oliver Glasner.

“We took it step-by-step and at the end we were rewarded. I have no words to express what I feel for the players.”

Before kick-off, there were some violent clashes between Rangers and Eintracht fans in the city.

Europa League final: Rangers suffer penalty shoot-out heartbreak as they lose to Eintracht Frankfurt have 692 words, post on news.sky.com at May 19, 2022. This is cached page on Europe Breaking News. If you want remove this page, please contact us.