This article was last updated at 12:49 UTC/GMT

After his convoy was hit, Shishimarin and four other fleeing soldiers are alleged to have stole a car from outside the village of Chupakhivka in the early days of the invasion.

He is accused of attacking the 62-year-old, who was riding past them on a bicycle, to prevent him from reporting their presence.

“One of the military servicemen ordered the accused to kill a civilian so that he would not report them. The man died on the spot just a few dozen meters from his home,” Ukrainian prosecutors said.

Shishimarin is charged with war crimes and premeditated murder and could face a life sentence.

The Kremlin said on Wednesday that it had not been informed about the case.

“We still have no information. And the ability to provide assistance due to the lack of our diplomatic mission there is also very limited,” Kremlin spokesman Dmitry Peskov said.

The Russian Foreign Ministry says it is expelling scores of diplomats from several European countries in a retaliatory move to their expulsions of Russian diplomatic personnel.

Moscow said it was expelling 34 “employees of French diplomatic missions” in a tit-for-tat move.

In a statement, the Russian Foreign Ministry said 27 employees of the Spanish embassy in Moscow and the Spanish Consulate General in Saint Petersburg “have been declared personae non-gratae.” Meanwhile, ministry spokeswoman Maria Zakharova told Russian news agencies that 24 Italian diplomats had also been expelled, also in an apparent retaliatory move.

A diplomatic source told the AFP news agency the French diplomats had been given two weeks to leave the country. The announcement comes in response to France kicking out 35 Russians with diplomatic status in April.

The French Foreign Office said the step had “no legitimate basis.” In a statement, it said that “the work of the diplomats and staff at [France’s] embassy in Russia… takes place fully within the framework of the Vienna Convention on diplomatic and consular relations.” Paris expelled the Russian staff in April on suspicion of being spies.

Italian Prime Minister Mario Draghi on Wednesday condemned Russia’s expulsions of the various nations’ diplomats. “This is clearly a hostile act,” he said.

EU proposes up to €9 billion in more aid to Ukraine

Speaking in a broadcast statement, von der Leyen said the fund would help the country cope with the ravages of war.

The Commission president said it was time to think about rebuilding Ukraine whenever the war ends . She added that the EU had “a strategic interest in leading this reconstruction effort”.

Speaking in a broadcast statement, von der Leyen said the EU also intends to mobilize up to €300 billion of investment by 2030 to end the bloc’s reliance on Russian oil and gas.

The investments will include €10 billion for gas infrastructure, €2 billion for oil, and the rest for clean energy, von der Leyen told reporters.

Ukraine calls for Azovstal fighters to be exchanged

Ukrainian military officials say they still hope fighters extracted from the Azovstal steel plant in Mariupol could be exchanged for Russian prisoners of war.

However, Russian lawmakers plan to take up a resolution that would prevent the exchange of Azov Regiment fighters on Wednesday.

The soldiers held out for months inside the Azovstal steelworks plant while Mariupol was under siege.

According to the Russian Defense Ministry, nearly 1,000 Ukrainian holed up at the works have surrendered this week — many of whom are wounded.

They are reported to have been taken to a reopened former penal colony in Russian-controlled territory.

It’s unclear how many fighters still remain at the sprawling site which became the last bastion of Ukrainian resistance within Mariupol.

Ukraine’s Deputy Defense Minister Hanna Maliar has said negotiations for the troops’ release are ongoing with some fighters still believed to be inside the mill.

Donetsk separatist leader Denis Pushilin has said a court will decide the fate of the Ukrainian fighters, a local media outlet reported.

The finance ministers of the Group of Seven leading economies are meeting in Germany to discuss short-term aid to stabilize the Ukrainian national budget.

It’s believed that the country needs some €5 billion of assistance for an initial period of three months.

US Treasury Secretary Janet Yellen on Tuesday said the European Union was likely to make significant financial contributions to keep Ukraine going. Yellen added that she hoped other G7 members like Britain, Canada and Japan would also step up.

Yellen, who was in Brussels on Tuesday, said the US has made a strong commitment to funding Ukraine and that it was clear that the EU was “very serious about wanting to provide the necessary aid as well.”

US Treasury officials have also said they plan to propose the idea of European countries imposing tariffs on Russian oil — as a faster alternative to an outright ban on it — at the meeting.

EU officials are now considering a phased embargo on Russian oil, but there are concerns from eastern European countries about supply. A tariff mechanism would be designed to keep Russian oil on the market but limit the amount of revenue that can flow to Moscow from exports, the Treasury officials said.

Finland and Sweden have formally submitted their bids to join NATO , despite Turkey’s threat to block the addition of the Nordic nations.

“I warmly welcome the requests by Finland and Sweden to join NATO. You are our closest partners,” Stoltenberg told reporters.

Finland — which has a 1,300-kilometre (800-mile) border with Russia — and its neighbor Sweden have been disturbed by Moscow’s invasion of Ukraine.

The two countries’ accession would end decades of military neutrality to join the alliance as a defense against feared aggression from Russia.

Russian President Vladimir Putin on Monday warned that the expansion of NATO might trigger a response. However , the main obstacle to Finland and Sweden’s membership comes from within the alliance.

Turkey claims that both Sweden and Finland have provided a refuge for terrorist groups and Turkish President Recep Tayyip Erdogan insists Ankara will not approve the expansion.

Any bid to join NATO must be approved unanimously by all 30 members of the alliance.

US sets up conflict monitor on Ukraine

The United States has set up a new monitoring body to build legal cases against Russia for crimes committed during its war against Ukraine.

The State Department says it aims to contribute to eventual prosecutions in the domestic courts of Ukraine and those of third-party countries, plus US courts and other tribunals. The monitor would also provide information refuting Russian disinformation campaigns.

Annoucing the creation of the Conflict Observatory, State Department spokesman Ned Price said it would “ensure that crimes committed by Russia’s forces are documented and perpetrators are held accountable.”

“The program will capture, analyze, and make publicly available open-source information and evidence of atrocities, human rights abuses, and harm to civilian infrastructure, including Ukraine’s cultural heritage,” he said.

Reports will be posted on ConflictObservatory.org . Price said the observatory was a collaboration that would involve scientists and the private sector.

The first war crimes trial against a Russian soldier since the start of the invasion is set to start on Wednesday.

A Russian soldier will appear at Kyiv’s Solomyansky district court from 2 p.m. local time (1100 GMT) accused of killing a 62-year-old civilian in northeastern Ukraine on February 28. He faces a possible life sentence.

“He understands what he is being accused of,” his lawyer Viktor Ovsiannikov told the AFP news agency. “This is the first such case in Ukraine with such an indictment. There is no relevant legal practice or verdicts on such cases. We will sort it out.”

Ukrainian authorities said the suspect is cooperating with investigators.

Russian soldier to be tried for war crimes in Ukraine

Prosecutors say the suspect was commanding a unit in a tank division when his convoy came under attack. According to prosecutors, he and four other soldiers stole a car and as they were traveling near the northeastern village of Shupakhivka, they encountered a 62-year-old man on a bicycle.

“One of the soldiers ordered the accused to kill the civilian so that he would not denounce them,” the prosecutor’s office said. The suspect then shot the man from the window of the vehicle, prosecutors say.

The trial is likely to be followed by other cases. Two Russian soldiers are due to go on trial on Thursday for allegedly firing rockets at civilian infrastructure in the Kharkiv region.

On Tuesday, the office of the Ukrainian chief prosecutor tweeted that it had registered 11,846 cases of “crimes of aggression and war crimes” and 5,644 “crimes against national security” involving 623 suspects.

Ukrainian and Russian officials have said that negotiations between the two countries have stagnated.

Moscow has accused Ukraine of hardening its stance. Russian Deputy Foreign Minister Andrei Rudenko that Kyiv has “practically withdrawn from the negotiation process.”

Russian Foreign Minister Sergei Lavrov said that Western countries want to use Ukraine to their strategic advantage. He argued that no peace deal can be made if negotiators focus on the West’s concerns rather than the immediate situation in Ukraine.

“We always say that we are ready for negotiations … but we were given no other choice,” Lavrov said.

Ukrainian presidential adviser Mykhailo Podolyak said that talks are “on hold” as Russia is not willing to accept it “will not achieve any goals.”

“Russia does not demonstrate a key understanding of today’s processes in the world,” Podolyak said, according to Ukrainian media. “And its extremely negative role.”

Russian Foreign Minister Sergei Lavrov has said that Finland and Sweden joining NATO would not make “much difference.”

“Finland and Sweden, as well as other neutral countries, have been participating in NATO military exercises for many years,” Lavrov said.

“NATO takes their territory into account when planning military advances to the East. So in this sense there is probably not much difference. Let’s see how their territory is used in practice in the North Atlantic alliance.” 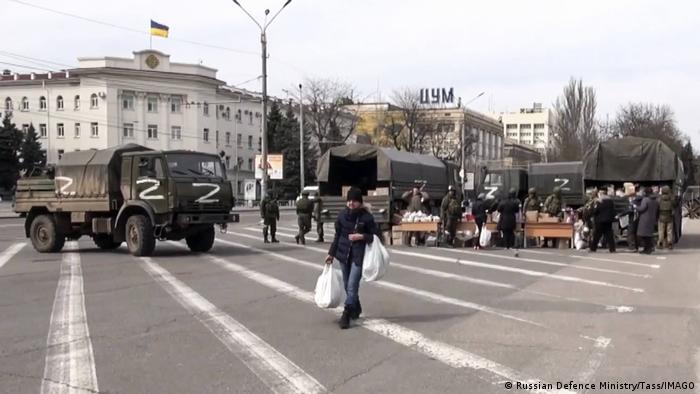 Most of the Kherson region, including the regional capital, is under Russian control

RIA Novosti reported that Khusnullin said that the region would take a “worthy place in our Russian family.” Kherson is under Russian occupation.

On May 1, Moscow introduced the Russian ruble as official currency in the region.

A few days ago, the Russian-installed local government in Kherson said it plans to appeal to Moscow for the right to become part of the Russian Federation.

Independence from Russian gas: Is it possible?

The European Commission will unveil a €210 billion plan ($222 billion) to end Europe’s reliance on Russian fossil fuels by 2027 and accelerate the shift to green energy.

According to draft documents cited by Reuters, Brussels plans to import more non-Russian gas, implement a faster rollout of renewable energy and make efforts to save energy.

The Day with Phil Gayle: Surrender in Mariupol

Summary of events in Ukraine-Russia crisis on Tuesday

Ukrainian President Volodymyr Zelenskyy made a surprise video address at the opening ceremony of the Cannes Film Festival. The former actor turned statesman asked for the cinema world’s solidarity with his people in the face of the Russian invasion. The International Criminal Court sent war crimes investigators to Ukraine in what it called the largest deployment of its kind in the ICC’s history.

Eight people were killed and 12 wounded in a Russian airstrike on the village of Desna in the northern Ukrainian region of Chernihiv, the regional emergency service said.

Ukraine’s military said it was working to evacuate all remaining troops from the Azovstal steelworks in Mariupol .

The western Ukrainian city of Lviv was reportedly hit by at least eight explosions.

Catch up on yesterday’s events by clicking here

Ukraine: Russian soldier pleads guilty of murder at Kyiv trial — live updates have 2434 words, post on www.dw.com at January 18, 2022. This is cached page on Europe Breaking News. If you want remove this page, please contact us.