When German electronic band Kraftwerk released the iconic song “Autobahn” in 1975, they were celebrating freedom of movement on freeways where drivers could speed without limit.

But these mythical superhighways are today a source of increasing division as the climate crisis demands countries curb road transport emissions.

Though the autobahn’s origins are wrongly ascribed to Hitler — he completed the first highways with forced labor, but they were a Weimar-period invention — today their legend is associated with Germany’s failure to meet its climate obligations.

Transport generates over 20% of German greenhouse gases. It was also one of only two sectors to fail its annual emission reduction targets in 2021.  Yet new road construction projects — as opposed to low-emission electric railways or bicycle highways — dominate the 2030 federal transport plan. Some 850 kilometers (528 miles) of autobahns are on the drawing board.

Opposition to such expansion is growing as activists say the roads are too expensive and limit Germany’s ability to meet legislated climate goals.

Disaster by the dozen: Twelve autobahns no one needs, a 2021 report by the German Federation for the Environment and Nature Conservation (BUND), has called out Germany’s mania for boundless highway construction.

Around 80% of a planned autobahn, the A20, along the northwest coast of Germany will cut through moors and marshlands that sequester 450 million tons of CO2, the report notes. Rare animal species and local flora will also be destroyed, according to BUND. And it will cost at least €6 billion ($6.3 billion) — three times the estimate in 2016.

Meanwhile, Germany’s scarce remnants of ancient forest are also being cleared to add more highway to what is already the densest road network in Europe.

In Berlin, the March announcement of a further expansion of the A100 running through the capital caused hundreds to protest, saying the road would ramp up climate pollution and destroy an essential part of the capital’s built environment and cultural life. 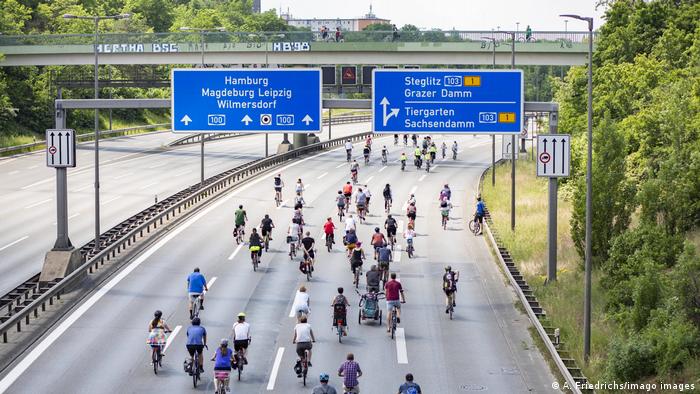 The Berlin state opposes the extension. But Germany’s federal government, which has jurisdiction over national autobahns and highways, plans to push ahead.

“The rest of Europe is getting cars out of cities because it’s better for the climate, for public health, for quality of life,” said Benjamin Stephan, transport and climate change campaigner at Greenpeace Germany.

Yet the federal government continues to push autobahn expansion, whatever the cost. Not even emissions-reducing speed limits can count on enough support at federal level, meaning 70% of the country’s autobahns still allow drivers to put their foot down without restriction. Greenpeace analysis showed that a 100 kmph autobahn speed limit would also be the quickest way to reduce oil use during the Ukraine war. 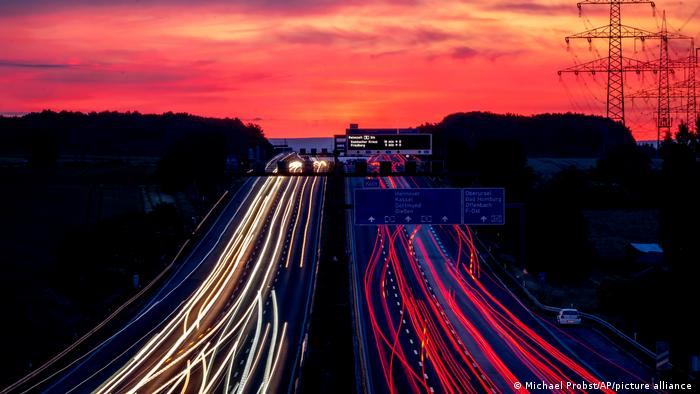 Campaigners hope the sun might soon be setting on Autobahn construction

Freeway extensions and the building of extra lanes are often aimed at solving bottlenecks on autobahns that have notorious congestion problems.

However, the long-term effect of these expansions is to create more traffic, says Udo Becker, a transport ecologist at the Technical University of Dresden.

The problem is partly cultural and historical, Becker argues, relating to a “traditional paradigm” of endless growth that emerged out of a destroyed post-war Germany.

“More is better is entrenched in our perspective,” he said. “More roads and more traffic is better.”

This paradigm has also benefited the German automobile industry, which accounted for almost 10% of national GDP in 2020 and is known for its close ties to past German chancellors including Angela Merkel — once dubbed the “Autokanzlerin,” or “car chancellor.”

“What you will get out of this A100 extension are of course climate gas emissions, more costs, more noise and more pollution,” he said of Berlin’s expanding autobahn.

Yet these factors are rarely factored into highway planning.

The European Commission calculated that such ‘external’ transport costs, including accidents, air pollution, climate change, noise, congestion and habitat damage, across the EU amounted to near €1 trillion ($1.08 trillion) in 2019. Road transport alone generated 83% of these costs (€820 billion).

If these hidden costs were factored into the budgets for autobahn construction, “they would never be built,” says Greenpeace’s Benjamin Stephan. 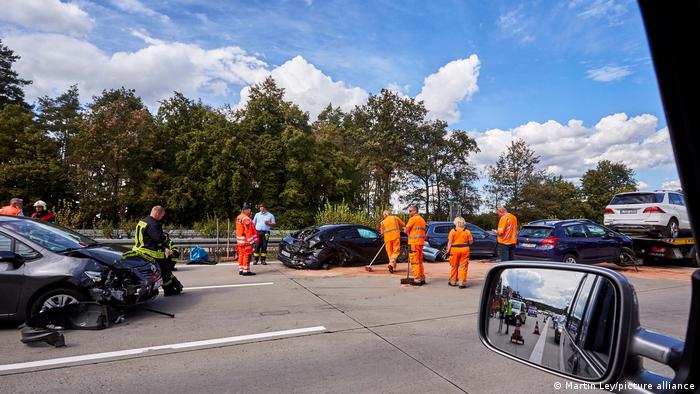 Transition coming, but reform will be slow

In 2020, in her role as leader of the Greens, Annalena Baerbock called for a moratorium on autobahn construction. At that time, her party was in the ascendancy and Baerbock herself was being touted as a potential chancellor.

But since taking power in a coalition with the Social Democrats and the Free Democratic Party (FDP) in December, the Greens have committed neither to a moratorium, nor to a speed limit to save fuel and cut emissions .

Efforts to present a united front within the new “traffic light” coalition have given transport minister Volker Wissing of the pro-business FDP party free reign to support autobahn projects such as the A1 in Berlin, according to Dorothee Saar, a transport expert at Berlin-based Environmental Action Germany.

She notes that transport is only vaguely mentioned in the new German climate law, which sets the ambitious goal of cutting emissions by nearly 50% in 2030 based on 2019 levels, yet does not give a date for phasing out the internal combustion engine — though it refers to an EU agreement to only register CO₂-neutral vehicles in Europe from 2035.

Despite the politics, Saar says the key obstacle to transport reform is the “removal of [outmoded] projects from the existing plans” that have been approved and are set in law. “We should scrap existing plans,” she said. Saar refers to one proposal by campaigners to legislate a new Federal Mobility Act that will make climate targets  integral to transport sector planning .

Last ditch effort in the courts

Meanwhile, some campaigners are banking that a federal court will rule autobahn extensions contravene Germany’s climate commitments . A precedent was set last year when a judge said the government had to update its climate law with stronger targets.

Right now, the BUND and local activists are attempting to sue the federal government over the climate impacts of building the A20 autobahn in the northwest of the country. A decision is due in early July. if the court rules in favor of the climate campaigners it could finally end Germany’s long highway addiction, says Stephan.

“That would unravel the entire 850 kilometers [of autobahn] that are in the pipeline,” he said.

Autobahn: Germany's roads to nowhere have 1126 words, post on www.dw.com at January 1, 2022. This is cached page on Europe Breaking News. If you want remove this page, please contact us.