In winning his first grand slam tennis title at this year's US Open, 25-year-old Daniil Medvedev, the world's number two ranked player from Russia, caused some heartache to the man he beat in the final match, Novak Djokovic, men's top-ranked player. Djokovic was going for the elusive Grand Slam; a rare honour of winning all the four major titles (Australian Open, French Open, Wimbledon and US Open) in the same calendar year. This was certainly not Djokovic's only loss on the tennis tour, but he is likely to remember this loss for a long time to come.

There are some tennis matches, where the loser loses a bit more than just a match. He or she loses a chance for an elusive record or a prestigious position that few before them would have achieved. Here's Moneycontrol's list of five such inexplicable tennis losses in recent memory.

In 2015, American star Serena Williams, now ranked 22 in the world, was pretty much in the same spot as Djokovic was on Sunday night at Flushing Meadows, New York. Williams had won all the three Slams heading into New York. Winning the US Open that year would have equalled two remarkable records that Steffi Graf, former number one tennis player, had held up until then. Graf was the last tennis player to have won the Calendar Slam, topped by an Olympics Gold medal she had also won, in 1988. And it would have also tied Williams' tally of singles Slams at the time, with that of Graf, at 22 Slam titles. 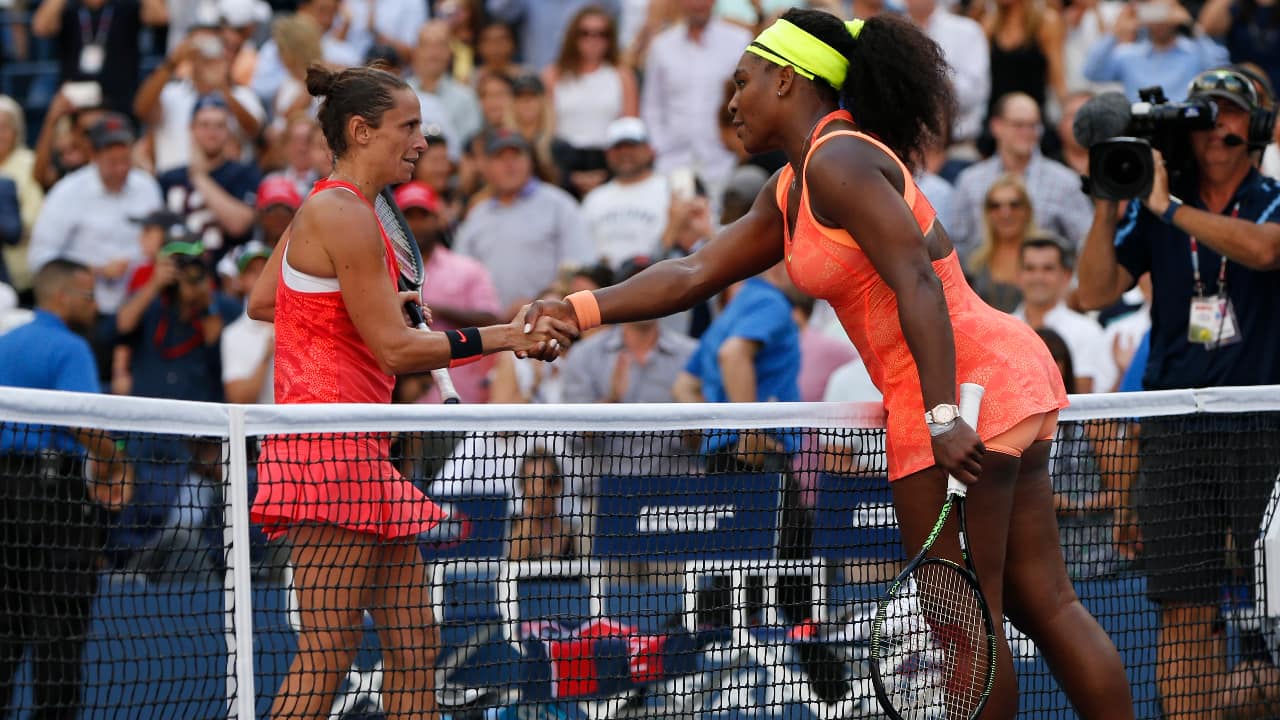 Roberta Vinci of Italy (L) shakes hands with Serena Williams of the US after she defeated Williams in their women’s singles semi-final match at the US Open Championships Tennis tournament in New York, on September 11, 2015. (PC-REUTERS/Shannon Stapleton)

Sadly, Serena ran into an inspired Italian player Roberta Vinci, unseeded, ranked number 43 at the time, and having the tournament of her life. Vinci beat Williams and denied her the Grand Slam. Williams equalled Graf's record of singles' Slam titles tally next year at Wimbledon and then marched ahead at the Australian Open 2017 where she won her 23 rd grand slam singles title, before taking her maternity break. But the calendar year Grand Slam remained elusive.

Meanwhile, Vinci lost the US Open's finals, reached the finals of just one more tournament after that (February 2016) and retired in 2018.

American tennis player Martina Navratilova had won 18 singles grand slam titles heading into 1994. But Wimbledon was special; she had won nine singles titles already; the last of which had come in 1990. In 1994, she reached the finals yet again. Already on the cusp of retirement and overtaken by much younger rivals, she had hoped to win the elusive 10 th Wimbledon singles title. 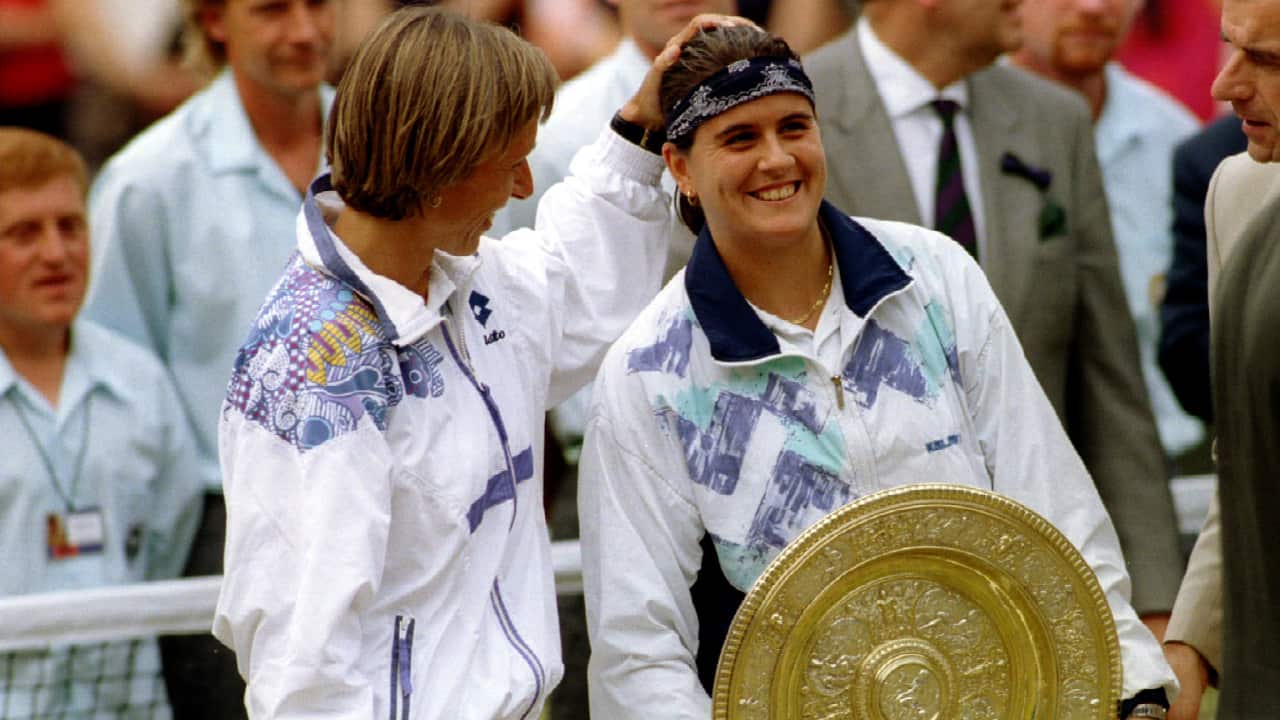 Spain’s Conchita Martinez is patted on the head by Martina Navratilova of the US after her victory in the Ladies Singles final at the Wimbledon tennis championships in England on July 2, 1994. Martinez won the final 6-4 3-6 6-3. (SCANNED FROM NEGATIVE REUTERS/Andrew Wong)

The coast was clear. At Wimbledon 1994, Navratilova's closest nemesis, Steffi Graf had lost in the first round. Monica Seles, former world's number one player, was sidelined nursing her horrific injury after she was stabbed on court a year ago. Navratilova reached the finals. Her opponent: Spain's Conchita Martinez. In terms of world ranking, they were even-steven. Martinez was seeded third; Navratilova was fourth. But Martinez was a clay-court specialist; Navratilova's game was most suited for grass. Martinez hadn't won a single grand slam title; Navratilova had 18 singles titles. It was David v/s Goliath.

Martinez won. To Navratilova's dismay, that Wimbledon victory was Martinez's only grand slam victory; a fact that remained with Navratilova for a long time to come. Navratilova retired at the end of 1994.

In 1999, Steffi Graf was in fine form. But age was catching up and the Williams sisters had burst upon the scene. Time was running out. In May, she shocked the world when she beat the number one ranked player at the time, Martina Hingis at the French Open finals. She continued her good run and reached the Wimbledon finals the following month. Her opponent: Lindsay Davenport who was the reigning US Open women's singles champion and ranked number two in the world. Although Davenport was a formidable opponent, Graf was the sentimental favourite. Having won seven Wimbledon singles titles by then, she was only two shy of equaling Navratilova's record of nine single's titles. 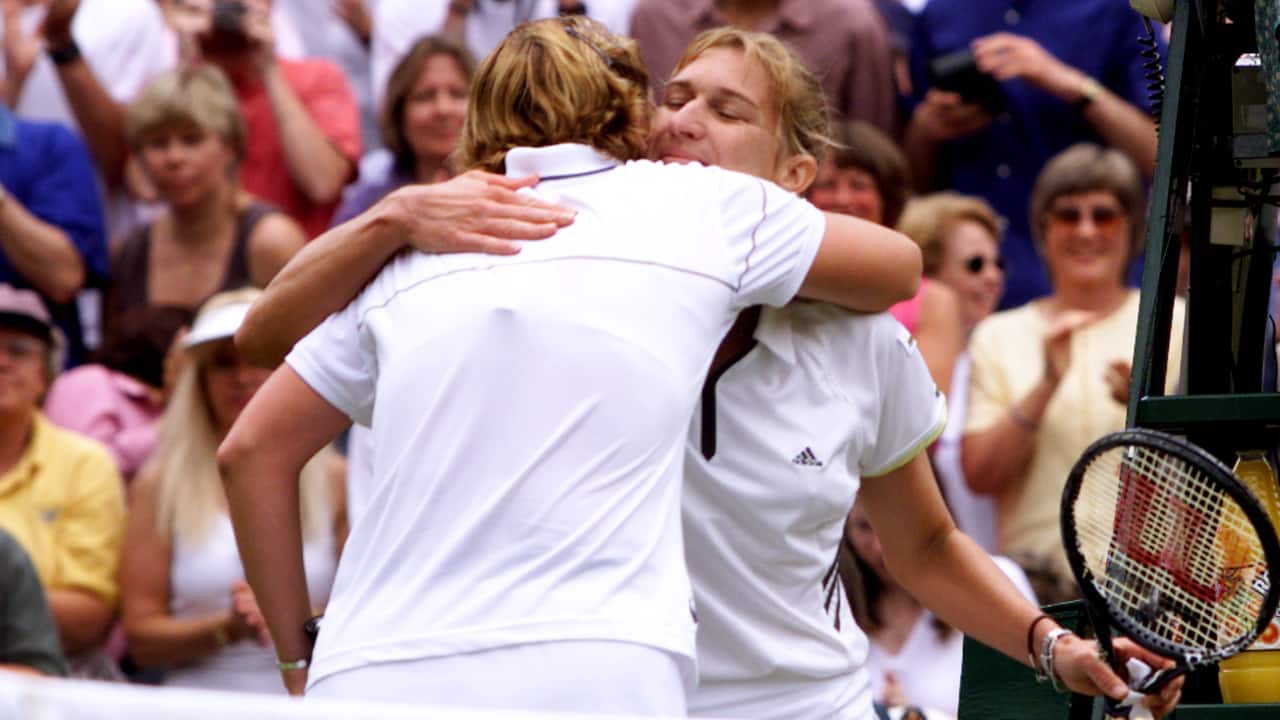 Lindsay Davenport of the US (L) and Germany’s Steffi Graf embrace at the end of the women’s Singles competition at the Wimbledon Tennis Championships on July 4. Davenport won the match 6-4 7-5. (PC-Reuters/Kieran Doherty)

In the finals, she was no match for Davenport. Graf lost in straight sets. A month later, Graf retired from professional tennis. But in an interview that she gave later, she had said that had she won that Wimbledon final in 1999, she may have been tempted to enter the Championships one more time the following year to have a go at Navratilova's record. Who would have known what had happened had Graf won her 8th Wimbledon singles title!

Up until Wimbledon 2019, Roger Federer was ahead of the race in the total number of grand slam men's singles titles won. He had won 20 by then, followed closely by Rafael Nadal of Spain with a tally of 18 Slams. Novak Djokovic had won 15 slams by then. Federer was still fighting to stay ahead. And he was enjoying a bit of a career resurgence; having won three grand slam titles between 2017 and 2018. En route to the finals at the Championships in 2019, he beat Nadal in four sets. That ought to have boosted his chances, not to mention his morale. Switzerland’s Roger Federer poses with the runners up trophy after losing the final as Serbia’s Novak Djokovic inspects the trophy. (REUTERS/Toby Melville)

The year of 2019 was the first time at Wimbledon where a tie break was introduced in the final set. And that same year, the final match between these two great champions was decided by a tie-breaker. Djokovic won the match and the title, but more significantly after saving two match points; ironically for the third time against Federer in their careers. Federer has yet to win another Slam after that; Nadal won two slams after that and Djokovic won five slams, both equalled Federer's all-time grand slam tally at 20.

If Federer had won that Wimbledon final- and the rest of the Slams went the way they did- Federer would have still been ahead of the pack as of today. Djokovic would have had to still win two more Slams to just equal Federer's record. On the contrary, now he just needs to win one more grand slam to have the most number of grand slam men's singles titles.

Although Novak Djokovic had won a non-calendar year grand slam in 2015-16, a calendar year slam would have been great. The only player in the open era to have accomplished this was Rod Laver in 1969.

The year 2021 was tough already. Covid-19 pandemic continued. The tennis tour was limping back to a full- and re-worked- schedule. Players and their entourages had to stay in bubbles and follow strict quarantine rules that isolated them from their families and friends. Global travel was- and still is- a risk. (L-R) Novak Djokovic of Serbia and Daniil Medvedev of Russia celebrate with the finalist and championship trophies, respectively, after their match in the men’s singles final on day fourteen of the 2021 US Open tennis tournament at USTA Billie Jean King National Tennis Center. (Mandatory Credit: Danielle Parhizkaran-USA TODAY Sports)

In the middle of this, Djokovic started amassing his titles. One by one. The Australian Open was relatively convincing, but the French Open was tough. After having won Wimbledon, travels to Tokyo (Olympics) and then to the US (hard court season) wasn't easy. But it was part of the job profile and Djokovic braved it all for a shot at history. Alas, he ran into one of his toughest opponents, Medvedev. Although Djokovic may still win more slams than Nadal and Federer, Sunday's loss would rankle, to say the least.

Five most irreversible Grand Slam tennis losses in recent memory have 1757 words, post on www.moneycontrol.com at September 14, 2021. This is cached page on Europe Breaking News. If you want remove this page, please contact us.