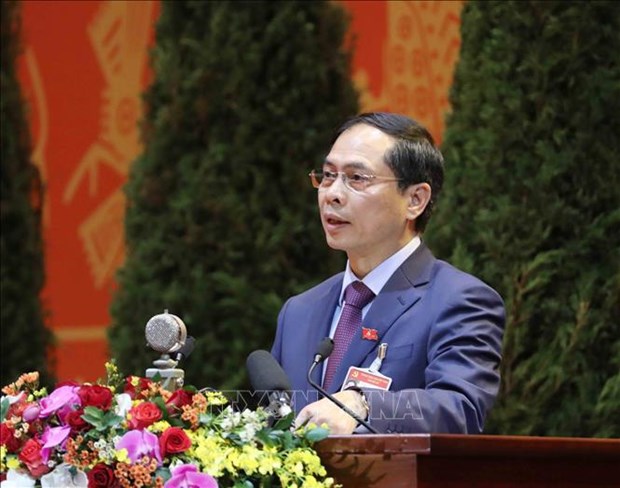 Hanoi (VNA) – The diplomatic sector has significantly contributed to maintaining a peaceful, stable environment favourable for national development, as well as national security, according to Bui Thanh Son, Deputy Minister of Foreign Affairs .

In a presentation at a working session of the ongoing 13th National Party Congress on January 27, Son said the sector has made noted contributions over the past five years through a good combination of Party, State and people-to-people diplomacy.

During the 12th tenure, despite great difficulties and challenges, with the latest the COVID-19 pandemic and the global economic downturn, fierce competitions between powers, along with emerging security issues, Vietnam's diplomacy has joined hands with the entire Party, people and army to successfully implement external affair guidelines set by the 12th National Party Congress .

The diplomatic sector has partnered with national defence and security forces in safeguarding the country's sovereignty over its sea and islands.

Amidst the complex development of the East Sea issue, Vietnam has been able to mobilise international support to oppose unilateral infringement, advocate the settlement of disputes through peaceful measures in line with international law, while maintaining stable relations with relevant neighbouring countries, Son said.

Regarding land border, the official highlighted the ratification of two legal documents recognising the completion of 84 percent of work in border demarcation and marker planting between Vietnam and Cambodia.

The country has also coordinated well with Laos and China in managing their common border lines.

Thanks to such efforts, the country has built and consolidated a land border of peace, friendship, cooperation and development with all neighbours, he stressed.

The sector has also helped to attract huge resources for national socio-economic development and reform, he said, citing the signing of five free trade agreements (FTAs), including new-generation, high-standard ones with key partners, which put Vietnam at the centre of a network of 16 regional FTAs.

In his report, Son also reviewed citizen protection work in the 12th tenure, with about 80,000 Vietnamese citizens brought home from more than 60 countries and territories worldwide amidst COVID-19. More than 50,000 citizens, including nearly 10,000 fishermen, have received protection during the past tenure.

Overseas Vietnamese have put more trust in the Party and the State, and actively contributed to national construction in terms of both knowledge and economic resources, sending home nearly 90 billion USD in remittance during the 2016-2020 period, according to the official.

Son said diplomacy has played a significant role in raising the country's position, as reflected through its hosting of the Asia-Pacific Economic Cooperation (APEC) forum in 2017, the World Economic Forum on ASEAN in 2018, the 26th Annual Meeting of the Asia-Pacific Parliamentary Forum in 2018, the summit between the US and the Democratic People's Republic of Korea (DPRK)  in 2019, its ASEAN and AIPA Chairmanship last year, and non-permanent membership of the UN Security Council for 2020-2021.

Son attributed those achievements to the Party's sound, comprehensive and absolute leadership, the flexible application of President Ho Chi Minh's diplomatic ideology, as well as the country's flexible adaptation to changes.

He proposed key tasks in external affairs in the upcoming tenure, including deepening political trust and combining interests with 30 strategic and comprehensive partners, with development put at the centre of relations, and Asia-Pacific as the strategic region, while enhancing relations with other potential partners in the region.

It is a must to step up international integration intensively and extensively, advance multilateral diplomacy, and more actively engage in such multilateral mechanisms like ASEAN, the UN and Mekong cooperation, he continued.

More efforts are needed to promote multilateralism and international law, he said, highlighting the significance of economic diplomacy in national development.

Diplomacy should join in preventing and eliminating security risks early on and from afar through promoting dialogues, building trust, and advocating preventive diplomacy and respect for law, the Deputy Minister emphasised.

Diplomacy will continue to serve as a firm bridge connecting 5.3 million Vietnamese abroad with their homeland, enabling them to contribute to national development and integration, Son said/.

Diplomacy helps create favourable environment for national development: official have 933 words, post on en.vietnamplus.vn at January 28, 2021. This is cached page on Europe Breaking News. If you want remove this page, please contact us.