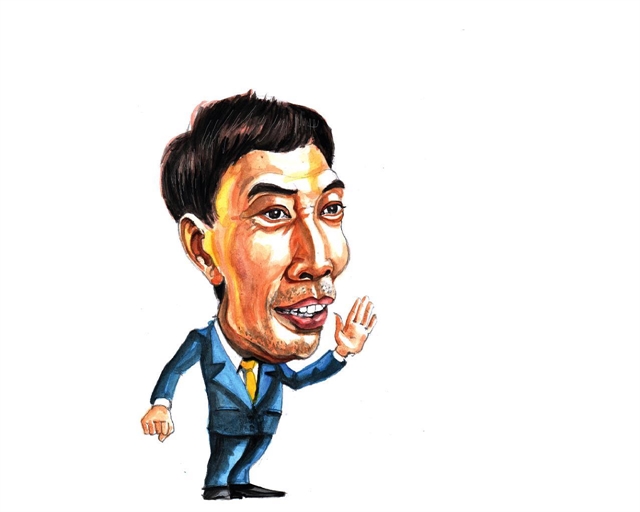 While many places in Việt Nam are struggling to fight the COVID-19 pandemic, the six-month economic picture still delivered optimistic data, showing the recovery process is continuing and partly overshadowing the challenges the country is facing to achieve its dual targets.

The recovery process is demonstrated in some important figures including the gross domestic product (GDP), disbursement of foreign direct investment (FDI), industrial production, entries of new enterprises and trade.

Việt Nam's GDP expanded by 5.64 per cent in the first half of this year, much higher than the 1.82 per cent rate recorded in the same period last year. Although this number was lower than the pre-pandemic rates, it showed the macro-economy remained stable with improving production and business.

Industrial production increased by nearly 9 per cent, almost equivalent to the pre-pandemic 2019's first half and higher than the rate of 2.91 per cent in the same period last year, of which the manufacturing and processing industry grew 11.4 per cent.

Regarding foreign investment, though the value of FDI decreased slightly in the first half, the disbursement of foreign capital in the period rose 6.8 per cent year-on-year, demonstrating foreign investors' confidence in Việt Nam's economy.

Merchandise export continued to expand significantly with the growth of 28.4 per cent in the first six months. 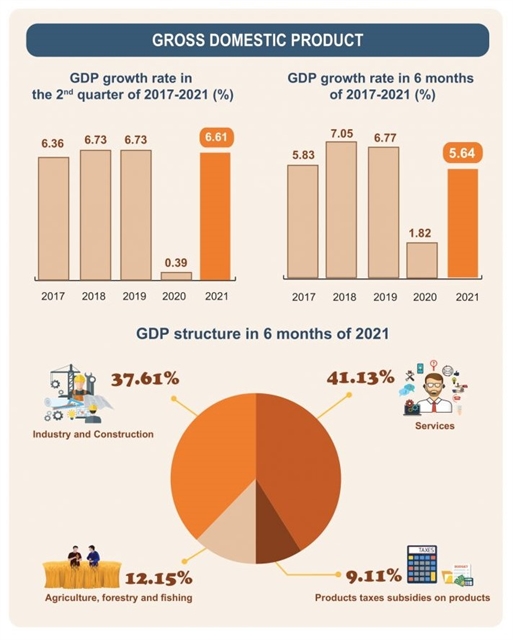 Việt Nam’s GDP in the second quarter and first half of 2021. — Photo gso.gov.vn

Despite the pandemic, the number of newly-established enterprises hit a record high with more than 67,000 new firms opening in the first six months, while the capital registered to be poured into the economy also set a new record.

Although these results are encouraging, especially with Việt Nam still trying to control the spread of the COVID-19 in the Southern region, these numbers have not met the Government's expectation despite targets being lowered after the first quarter.

Like what the world economy is facing, Việt Nam must tackle challenges on its path to recovery.

These issues include the scarcity of production inputs such as semiconductor chips, animal feed, iron and steel. Prices of these materials and other agricultural products have increased sharply and this situation could last until the end of this year and even into the next year, posing an inflation threat.

Việt Nam's inflation remained low in the first half with the consumer price index rising just 1.47 per cent but the pressure of "cost-push" inflation is also a challenge in the future. US inflation is the highest it has been in 13 years as prices surged 5 per cent in May. Although it may only be "temporary", Fed must also reconsider its previously announced policy of maintaining loosen monetary policy until the end of 2022.

In addition, Việt Nam's logistic capacity is also a problem as many enterprises have recently complained about the shortage of empty containers and high logistic costs.

The business community is also still facing a lot of difficulties. Every month about 12,000 firms had to be closed or stop operations temporary.

More worryingly, the spread of virus this time hit important industrial zones – Bắc Giang and Bắc Ninh in the North – Việt Nam's centres for manufacturing exported electronic equipment and components. It is also threatening to expand its reach to southern industrial clusters.

Government leaders have many times repeated their request, asking localities to persistently and resolutely implement the dual goals of preventing the COVID-19 pandemic and promoting socio-economic development.

However, the growth target of 6.5 per cent for 2021 set by the National Assembly seems out of reach now and the Government's 6 per cent expectation is also no longer an easy target.

Last week, the Ministry of Planning and Investment (MPI) devised two growth scenarios for the second half of the year. Under the first scenario with a growth target of 6 per cent for the whole year, growth in the last two quarters should reach 6.2 per cent and 6.5 per cent, provided that the pandemic is basically curbed in July and there are no pandemic clusters in industrial parks and no social distancing in major cities and provinces. Meanwhile, to achieve a 6.5 per cent growth this year under the second scenario, the country must reach growth of 7 per cent in the third quarter and 7.5 per cent and above in the fourth quarter.

Economists are discussing a worse case scenario with a growth rate of more than 5 per cent as the threat of disease is always present and the vaccine strategy to achieve herd immunity could only be attained next year at the earliest.

Government last week issued Resolution No 68 targeting support to employees and employers in industrial zones and export processing zones worth a total VNĐ26 trillion ($1.13 billion). This is a timely decision to support hard-hit workers and business owners in important economic activities.

However, supporting directly-affected people is not enough. The past lessons in pandemic control efforts of provinces in this wave showed that creativity and initiatives of localities still need the leadership of the Government and coordination among provinces to reduce the adverse impacts on the circulation of goods as the pandemic levels are different among provinces.

This year, public investment plays a very important role in reviving the economy but as the prices of some important materials are rising, damaging motivation and interest of contractors so many projects are being delayed again. The Government should find a way to handle this problem soon.

In addition, making effective use of support packages is essential. Support is not only to help people and enterprises overcome difficulties but to catch up with the recovery – predicted to be very strong this year – of the world economy.

Facing many obstacles, Việt Nam also has advantages to realise its dual goals, including strong determination of the Government to implement the vaccine strategy, stable macro-economic conditions, stronger and more flexible support packages (MPI is consulting related ministries and agencies to launch a new support package for businesses, hopefully being introduced in July this year).

Public debt also remained low with the public debt/GDP ratio in 2020 reaching 55.8 per cent (or 47 per cent adjusted GDP), much lower than the ratio of 62 per cent by the end of 2015. Budget revenue was also quite good in the first half.

Other favourable conditions include clearer recovery in economic world, especially in major trading partners of Việt Nam such as the US, EU and China. In addition, Việt Nam is still an attractive destination for foreign investors.

The world is a volatile place at the moment with many risks and uncertainties. It is very important to take advantage of opportunities, govern policies, control risks, push up the implementation of vaccine campaign and support packages. We hope that Việt Nam can attain the growth rate of 6 per cent this year, creating momentum for the continued recovery next year, and more importantly catching up with the strong recovery in the region and the world.

*Võ Trí Thành is a former vice-president of the Central Institute for Economic Management (CIEM) and a member of the National Financial and Monetary Policy Advisory Council. The holder of a doctorate in economics from the Australian National University, Thanh mainly undertakes research and provides consultation on issues related to macroeconomic policies, trade liberalisation and international economic integration. Other areas of interest include institutional reforms and financial systems.

Việt Nam's growth opportunity in 2021: catching up with the world have 1518 words, post on vietnamnews.vn at July 6, 2021. This is cached page on Europe Breaking News. If you want remove this page, please contact us.