Australia and New Zealand will not compete in the Rugby League World Cup at the end of the year due to coronavirus concerns.

The tournament is set to be held in England between 23 October and 27 November.

The news will come as a blow for organisers who thought they had fended off fears from the two associations.

“The ARLC and NZRL have again requested the RLWC2021 be postponed until 2022 to minimise risk of players contracting COVID-19 and ensure the best outcome for player wellbeing,” they said.

It remains to be seen whether the tournament can now go ahead without Australia, who have won the title a record 11 times, and 2008 champions New Zealand.

NZRL chief executive Greg Peters said there were “stark differences” between the management of the pandemic in the UK and Australasia and recent developments show how quickly things can change.

He said: “The tournament organisers have moved heaven and earth to make this work, so it is not an easy decision, but the COVID-19 situation in the UK shows no sign of improving, and it’s simply too unsafe to send teams and staff over.” 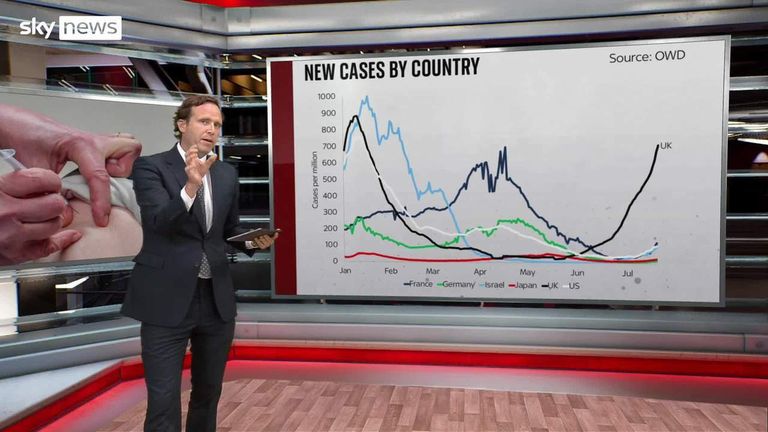 How does UK COVID rate compare with other nations?

Simon Johnson, chairman of the Rugby Football League, hit back at the decision, saying organisers had “bent over backwards and turned double somersaults to meet every single requirement that was asked of them, by the Australians particularly”.

“I am angry about this,” he said. “This is a selfish, parochial and cowardly decision which has been taken by the Australian and New Zealand leadership.”

In response to Australia and New Zealand’s announcement, World Cup 2021 organisers released a statement saying they were disappointed by the move, which could have “wide ranging implications”.

“RLWC2021 were informed at very short notice and will continue discussions with all stakeholders to agree on the best way forward. A further statement will be made in due course,” they added.

The PA news agency understands the tournament officials were given just four minutes’ notice of the announcement.

The tournament was due to include 16 teams for the first time – an increase of two from the previous two tournaments.

COVID-19: Australia and New Zealand withdraw from Rugby League World Cup in England over coronavirus concerns have 763 words, post on news.sky.com at July 22, 2021. This is cached page on Europe Breaking News. If you want remove this page, please contact us.