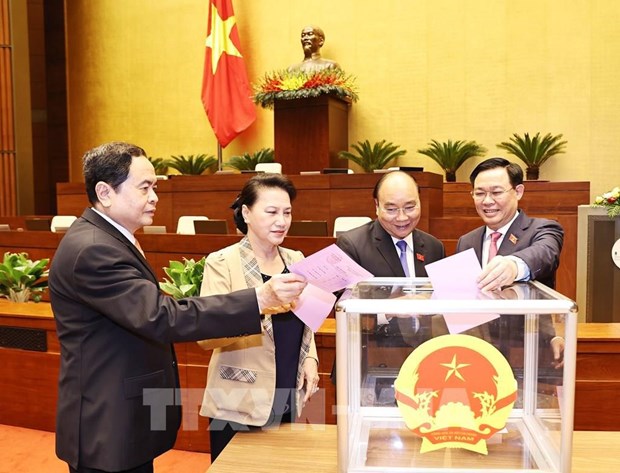 Hanoi (VNA) – The National Assembly will elect some new vice chairpersons of the legislature on April 1 morning, in line with the working programme of the 14th NA 's 11th sitting .

The voting will be held after the NA approves a list of candidates for the posts.

After the voting's results were announced, the NA deputies will then adopt a resolution on the election of NA vice chairpersons.

Later in the morning, lawmakers will debate the State Audit of Vietnam (SAV)'s report on its performance in the 2016-2020 tenure.

In the afternoon, a plenary session will be held for the lawmakers to discuss a proposal on the number of full-time deputies to the Hanoi People's Council in the 2021 – 2026 tenure.

At around 4:30pm, State President Nguyen Phu Trong will deliver a proposal on relieving the Prime Minister and the proposal will then be discussed in groups of legislators./.

National Assembly to elect vice chairpersons on April 1 morning have 385 words, post on en.vietnamplus.vn at April 1, 2021. This is cached page on Europe Breaking News. If you want remove this page, please contact us.