Average house prices in Britain surged by nearly £16,000 in year to hit a new record high in April, according to an index.

For the price, Britons could get their hands on a four-bedroom, semi-detached home in Guisborough, North Yorkshire, or a three-bedroom new build in Sheffield.

Nationwide said an extension of stamp duty holiday in the Budget has been key to bolstering the housing market following a slowdown of growth in March.

However, research found that ‘while the stamp duty holiday is impacting the timing of housing transactions, for most people it is not the key motivating factor prompting them to move in the first place.’

Instead, three-quarters of those surveyed at the end of April said they would be moving regardless of the extended stamp duty holiday. 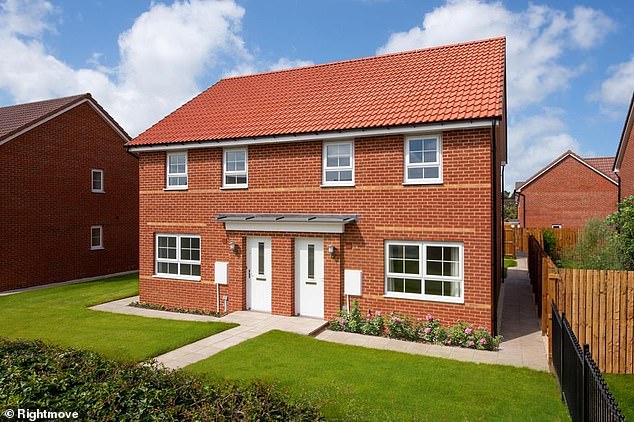 The current UK house price is now at £238,831, which could buy a homeowner this three-bedroom new build property in Sheffield 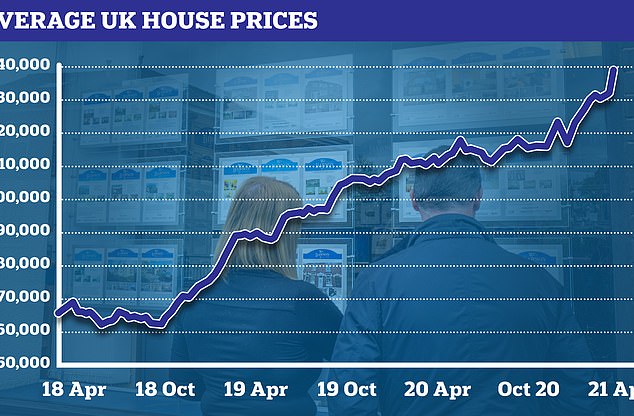 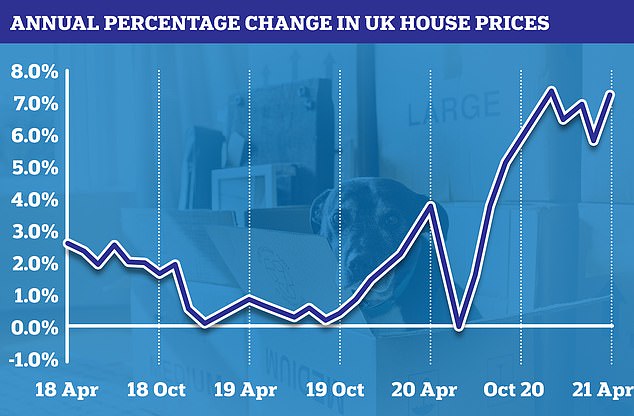 Annual house price growth rebounded to 7.1 per cent in April, from 5.7 per cent in March.

Nationwide predicts that annual house price growth will reach double digits by this summer, if prices hold steady over the next couple of months.

Robert Gardner, Nationwide’s chief economist, said: ‘Annual house price growth accelerated to 7.1 per cent in April, only slightly below the peak of 7.3 per cent recorded in December and up from 5.7 per cent in March.

‘In month-on-month terms, house prices rose by 2.1 per cent in April, after taking account of seasonal effects, the biggest month rise since February 2004.

‘However, our research suggests that while the stamp duty holiday is impacting the timing of housing transactions, for most people it is not the key motivating factor prompting them to move in the first place. 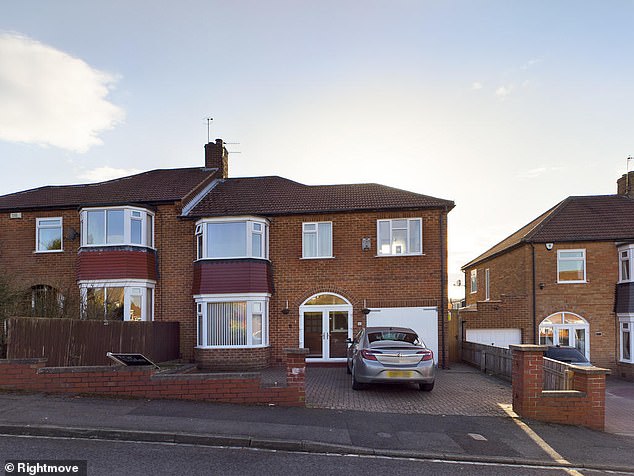 Nationwide said an extension of stamp duty holiday in the Budget has been key to bolstering the market following a slowdown in house price growth in March. Pictured: A four-bedroom property in Guisborough on the market for £240,000 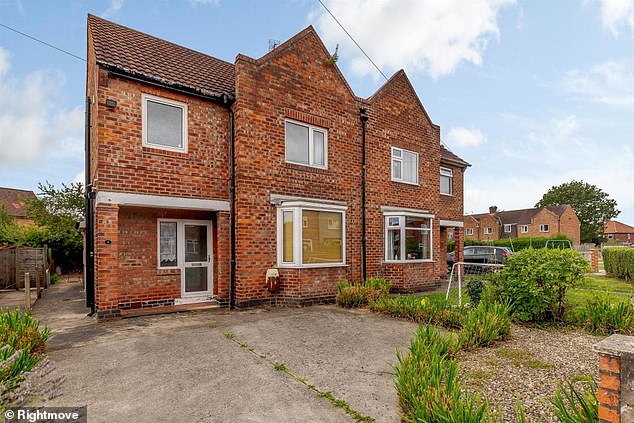 House prices jumped by 2.1 per cent month-on-month, marking the biggest monthly increase since February 2004. Pictured: A £235,000 property in York

‘For example, amongst home owners surveyed at the end of April that were either moving home or considering a move, three-quarters said this would have been the case even if the stamp duty holiday had not been extended.’

Mr Gardner said activity is likely to remain ‘fairly buoyant’ over the next six months as a result of the stamp duty extension in England and Northern Ireland and additional support for the labour market included in the Budget.

Low borrowing costs and many people remaining motivated to move as a result of changing housing preferences during the pandemic are also expected to support housing market activity.

Mr Gardner added: ‘With the stock of homes on the market relatively constrained, there is scope for annual house price growth to accelerate further in the coming months, especially given the low base for comparison in early summer last year. 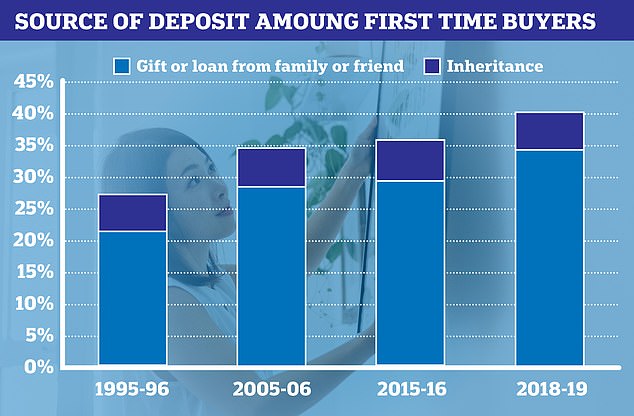 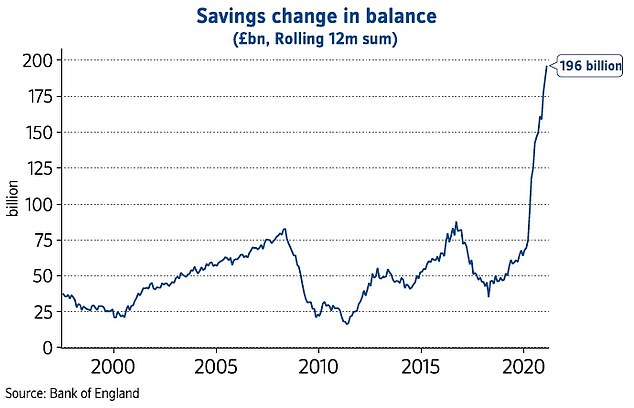 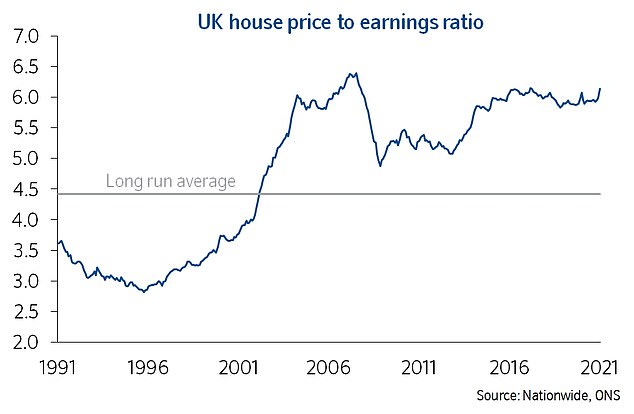 ‘Indeed, if house prices remain flat in month-on-month terms over the next two months, the annual rate of growth will reach double digits in June.

‘Further ahead, the outlook for the market is far more uncertain. If unemployment rises sharply towards the end of the year as most analysts expect, there is scope for activity to slow, perhaps sharply.

‘However, shifts in housing preferences may continue to support activity, even if labour market conditions weaken.’

Mr Gardner said that bearing in mind only five per cent of the housing stock typically changes hands in a given year, it only requires a relatively small proportion of people to follow the desire to move to have a material impact.

Samuel Tombs, chief UK economist at Pantheon Macroeconomics said that annual house price growth of at least 10 per cent by June ‘looks likely, given the continued strength of demand indicators. 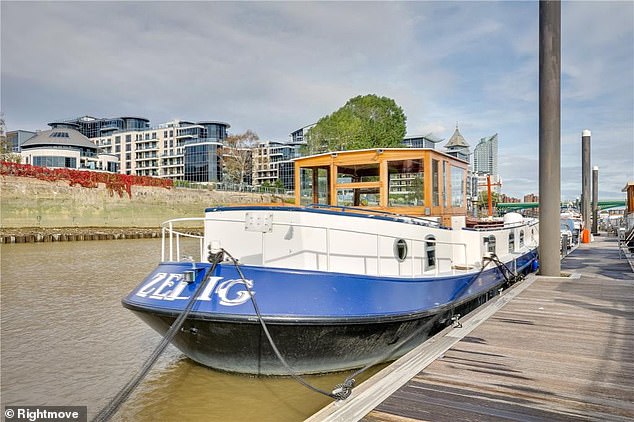 Those spending the average house price could also buy this houseboat on Imperial Wharf Moorings, London 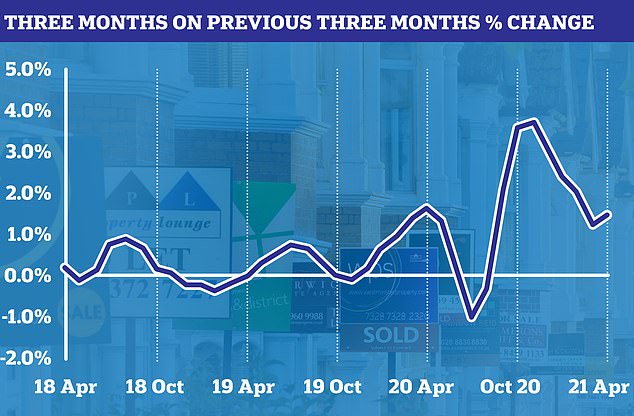 ‘For instance, Google Trends data indicate that visits to one of the three main property websites this month have been 29 per cent above their average for the time of the year, a step up from 25 per cent above in March.

‘Similarly, the number of registered house hunters per estate agents’ branch in March was 24 per cent above its average level in the 2010s, a small rise from 23 per cent in February, according to the National Association of Estate Agents.’

‘An increase in new housing supply and a reassessment by households of their spending priorities as the virus recedes also likely will undermine demand by year-end.

‘The upshot is that we doubt house prices will be materially higher at the end of this year than at present.’

Jeremy Leaf, a north London estate agent and a former residential chairman of the Royal Institution of Chartered Surveyors (Rics) said: ‘The bounce-back highlighted by the Nationwide figures, which we have also seen on the ground, should be sufficient to ensure there is no price correction when the stamp duty holiday starts to taper off at the end of June.’

He added: ‘Broader rollout of the vaccine and easing of lockdown restrictions is increasing confidence in the economy.

‘This economic recovery is giving an additional boost to housing market activity rather than the housing market supporting the economy, which was the case when the pandemic first struck.’

Average house prices surge by nearly £16,000 in year to hit record high of £238,831 in April, Nationwide figures show have 1164 words, post on www.dailymail.co.uk at April 30, 2021. This is cached page on Europe Breaking News. If you want remove this page, please contact us.