The US said Saturday it plans to speed up efforts to expel thousands of Haitian migrants who were gathered under a bridge at the US-Mexico border , forcing its closure and a rerouting of traffic to other border crossings.

The Val Verde County Sheriff Frank Joe Martinez told the Associated Press on Friday that there were about 13,700 new arrivals in Del Rio, Texas, a city of 35,000 people located 145 miles (233 kilometers) west of San Antonio.

Del Rio is in a remote section of the border and the town lacks the capacity to hold and process such a large number. The new arrivals have made their own encampment, pitching tents and bathing and washing clothing in the river, AP reported.

US officials react with alarm and consternation

In a statement on Saturday, the Department of Homeland Security (DHS) said it had relocated approximately 2,000 migrants to other locations to process their arrival and determine if they would be eligible for removal. DHS also said an additional 400 border agents would arrive by Monday. 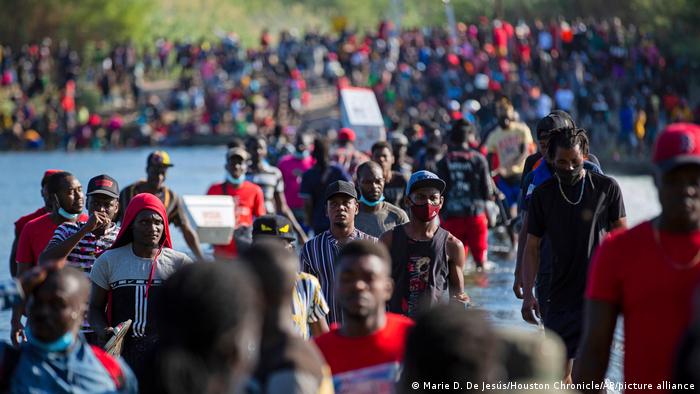 “We have reiterated that our borders are not open, and people should not make the dangerous journey,” a DHS spokesperson told Reuters news agency.

On Friday, border agents closed traffic in both directions for vehicles and pedestrians “to respond to urgent safety and security needs.”

Travelers were being redirected to the Eagle Pass border crossing some 57 miles (91 kilometers) away.

The situation in Del Rio poses political and humanitarian challenges for the Biden administration.

At the start of the pandemic in March of 2020, the US Centers for Disease Control (CDC) issued a public health order known as “Title 42.”

The sweeping legislation issued under former President Donald Trump allows most migrants to be removed quickly without a chance of claiming asylum.

US VP Kamala Harris in Mexico to address illegal migration

On Thursday, a judge ruled the policy could not be applied to families, but the ruling will not go into effect for another two weeks. Meanwhile, the Biden administration is appealing the decision.

Prior to making the perilous journey north to try and enter the US, many of the Haitians lived and worked in Latin America in sectors like construction but were unable to normalize their status.

Before setting out for the US-Mexico border, they found news on Facebook and shared tips in WhatsApp groups, some of it misleading, they conceded to Reuters, in suggesting greater ease than reality permits when it comes to crossing into the US.

Haiti is still reeling from a political crisis caused by the assassination of its president in July and a major earthquake and storm in August that left thousands dead.

US to speed up 'removal flights' for Haitian migrants after border surge have 739 words, post on www.dw.com at January 18, 2021. This is cached page on Europe Breaking News. If you want remove this page, please contact us.