The “Islamic State” (IS) group claimed responsibility for a suicide bombing on Monday evening that killed at least 36 people and injured 60 more in a crowded eastern Baghdad market.

The attack in Iraq by the Sunni militant group came on the eve of Eid al-Adha holiday celebrations in Sadr City, a Shiite majority neighborhood that has been bombed by IS in at least two other instances this year.

“They are targeting our civilians in Sadr City on the eve of Eid,” Salih tweeted, saying the militants “do not allow people to rejoice, even for a moment.”

IS said a suicide bomber it identified as Abu Hamza al-Iraqi carried out the attack.

Although the Islamic State lost control of the northern Iraqi territory it controlled in 2017 after around three years of combat, sleeper cells and IS fighters are still very much active in the restless country.

Iraqis had gathered in the busy market to shop ahead of the Muslim festival of sacrifice. 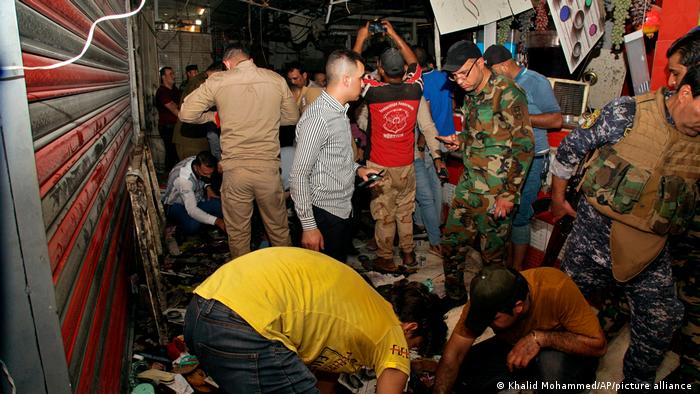 The victims were mainly women and included seven children.

Young doctor Ali Faisal told AFP many of the casualities were “dead on arrival” with the wounded suffering burns and fractures.

“I myself declared the time of death for two children, a six-year-old and an eight-year-old,” he told AFP. “A four-month-old baby was also killed.”

Jiyan -The forgotten victims of IS

“This horrible attack right before Eid Al-Adha is a terrible reminder of the violence Iraqi children continue to face,” UNICEF said in a statement.

The US State department condemned the Iraq terrorist attack “in the strongest terms.”

Russian President Vladimir Putin said the bombing was “shocking in its cruelty and cynicism and called for the terrorists to “receive the punishment they deserve.”

“We are deeply saddened by the brutal and senseless terrorist attack in Baghdad on the eve of Eid al-Adha,” tweeted the German Embassy in Iraq.

“Our thoughts are with the families of the victims and with those injured.”

This was not the first time a bomb went off in busy areas of Sadr City. In June, a bomb placed under a kiosk in another market in the neighborhood wounded people. No one claimed responsibility for the attack.

In April, a car bomb attack in the city, claimed by IS, killed four people and injured at least 20.

At the beginning of the year, IS claimed responsibility for a bomb attack that killed more than 30 people in a centrally located market in Baghdad. That marked Iraq’s first big suicide bombing in three years.

Even though large bomb attacks were once a daily occurrence in the Iraqi capital, the number of incidents has dwindled in recent years.

The latest attack comes a little more than two months ahead of federal elections that are slated for October 10.

Iraq: Market bomb attack kills 36, including children have 694 words, post on www.dw.com at January 20, 2021. This is cached page on Europe Breaking News. If you want remove this page, please contact us.