In December 2019, Jack Egan watched his home in the Australian beachside settlement of Rosedale go up in flames.

Despite orders from authorities to evacuate , he and his partner, Cath, decided to stay and defend their home from the fires. Egan had some experience with wildfires and thought the property was savable.

“It’s definitely at your own risk if you stay — and do not expect anybody to come and help you,” Egan told DW.

The decision to stay and defend the home using a firefighting pump and hose was part of Egan’s fire plan. But when his house was caught in the blaze and the heat became too much, he was forced to stop defending his home and shelter in his neighbour’s more fireproof house.

“I don’t really like the term firefighting because it’s as though you can fight it,” says Egan. “You can’t really, you can only manage your survival and maybe direct the path of the fire if you’ve got bulldozers.”

In extreme weather events such as floods, hurricanes, and wildfires, some people will stay to defend their homes despite evacuation warnings. It is a choice more and more people will be forced to make as the planet heats up.

“Home is really almost indistinguishable from who we are,” says Frank McAndrew , a social psychologist and professor of psychology at Knox College in the US. “It is the one place in the world that we supposedly have control over. No one else can even come in there without our permission.”

For many people home is more than a shelter. It’s their safe space, a place they have made their own, filled with items that connect them to their past, and where memories were made.

“It’s the repository of all of the things that make you who you are,” McAndrew says. 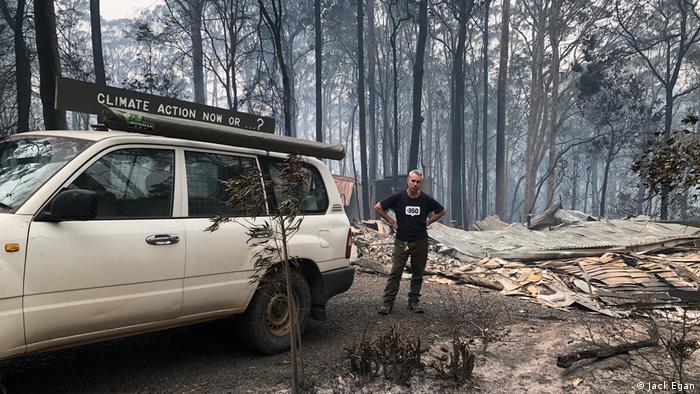 Jack Egan’s home after the fire in December 2019 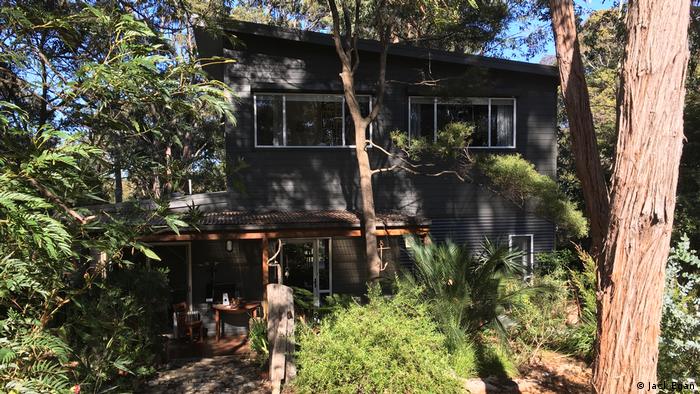 Jack Egan’s home before the blaze

There are many reasons why someone might not evacuate despite serious risk to their life. Depending on the type of hazard, the advice might even be to stay inside the home.

Some people’s entire livelihoods are tied up in their homes. Insurance for damage caused by extreme weather events may be too costly for some, while others who live in risk areas can find it difficult, and sometimes even impossible, to find a company that will insure their property.

One of the lessons learned from Hurricane Katrina — a category 5 hurricane that hit the US in 2005 and killed more than 1,800 people — was that some people were not willing to leave their pets behind. This has led to the creation of evacuation areas specifically for animals.

In some cases, such as with the July floods in northern Europe , warnings that come too late or not at all take the decision out of people’s hands. In these situations, it might even be safer for people to stay in their home, said Sarah McCaffrey , a social scientist for the Rocky Mountain Research Station at the US Department of Agriculture’s Forest Service.

Some people stay because they have a business they want to save, or they believe they can protect their home.

Similar concerns were seen in research that looked at people living in three cyclone-prone coastal sites in Bangladesh.

When cyclones hit the island of Mazer Char, as Cyclone Sidr did in 2007, some people could afford to leave their house and belongings behind because the cyclone didn’t impact their food security, said Sonja Ayeb-Karlsson , a senior researcher in (im)mobility, climate change and well-being at the United Nations University Institute for Environment and Human security. But others felt that this loss of assets would put their survival at risk because they wouldn’t be able to provide food for their families.

“A fisherman who had put his life savings into his fishing nets or boat may not feel that he is able to leave these behind,” Ayeb-Karlsson told DW.

In the year and a half since the pandemic began, many people will have faced some kind of uncertainty: the risk of catching COVID, standing by as loved ones battled illness in hospital or wondering when you’ll be allowed to return to your home country.

The first thing everybody does to try to deal with uncertainty is reduce that uncertainty by seeking more information, said social scientist McCaffrey

While it might seem like people don’t listen to authorities’ warnings, McCaffrey said people do pay attention to official cues. It’s just that some people will also use their own judgement.

People’s decisions in extreme weather events are driven by their risk perception: the subjective judgment they make about how likely it is to happen and how bad it will be.

McCaffrey is the lead author of a 2017 study published in the journal Risk Analysis that looked at what influences a person’s decision to respond to officials’ evacuation orders for wildfires.

The study found that while most people relied on official cues like evacuation orders to take action, a large number of people relied on a combination of official and physical cues, like seeing wildfire flames, before making a decision.

“They’re sort of doing that tradeoff between the cost of evacuating versus the cost of staying,” McCaffrey says.

What makes a life?

In 2020, a big fast moving fire came through Colorado, where McCaffrey is based. A couple in their 80s had built a house on their dream property and decided to stay with their home. They both died in the blaze.

“It was interesting to look at their kids, who were kind of saying: ‘We are so sad to lose our parents, but they died where they loved and with each other and that’s what was most important to them,'” McCaffrey said.

For Egan, the fire pushed him to change careers. Three months after the blaze, he decided to retire from his job as a carer in a residential home and become a climate activist.

“I just had the thought that the future has crashed right through into the present, the extreme weather events are already here now,” Egan said. “It galvanized me into early retirement and I’m a full time campaigner for climate action.”

He stressed that, for people who live in an area that is at risk of an extreme weather event, it is essential to have a plan.

“When it’s upon you, when it’s really happening, you can’t think very clearly,” Egan said.

Extreme weather: Why people risk their lives to save their homes have 2575 words, post on www.dw.com at January 21, 2021. This is cached page on Europe Breaking News. If you want remove this page, please contact us.