“The death rate is devastating by all measures, and the stress the pandemic is placing on our health system is unparalleled,” Kenyatta said in a televised address as the East African country stands on the brink of a third wave.

“Between January and February three people died every day from COVID. In March 2021, the number has gone up to seven every day, the highest since this pandemic hit us,” he said.

The restrictions include a pause on all movement into or from Nairobi, Kajiado, Machakos, Nakuru and Kiambu. Public gatherings are banned, and an evening curfew will be imposed to last from 8 p.m. until 4 a.m. in the affected counties.

Kenyatta also called on those eligible for the first round of vaccination to get the jab. He and his wife received the AstraZeneca vaccine.

Kenya received 1.02 million doses of the AstraZeneca jab through the global COVAX initiative.

Pfizer has begun clinical trials for its COVID vaccine in children under the age of eleven, the company said Thursday.

“Together with our partner BioNTech, we have dosed the first healthy children in a global Phase 1/2/3 continuous study to further evaluate the safety, tolerability, and immunogenicity of the Pfizer-BioNTech COVID-19 vaccine,” Pfizer told the news agency AFP.

“We are proud to start this much-needed study for children and families eagerly awaiting a possible vaccine option.”

The EU is hoping the boosted production will help accelerate the block’s vaccination drive.

Germany will require everyone entering the country by plane to undergo a coronavirus test starting on Monday night — the rule was initially planned to come into effect on Sunday but was pushed back . Previously, only travelers from high-risk areas were required to present a negative test.

The Robert Koch Institute (RKI) for infectious diseases classified France as a high-risk area due to the surge in coronavirus cases. The RKI also downgraded Slovakia and the Czech Republic from the highest-alert list to high-risk.

By Friday, 10% of the German population had received at least one vaccine dose, according to the government’s vaccination dashboard, three months after Germany administered its first COVID-19 vaccine.

A German family in lockdown

A 750 billion euro ($885 billion) EU coronavirus recovery fund was ratified by the German parliament, breaking with its tradition of tight fisted fiscal policy and caution for taking on debt. The fund aims at dragging the continent back onto a path of economic growth.

A German aircraft is due to arrive Saturday in the Brazilian city of Manaus with 80 ventilators to help one of the worst affected areas by the coronavirus pandemic. The air force soldiers are set to spend only two hours in north-western Brazil and avoid contact.

European Union leaders agreed at a summit on Thursday to increase the production of COVID-19 vaccines in Europe. The bloc also increased control over exports of COVID vaccines outside of the EU in a bid to combat vaccine shortages.

In Italy , the southern Campania region signed an agreement to buy the Sputnik V vaccine once the EMA authorizes the Russian jab.

Campania has been one of the hardest-hit areas since the pandemic hit Italy.

Some businesses in the United States are offering their workers incentives to take the vaccines.

Many grocery chains offering two to four hours of paid leave time for employees to get vaccinated, while others are offering transportation, and bonuses of up to $500 (€424).

These businesses are most where the workers are at a high risk of contracting the virus, such as slaughterhouses, supermarkets, and farms.

California’s Bolthouse Farms has been paying $500 to all full-time employees who take the jabs while Kroger, the largest grocery chain in the country, is giving $100 to those who are vaccinated.

Peru’s Health Minister Oscar Ugarte said that a study based on a sampling throughout Lima showed that the new Brazilian variant was responsible for 40 percent of infections in the capital city.

Peru has a 2,800-kilometer-long border with Brazil and first detected the variant in January in its Amazonian region of Loreto.

Uruguay , which until recently was praised for its management of the pandemic and ability to limit its spread without going into a lockdown, is now confronted by a “complex situation,” President Luis Lacalle Pou said.

The new variant has put Uruguay’s health system under pressure.

Argentina will suspend flights from Brazil, Chile, and Mexico starting Saturday to prevent the spread of different variants of the coronavirus from entering the country .

Travelers returning from abroad will also be tested for COVID-19 before boarding a flight, upon arrival and seven days later, local media reported.

“Until further notice, regular flights will be suspended from… Chile, Brazil, Mexico,” the Argentinian government said in a statement.

A similar measure was already in place for flights from the United Kingdom after a new variant was detected there in December.

The Latin American country has so far registered more than 2.2 million cases of COVID-19, and over 55,000 deaths.

Paraguay is running out of beds in intensive care units, while President Mario Abdo’s handling of the coronavirus crisis has led to protests demanding his resignation.

Mexico surpassed 200,000 coronavirus death, becoming the third country in the world to cross this bleak milestone.

The total number of fatalities now stands at 200,211, the health ministry said.

As the country prepared for the Easter holidays around the start of April, Hugo Lopez-Gatell, Mexico’s top infectious disease expert warned of the risk of a new wave of infections.

Colombia has approved the emergency use of Johnson and Johnson’s single-shot COVID-19 vaccine, the director of the food and drug regulator INVIMA said on Thursday.

“In its capacity as regulator, INVIMA has authorized the emergency use of the vaccine from the pharmaceutical company Janssen, of the multinational Johnson & Johnson Colombia,” INVIMA director Julio Cesar Aldana said.

The J&J vaccine is single-shot and has less demanding storage needs than some other approved vaccines, he said.

Nepal relaxed quarantine rules for visitors on Friday, in a bid to draw more climbers to Mount Everest . Under the new rules, visitors will still need to present proof of vaccination or a negative PCR test before entering the country. 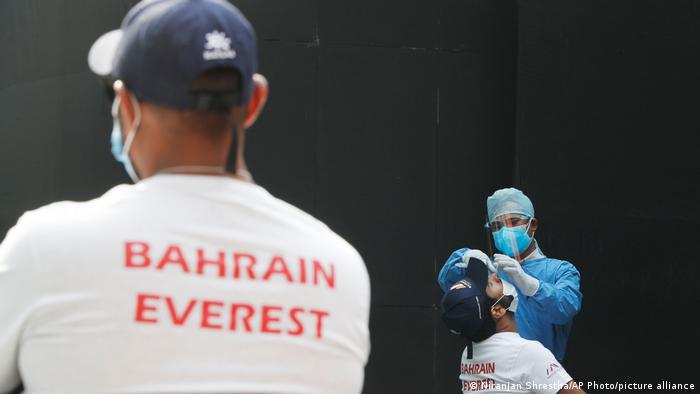 Australia on Friday reported its first locally acquired coronavirus case in more than a week after a 26-year-old man in Queensland tested positive.

The person has been infectious for a week but remained isolated at home since developing symptoms on Monday, Queensland state Premier Annastacia Palaszczuk said.

Every third Ethiopian could be infected with COVID-19, the country’s national public health institute said on Thursday, calling the situation “alarming.”

Local media reported that all of the East African nation’s intensive care units were occupied, and no oxygen tanks were available.

Ethiopia is among the five African nations worst affected by the pandemic.

Coronavirus digest: Nairobi goes into partial lockdown have 2313 words, post on www.dw.com at January 26, 2021. This is cached page on Europe Breaking News. If you want remove this page, please contact us.