China’s climate envoy announced a deal on Wednesday to boost cooperation with the United States to combat the climate crisis.

The announcement came as negotiations at the UN climate conference approached their conclusion, with the goal of securing final pledges before it wraps up on Friday.

It also comes after US President Joe Biden criticized Chinese President Xi Jinping for not making an appearance at the UN climate conference in Glasgow.

The US and China are the world’s top two greenhouse gas emitters — accounting for around 40% of global emissions.

What did Beijing and Washington agree?

China’s climate envoy Xie Zhenhua said the plan would involve “concrete plans” for enhanced action this decade and a willingness for the US and China to talk about the “finalization of the Paris Agreement rulebook.”

The Paris Climate Agreement dates back to COP21,which was held in 2016 in Paris.

“Both sides recognize that there is a gap between the current effort and the Paris Agreement goals, so we will jointly strengthen climate action,” Xie said. He added that the two sides agreed “to facilitate an outcome that is both ambitious and balanced.”

“It’s beneficial not only to our two countries but the world as a whole that two major powers in the world, China and the US, shoulder special international responsibilities and obligations,” Xie told reporters. 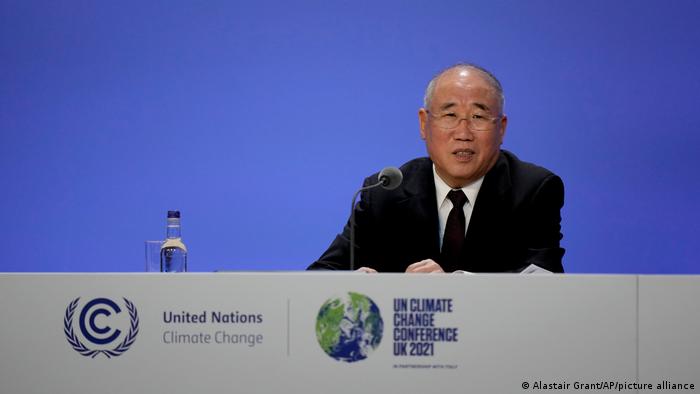 The joint statement itself is less clear with concrete details, but carries more political significance as the two economic rivals pledged to put aside differences to tackle climate change.

The agreement does, however, contain a specific focus on curbing methane emissions. Beijing and Washington have also agreed to meet regularly to address climate issues and both “recognize the seriousness and urgency of the climate crisis.

The US has set a goal to reach “100% carbon pollution-free electricity” by the year 2035. China, meanwhile pledged to “phase down” coal consumption.

“The whole point of this is that the steps we’re taking we believe can answer questions people have about the pace at which China is going and help China and us to be able to accelerate our efforts,” US special climate envoy John Kerry told reporters in Glasgow.

How was the agreement received?

The unexpected pact was widely welcomed by international leaders.

“Tackling the climate crisis requires international collaboration and solidarity, and this is an important step in the right direction,” UN Secretary General Antonio Guterres wrote on Twitter.

“It’s really encouraging to see that those countries that were at odds in so many areas have found common ground on what is the biggest challenge humanity faces today,” he told Reuters news agency.

This is a developing story and will be updated.

COP26: China agrees to 'ambitious' climate action plan with US have 732 words, post on www.dw.com at January 10, 2021. This is cached page on Europe Breaking News. If you want remove this page, please contact us.