When Algerian-born Serge Carel joined the army of colonial power France during the Algerian war of independence in 1957, he felt incredibly proud.

“My whole family was working with the French — we’ve always loved France,” Carel told DW, while sitting in an armchair in his home 50 kilometers south of Paris.

Joining the Algerian National Liberation Front, known as FLN, would have been a “betrayal,” he said, “as I’d have had to shoot at my own family.”

By turning his back on his Algerian roots, he had hoped to adopt a new, French identity. He became a so-called “Harki” (Arabic for “movement”), an Algerian auxiliary in the French army.

But little did he know of the pain that this decision would entail throughout his life.

In Algeria, the French army employed the 20-year-old as a translator and intelligence advisor.

“I was part of the avant-garde, as I knew the land very well,” the now 84-year-old said, showing yellowed pictures of himself in uniform. 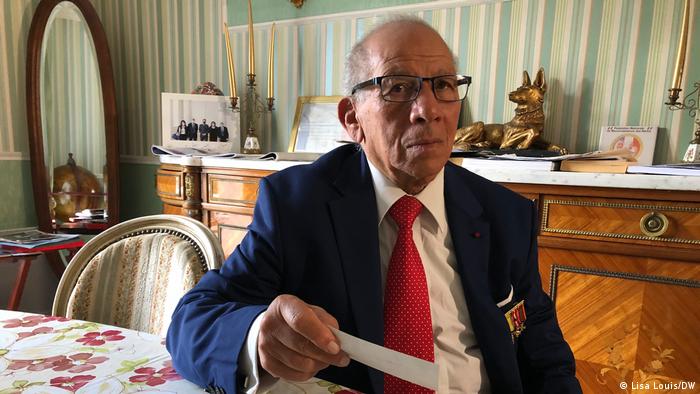 Serge Carel, now 84, shares his harrowing experience of being left behind in Algeria

Many ‘Harkis’ left behind — at the mercy of the nationalists

The war ended over seven years later, in 1962, when France exited its colony in North Africa — after more than 130 years of colonial rule. It also left behind most of its Algerian army’s auxiliaries like Carel. Only about 40,000 of them were brought to France, and another 40,000 made it across the Mediterranean Sea on their own account.

Up to 400,000 auxiliaries worked for France during the war, according to historians.

Most of them were left deeply traumatized by what happened next. A trauma that even a recent apology from Emmanuel Macron — he’s the first French president to say sorry to the Harkis — won’t heal.

Those who were taken to France were interned in camps with poor living and sanitary conditions. Many of them would later struggle to build a normal life.

In 2018, the country’s highest court of appeal condemned France for the first time in history to pay €15,000 in compensation to the son of a Harki who had grown up in such a camp, as compensation for the psychological after-effects of the “appalling conditions.”

Many of those left behind in Algeria were tortured and killed by the nationalists. 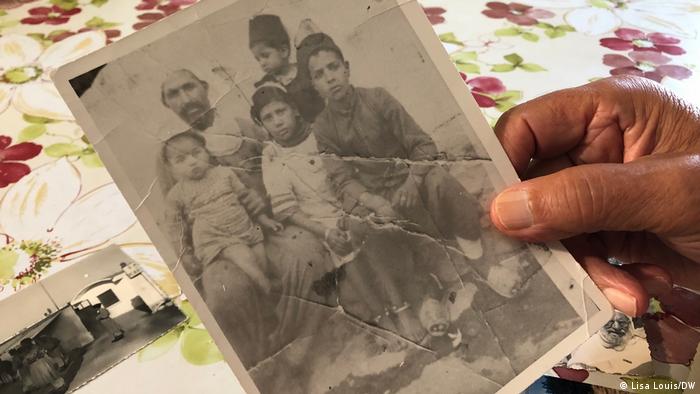 This undated photo shows Serge Carel and his family in Algeria

Carel was one of those who soon got caught by the FLN. “The French had taken away our weapons and abandoned us. It was a disgrace how France behaved. And the FLN wanted vengeance,” he explained.

He was brought to a shed in a village and tortured daily.

“But I had saved the lives of one of my guards’ parents during the war and so he gave me a chance to escape — just before they wanted to execute me,” Carel said.

One of his aunts living in Algiers hid him for a few months and then helped him flee to France. He arrived in Marseille and took the train to Paris. But once there, he didn’t find the open arms he was hoping for.

“An officer told me I had lost the French nationality the army had given me. And I replied: So, when France needed us Harkis, we were French. And now that we’re no longer needed, we’re no longer French?” Carel recalled.

For security reasons, he changed his formerly Arab name to a French one. 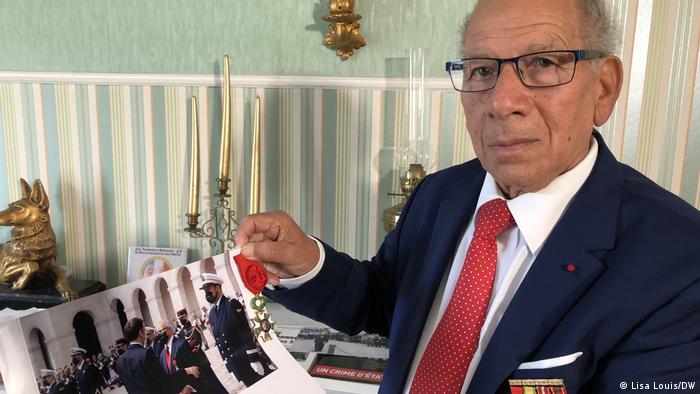 Carel completely ‘on his own’

During his first few months in France, he would often unload carriages at the Gare de Lyon in Paris, and sleep in the wagons at night. The money he earned was just about enough for food.

Later on, Carel did manage to build up a successful career — and became a manager at an international money transport company.

But those difficult beginnings still left a bitter taste in his mouth.

“It was so disappointing that France didn’t help me after all I had gone through — I was completely on my own,” he said. 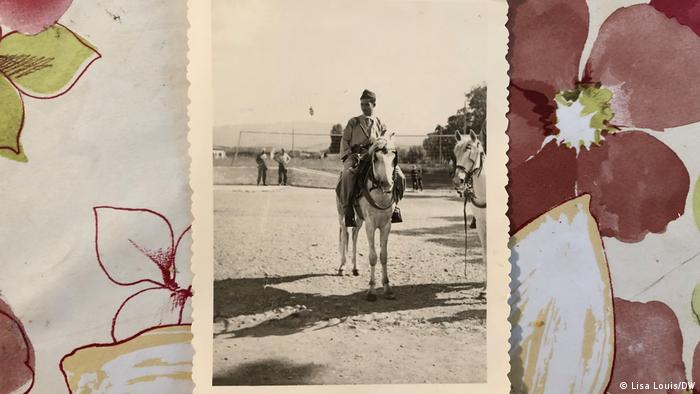 Serge Carel in uniform while serving as an auxiliary for the French Army, in Algeria

President Macron’s words at a recent ceremony at the Elysée were to soothe some of Carel’s and other Harkis’ pain.

“To the combatants we abandoned. To their families who were sent to camps or prison. Given our denial, I am asking you for forgiveness. We shall not forget,” Macron said.

The French leader then promised a law of “recognition and reparation.” The legislation is to reach Parliament in December and be rubber-stamped before February.

But details of the new rules are not yet known. 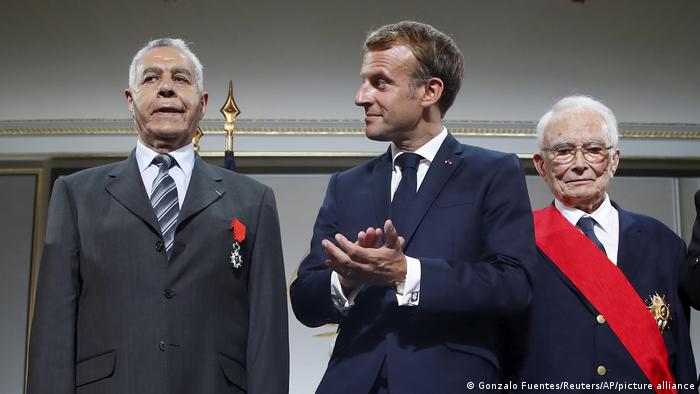 President Emmanuel Macron (center) honored Salah Abdelkrim (left), a former Harki who was wounded, with the legion of honor in September

‘The truth needs to be reestablished’

And Gilles Manceron, a Paris-based historian and specialist in colonial history, fears the legislation might fall short of expectations.

“We are talking about a whole community of people — not just the Harkis themselves, but also their children and grandchildren. They are all traumatized,” Manceron told DW.

“For them, reparation also means that the truth is reestablished and everybody learns what happened to their families — especially as French politicians have often said erroneous things about the Harkis,” he added.

Carel does welcome how Macron officially apologized for France’s wrongdoing.

“No other president before him said sorry; he opened his arms to us and we will of course accept that,” he said.

Carel himself was present at that recent ceremony — and at many others to honor the Harkis. His dresser is dotted with pictures of him and Macron and a number of national orders he has been decorated with by France. 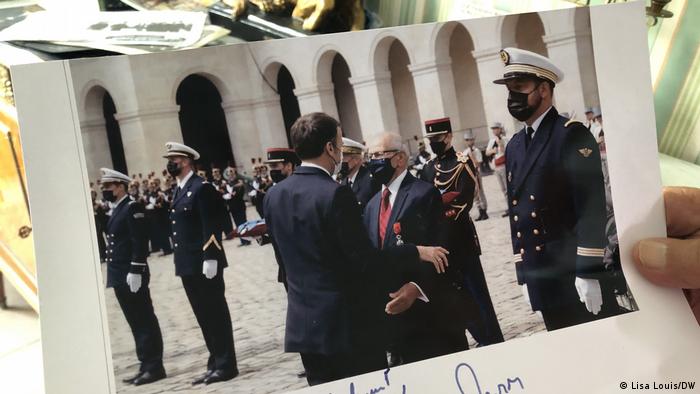 But Carel is now asking for more than just tributes.

“We need to have it in black and white that we are French in our own right. I still remember that they used to put a stamp saying ‘FM’ in our passports, which meant French Muslims — that still hurts!

“Why did they treat us like that? We are more French than any other French!” he uttered, with tears in his eyes.

He added that France should also make compensation payments and provide other benefits such as free health and elderly care for the Harkis.

For Carel, that’s the least France can do.

“It’s all France’s fault. France abandoned its children. And by abandoning them, it sentenced them to death,” he said.

Confronting France's colonial past: Harkis eye reparations have 1282 words, post on www.dw.com at January 15, 2021. This is cached page on Europe Breaking News. If you want remove this page, please contact us.