Some of the last images of Lucas Villa show him dancing at peaceful marches in the city of Pereira. In one video, the university student says into the camera : “They are killing us in Colombia.” Now he is fighting for his life in the ICU after taking eight bullets .

Authorities said they are still looking for the culprits. But many protesters already see Villa as a symbol for demonstrations that have been marred by police brutality and have left at least 24 people dead.

Protests all around Colombia against poverty and human rights abuses have entered their second week — even as riot police clamp down and the country goes through its third wave of the coronavirus.

“How bad must the situation be for us to march in the middle of a pandemic?” said Jhon Ramirez, who is protesting in Zipaquira, near the capital, Bogota. “The virus has taken a backseat because we can’t deal anymore with this government that won't stop killing us.”

The mass demonstrations that started on April 28 over an unpopular tax reform have since ballooned to cover a much longer list of grievances. Colombians already protested President Ivan Duque’s government in late 2019 because of extreme inequality, worsening violence in rural areas, lack of access to health care.

The COVID crisis exacerbated some of these issues and now more than 40% of the population lives in poverty.

“Fear of a crackdown is always there”

On Monday, the government rescinded the controversial tax plan that would have put a larger financial burden on a middle class dealing with a pandemic economy. But anger on the street has not subsided.

One reason the protests are still happening is how widespread the grievances are, says Sergio Guzman, director of the consultancy Colombia Risk Analysis.

“It goes beyond the usual people you would find at these protests; student organizations, labor unions, transport unions,” he said. “A much broader segment of society wants to show its discontent.”

Another factor still fueling the outrage is the police’s heavy-handed response in cities like Bogota or Cali. International rights groups and the UN, EU and US have all expressed concern.

The Colombian Ombudsman’s office for human rights said at least one police officer and 23 protesters have died in the protests. Police reportedly were responsible for 11 of the protesters’ deaths. 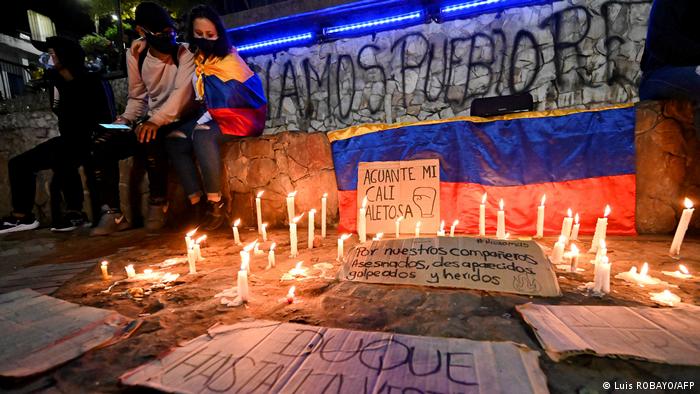 While Ramirez has only attended peaceful protests so far, accounts from friends and explicit images circulating on social media have kept him up at night. He says the fear of an impending riot police crackdown is always in the back of his mind.

“We don't feel protected by them,” he said. “They could turn on us.”

Duque has given little airtime to the issue of police brutality. Instead, he focuses on the “extreme vandalism and urban terrorism” of demonstrators who have blocked roadways, lit buses on fire and attacked officers.

Putting the onus only on protesters, however, is not sitting well with the public, according to Guzman,

“The government's downplaying of [police] violence without expressing any sadness or pain for the people who have died has created much more indignation,” he said. 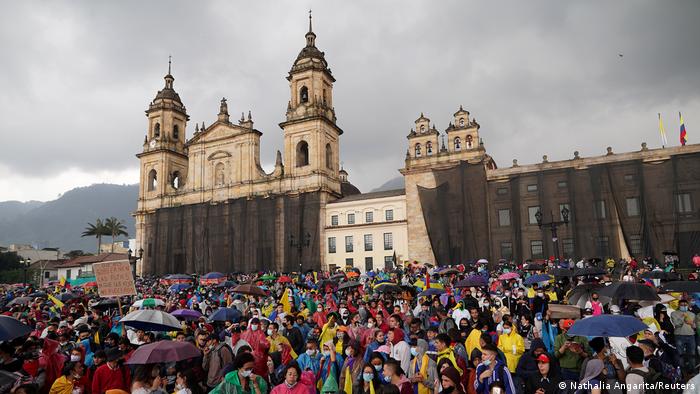 Bogota has been one of the protest hubs

Duque is trying to move forward by calling for dialogue among the government, the private sector and civil society. But his critics fear it will result in a repeat of fruitless conversations held in 2019.

To put an end to the crisis, Duque needs to address all of the protesters' complaints, including the charges of police misconduct, says Guzman, who added that otherwise, the president will prove that he is not listening.

“Particularly if his rhetoric continues to suggest that people protesting against his government are doing so illegitimately,” Guzman said.

Colombia: Why protesters keep marching amid a police crackdown have 838 words, post on www.dw.com at January 7, 2021. This is cached page on Europe Breaking News. If you want remove this page, please contact us.