At first, no one noticed the water lapping angrily at the riverbank.

Reena Bhalekar’s family slept soundly as the early morning rain drummed on the tarpaulin of their shelter. “The water was rising slowly,” the 26-year old remembers. “My sister wasn’t even aware that the water had come into her home.”

Then, from somewhere nearby, a piercing scream shattered the silence. Rushing outside, Reena discovered the river had risen dramatically overnight and now reached their slum in Chetru, a tiny village on the outskirts of Dharamshala in the Indian Himalayas . Settlements further down the hill were already a foot deep in water. With the road leading out of the settlement submerged, the family abandoned their belongings and scrambled up the densely forested hill to safety. 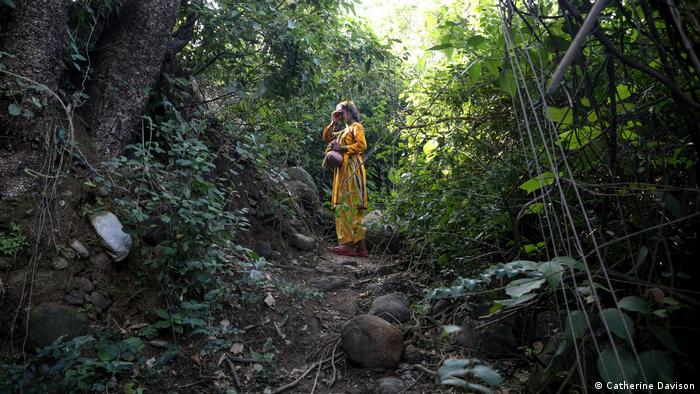 The flash flood in July wreaked havoc across the district, damaging properties and triggering a deadly landslide. It was one of 35 witnessed by the state of Himachal Pradesh in the first six weeks of India’s monsoon season, a landslide incident increase of 116% compared to last year.

Himalayan villages like Chetru are situated in a region known as the planet’s “third pole” due to its vast ice sheet, which holds the largest amount of frozen water outside of the polar caps. Scientists warn that that the area is likely to witness rapidly melting glaciers and increasingly erratic rainfall patterns over the coming century due to climate change.

However, activists say disasters like that in Chetru point to more than just climate change. They highlight how the impacts of the climate crisis are being compounded by unbridled development, driven by tourism and rapid urban growth. 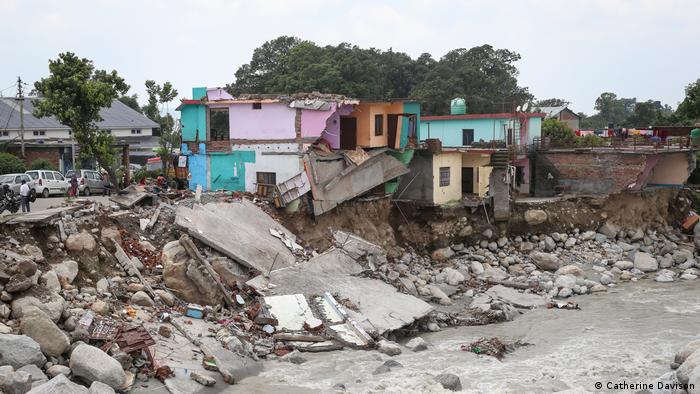 “In the popular discourse climate change is very easy to blame,” said Manshi Asher, an environmental activist and co-founder of local research collective Himdhara. This avoids addressing the issues of unplanned development, lack of regulation and rampant tourism, argues Asher.

A 2015 study prepared for the state’s own Disaster Management Cell cautioned against the risks of overdevelopment in Himachal Pradesh, finding the region at high risk of human-induced landslides as heavy construction and deforestation disturb the already fragile terrain.

Reena’s family and her neighbors experienced this first-hand. Not only did overdevelopment and the accompanying deforestation unsettle the local terrain, potentially intensifying the impact of the July floodwaters, it was also the reason they found themselves living there in the first place.

The families migrated decades ago from a neighboring state to find daily wage labor and settled in Charan Khad, a suburb of Dharamshala. In 2016, their slum was deemed a sanitation hazard and demolished, leaving around 290 families without shelter. 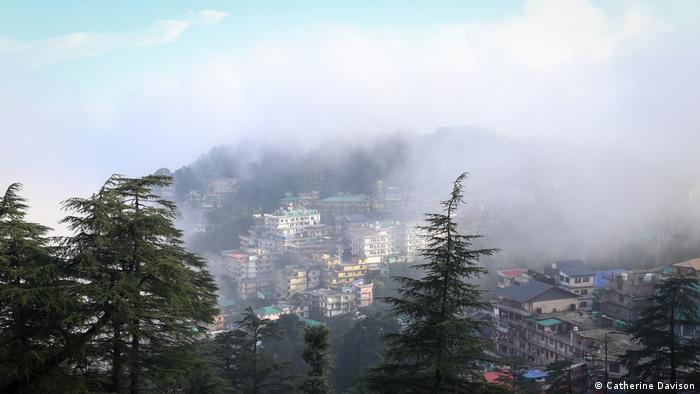 However, Asher believes that the land had become “prime property" and the community was displaced to make way for new construction as part of a central government urban development scheme known as the Smart City Mission , aimed at driving economic growth.

“There was suddenly this whole plan of developing botanical gardens, parking, all kinds of things in the city,” she says, adding there was no attempt to provide sanitation or legally recognize the slum, which would have entitled its residents to resettlement. Instead, the community was left to build flimsy tarpaulin structures beside a fast-flowing river — the only patch of land available to them.

India’s National Green Tribunal, which handles environmental issues, has strict laws on housing density and multi-story building construction, and in 2019 the Supreme Court imposed a complete ban on tree felling for development projects in forest areas of Himachal Pradesh. Despite this, illicit hill leveling and destruction of forest areas remain commonplace. 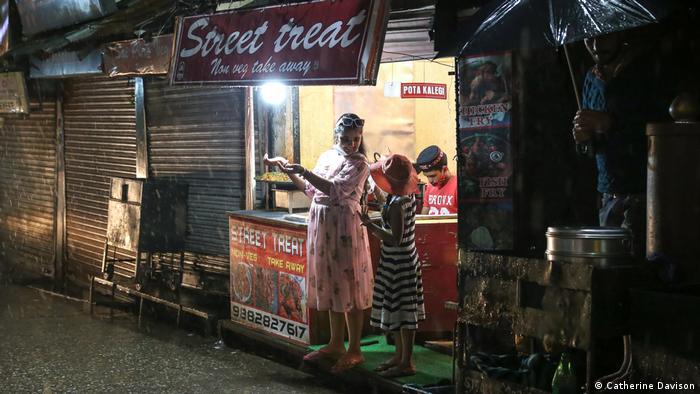 McLeod Ganj, home to the Dalai Lama and Tibetan government-in-exile, is popular with pilgrims and tourists

“The law is very good in India on paper — the problem is with the enforcement of it,” says environmental lawyer Deven Khanna, appointed by the High Court of Shimla, the state capital, in 2018 to investigate environmental violations in the region. The number of structures in Dharamshala which are built in violation of building laws is, he says, “mind boggling.”

Home to the Tibetan government-in-exile and a popular destination for pilgrims and foreign tourists, Dharamshala has experienced substantial urban growth in the last few decades, with the population more than doubling between 2011 and 2015.

In Bhagsu, a village popular with tourists in Upper Dharamshala, illegal building extensions constructed by hotel owners over the top of a stream obstructed the high flow of water during the flash flood this summer. With nowhere to go, the water burst out onto the main street, washing away cars and causing substantial damage to shops and houses. The illegal encroachments were demolished on the orders of state officials in the days following. 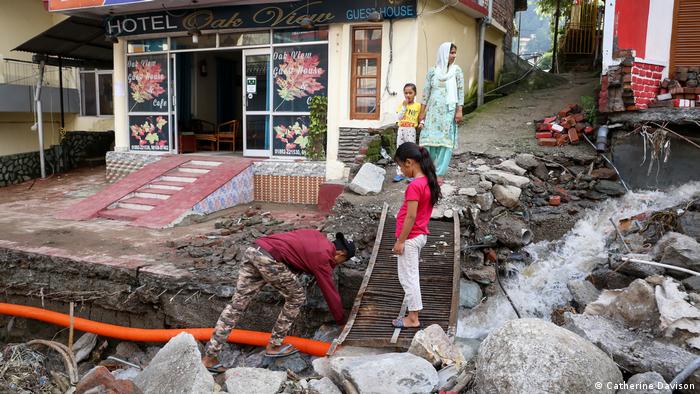 “The problem is starker in a place like Dharamshala, because it is a tourist place and there is a lot of opportunity to earn money from land, from buildings,” Khanna explains. “People are okay with the risks, because they are thinking about the money.”

Disillusioned with the inaction of local officials and the lack of resolution from the High Court case, Khanna now believes that long-term solutions lie with technology. He has advocated for the use of aerial drones and satellite mapping to monitor tree coverage and illegal felling. 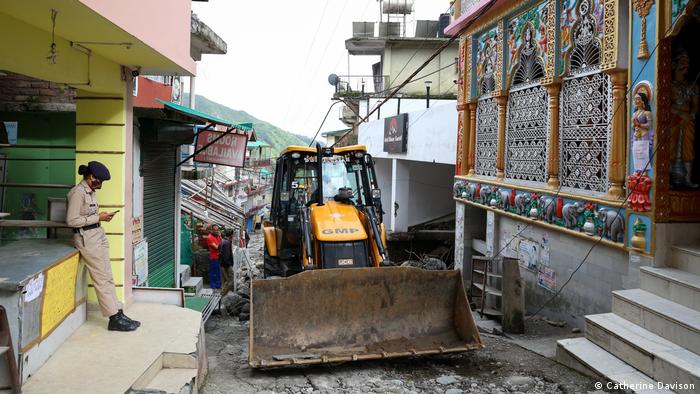 Floodwaters burst out from the stream running through Bhagsu village onto the road, causing widespread destruction

On his advice, the High Court ordered trials that involved tagging trees with GPS monitors and using drones to map areas around the state capital Shimla. Despite some initial success however, the schemes have been discontinued, due to what Khanna sees as a lack of political will and pressure from the public.

Before the floods washed away their homes, Reena’s community had been campaigning for years to be relocated to safer ground. They have now renewed their campaign for compensation and permanent resettlement. In the meantime, the government has provided temporary shelter nearby.

For Reena, the memories of the flood still weigh heavily. “I have nightmares where the water comes again at night and all of my children, the whole community, is swept away in the floods,” she says. “No-one escapes.”

Climate change and construction spell disaster for the Himalayas have 1308 words, post on www.dw.com at January 9, 2021. This is cached page on Europe Breaking News. If you want remove this page, please contact us.