It’s not been the greatest of weeks for Hertha Berlin, but this is a club never far away from a crisis. Jens Lehmann was released as a member of Hertha’s supervisory board this week after a racial gaffe, but Hertha finally seem to have things under control on the pitch at least.

Pal Dardai made nine changes from the team that got a good point at in-form Mainz on Monday – the most changes ever made by a Bundesliga team from one game to the next. Dardai was left with little choice though. Hertha host Arminia Bielefeld in a huge six-pointer on Saturday, followed by games against relegated Schalke and Cologne. It was a calculated gamble, but one that paid off.

“Something is growing together here now, everyone from the Hertha family is joining in,” said Dardai. “The players have known each other for 100 years from training. A lot of people might have shaken their heads, but we played very disciplined. It was clear that there would be a rotation. That it would turn out like this was also surprising for us.”

Dardai is often the man Hertha turn to in a crisis, of which Hertha have had a few . Once again his ability to steady the ship and get results in a short period of time — he rejoined as head coach in late January — has saved them. A former Hertha player, Dardai knows the club inside out and his team’s run of five unbeaten games and four points in a week after the team was forced into quarantine , is quite an achievement. 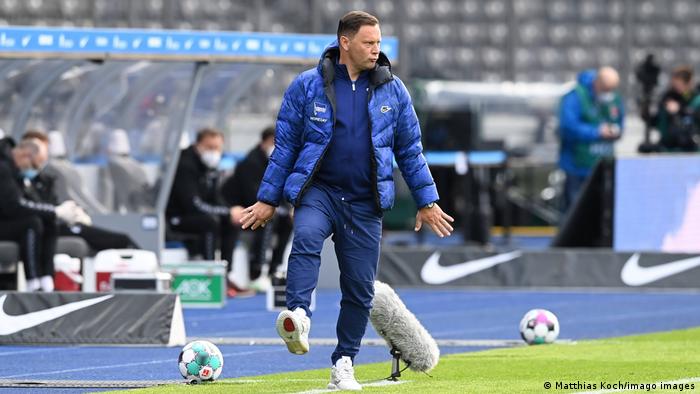 Pal Dardai made nine changes to his Hertha Berlin team — a Bundesliga record.

The visit of Freiburg to the Olympic Stadium was never going to be the easiest of assignments, but their bright start was dulled by Hertha’s early goal, an instinctive finish by striker Krzysztof Piatek. However, the Pole’s return of six goals from 29 league games this season does not represent a good return of Hertha’s €27million investment in January 2020. Infact, Hertha’s misspend of €100million on players in the past 18 months only to find themselves in a relegation fight speaks volumes about how this club has been mismanaged from the top.

After the opener, the momentum was with Hertha and when Peter Pekarik grabbed a second soon after, it left Freiburg with too much to do. Dardai, the one man at Hertha who seems to know what he’s doing, has made his team expansive on the ball and compact without it, and even teams as well-drilled as Freiburg have found that difficult to live with. Nemanja Radonjic put the icing on the cake late on with a long, mazy run and thumping finish. The 3-0 scoreline didn’t flatter Dardai’s men.

Arminia Bielefeld’s trip to this stadium on Sunday could go a long way towards deciding each of their fates. It’s a game Hertha will have to play without midfielder Matteo Guendouzi, who picked up a fifth yellow card of the season for kicking the ball away, but Dardai is showing that whatever the problem, he has the answer.

Bundesliga: Dardai’s gamble pays off as Hertha Berlin clamber closer to safety have 628 words, post on www.dw.com at January 6, 2021. This is cached page on Europe Breaking News. If you want remove this page, please contact us.