At one point during the conference, Angela Merkel stumbles over her words. The chancellor is asked where she will be on September 26 at 6 p.m., the evening of the German federal elections — and the end of her fourth and final term.

After a moment’s hesitation, she says: “I haven’t thought about it yet. But I will have some kind of connection to the party that is dear to me.” Merkel breaks off the sentence and starts again — “of which I am a member.”

There is laughter in the hall.

Merkel is a guest at the federal press conference (BPK), a union of German journalists in the capital, presumably for the last time as chancellor. For the 29th time in her 16 years as chancellor, she has traveled a few hundred meters from the chancellery to the BPK’s large press hall.

And her response to the question about the evening of the election shows how much she is there in her capacity as head of government — and not as a party politician. Merkel does not mention the name of her party, the center-right Christian Democrat Union (CDU), once in that answer.

Angela Merkel: ‘The more people who get vaccinated, the freer we will be’

In her opening statement, Merkel addresses two topics: Germany’s flood catastrophe and the pandemic. She speaks of the “terrible devastation” caused by the floods, mentioning the 170 people who have died so far. “There are still missing people,” she says. The chancellor has been to the crisis region twice in recent days. It will take “perseverance” to repair the damage, she said.

Merkel is in the room for the fourth time since the coronavirus pandemic reached Germany in 2020. And once again she gives a warning: The renewed increase in the number of infections is “worrying.” What is needed, she says, is renewed attention to protective measures.

“Preventing the overburdening of the health system remains the guiding principle of our actions,” she says. Vaccination certainly contributes to this. Everyone should promote vaccination to those around them, she urged. “The more who are vaccinated, the freer we will be again.”

She then takes questions for about 80 minutes, on all topics. The chancellor is the only a guest in this room — Berlin’s media are the hosts and a journalist moderates. Before the pandemic, the hall’s 230 seats were always packed when the chancellor came by. Now only 40 journalists were allowed, selected by a lot, but some ask questions submitted by others online. 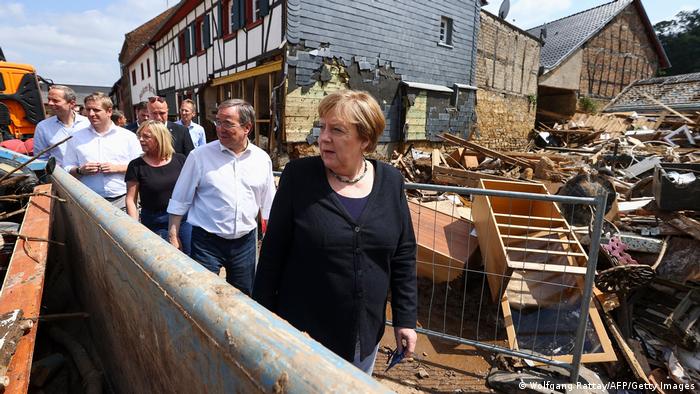 Many topics are touched upon, including Merkel’s state of mind. The further development of the Nord Stream 2 pipeline in the Baltic Sea, the situation in Afghanistan, the Cyprus conflict and the Pegasus wiretapping scandal are also discussed.

But climate protection and dealing with the climate crisis remains a constant topic throughout.

Merkel hardly mentions other German politicians by name. The only one she mentions — and even then it takes quite a long time to get there — is Armin Laschet, chair of the CDU and her would-be successor as chancellor. Various questions refer critically to Laschet’s climate policy.

Merkel rejects the accusation that Laschet, who is also premier of the state of North Rhine-Westphalia, which was badly hit by floods, is zigzagging on climate protection. But she also does not offer a strong defense.

She also mentions Luisa Neubauer, the face of the school strike climate movement “Fridays for Future” in Germany. Merkel refers to this movement three times and never critically, though it is often the subject of criticism for many of her fellow CDU politicians.

Merkel considers “the demands of the youth to be very important.” And she refers to the ruling of the Federal Constitutional Court at the end of April, which partially invalidated legal regulations on climate protection passed by the Bundestag and demanded improvements. The “scientific evidence” requires us to act “even more quickly,” she says.

“Some things are happening; other things need to happen faster ,” she adds.

That phrase is certainly not as catchy as “We can do it!” (“Wir schaffen das!”), the famous words that Merkel first uttered in this hall and at a press conference like this in 2015, during the refugee crisis. But she is clear.

‘I am a scientist’

It’s what the doctor of quantum chemistry has been saying since her first appearance in this hall in January 2006, her first summer press conference in July of the same year. At one point, asked about her youth in communist East Germany, she places her education first and foremost: “I am a scientist, a natural scientist.”

Sticking to science and facts seems to be a message she is keen to hammer home — even if she doesn’t want to give her successor any advice. She mentions the UN Climate Change Conference COP26 in Glasgow at the beginning of November, at which progress must be made. The new German government will have to deal with this after the Bundestag elections.

Merkel was also keen to stress the importance of cooperation in the society, of building political bridges that at the moment are missing. “I do have some concerns there,” she says. Compromises are “constituent parts of any democracy.” 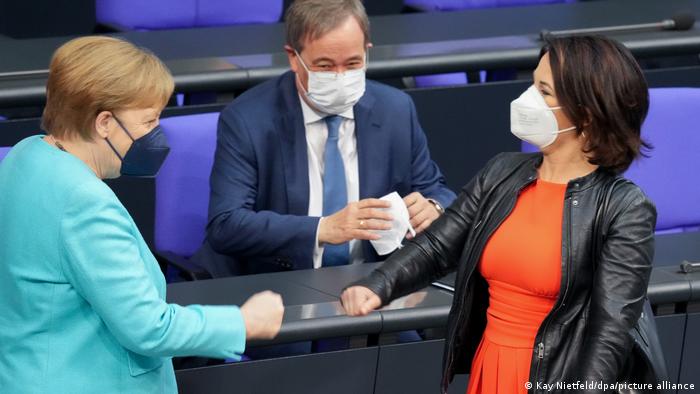 Merkel did not use gendered language to refer to her successor as chancellor; Annalena Baerbock is the Greens’ candidate for the job

On the same note, she also says it is important not to mix facts with emotions: “Facts are facts that need to be paid attention to.” That is classic Merkel — big on facts and details. At another point, the scientist talks about a flood height of 8.8 meters (29 feet), and then quickly corrects herself: “8.87 meters” (29.3 feet).

Merkel does not want to comment on her personal future after the election. The time after her tenure “will come,” she says. But until then, the challenges remain enormous. And she wants to “give a good handover to the next federal government.”

That sounds like sweeping the chancellor’s office clean, taking coats to the checkroom and handing over the keys. But such is Merkel’s sober view of politics.

The 93 minutes come to an end. Host Corrina Buschow extends her gratitude for Merkel’s 29 visits with appreciation, and points out that 30 would be a smoother number.

“I’ll also say thank you. It was a pleasure,” Merkel answers. And, in just over two months, Germans will elect the next parliament — and with it, the next chancellor.

This article was adapted from German.

Angela Merkel's last federal press conference: 'It was a pleasure' have 1386 words, post on www.dw.com at January 22, 2021. This is cached page on Europe Breaking News. If you want remove this page, please contact us.