Last Friday in Berlin’s Fennpfuhl district, Adegbayi B. was out with his one-year-old daughter when a woman suddenly spat at him and began shouting racist insults. Adegbayi B. has Nigerian roots and filmed the incident, uploaded the video and reported the incident to the police.

The woman was later arrested. In a series of interviews afterwards Adegabyi B. explained that in Germany racism has been a constant. He says he is the target of racial insults two to three times a month and his daughter has been traumatized since the incident last week.

It was not an isolated incident. Black people in Germany report that people often touch their hair without their permission, ask them for drugs and target them with sexist remarks. They also report that they are stopped by the police more often than white individuals. Finding an apartment is also more difficult.

Many Black people have had such experiences. Approximately 6,000 people officially recorded their experiences as part of an online survey. The survey was anonymous and voluntary and ran between July 20, 2020, to Sept. 6. The results are summarized in a 300-page report.

What it means to be Black and German

“It’s been a really long road and it’s been a struggle,” says racism researcher Daniel Gyamerah of the organization Each One Teach One. He is Black, and mentions “painful accounts” collected as part of the survey. He says the previous German government did not prioritize collecting such data despite “its human rights obligation” to do so.

He emphasizes that the problem is not new. “Anti-Black racism is not our problem. We didn’t think it up and didn’t invent it. The problem is structural.”

The survey is not representative, but it does reveal trends and describes the experiences of people who have been discriminated against in Germany. It was conducted as a joint project of Each One Teach One and Citizens for Europe, a civil society organization that promotes diversity and democracy. The project was made possible by funding of around €150,000 from the Anti-Discrimination Agency, which is part of the Federal Ministry of Family Affairs. “The results of the Afrocensus impressively demonstrate the manifestations and effects of discrimination and anti-Black racism in Germany,” says acting director of the Anti-Discrimination Agency Bernhard Franke. 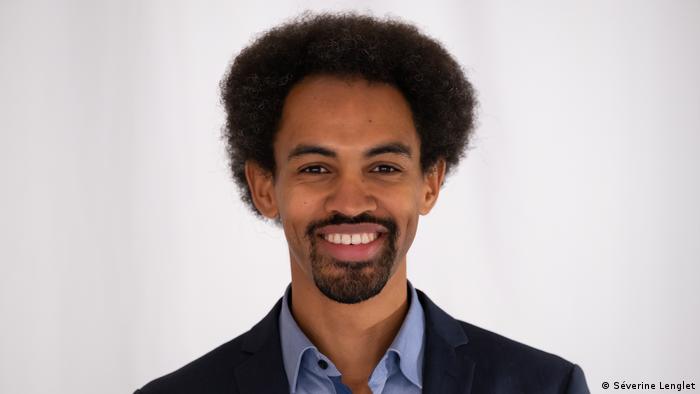 In an interview with DW, Gyamerah says he has been asked again and again “what the big deal is” and whether there even are Black Germans. He says that was part of the reason he undertook the project.

Over a million Black people live in Germany today. Many feel discriminated against by state institutions and in everyday life in Germany. That was the experience of over 42% of the respondents.

The “Afrocensus” is a novel concept in today’s Germany: As a result of the colonial and Nazi periods, statistics are not usually gathered based on race.

“There is always this fear that research will create these communities in the first place,” says Gyamerah. “But we are here. We are part of society and we won’t be hidden.”

Racism in the workplace

Experiences with discrimination and racism

Researchers found that anti-Black racism is perpetuated through three main mechanisms. Exoticization is arguably the most important factor, with 90% of respondents reporting having their hair touched without their permission. But the sexualization of Black people is also a common experience. Overall, nearly 80% say they have received sexualized comments on dating apps regarding their appearance or “origin.”

False narratives about criminality and predictive policing also plays a role. Around 56% of respondents say they have been asked whether they sell drugs. An equal number have been stopped by police for no apparent reason. Two-thirds of “Afrocensus” respondents (67.6%) believe they are judged less favorably than their classmates or fellow students at school or university because of racial stereotypes.

When Black and African individuals and people from the African diaspora try to confront discrimination, they often have negative experiences. More than 90% say people do not believe them when they talk about their experiences with racism. 75% of those affected said they do not report cases of racism. When they do they are often told not to make a fuss.

According to the Potsdam-based association Victims’ Perspective at least three to four people in Germany are victims of right-wing violence every day. Around two thirds of all attacks are racially motivated.

Touré: ‘We really have to tackle this problem’

A beginning, not an end

Franke is satisfied with the “Afrocensus” and praised the work done to make it possible. In the future, the government wants to appoint police officers to deal with cases of discrimination.

For those behind the “Afrocensus,” the study is only the beginning. They want to continue their research and publish the results in English and French. They are also calling for more community and counseling centers, as well as government action plans for combating anti-Black racism. The racist incident in Fennpfuhl  — and many others — demonstrate the necessity of such measures.

While you’re here: Every Tuesday, DW editors round up what is happening in German politics and society. You can sign up here for the weekly email newsletter Berlin Briefing, to stay on top of developments as Germany enters the post-Merkel era.

'Afrocensus' results: What is it like to be Black in Germany? have 1118 words, post on www.dw.com at January 30, 2021. This is cached page on Europe Breaking News. If you want remove this page, please contact us.