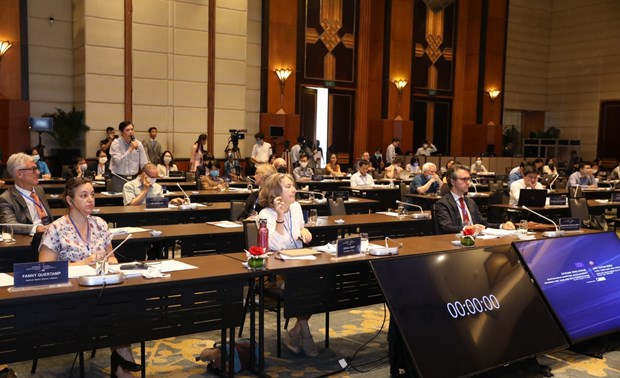 Participants in the dialogue in Hanoi on August 19 (Photo: VNA)

Hanoi (VNA) – A dialogue with the theme "Sustainable Maritime Development: Sharing Vietnam and EU's Perspectives" took place in Hanoi on August 19 with over 150 in attendance.

Co-organised by the Diplomatic Academy of Vietnam, the EU Delegation to Vietnam , and the Konrad Adenauer Stiftung political foundation from Germany, the dialogue is an opportunity for an exchange of opinions on sustainable maritime growth and boosting cooperation between Vietnam and the EU in this regard.

It consisted of four sessions on the sustainable development policies of both sides, marine environmental management, a sustainable blue economy, and new trends in maritime-related issues and the future of Vietnam-EU maritime cooperation .

Speaking at the opening session, Dinh Toan Thang, head of the Foreign Ministry's Department of European Affairs, said the dialogue is a meaningful activity and marks the 30th anniversary of diplomatic relations.

He affirmed that the Vietnamese Government values international maritime cooperation, particularly with experienced partners like the EU.

As part of the EU-Vietnam Framework Agreement on Partnership and Cooperation (PCA), the two have committed to increasing the protection of the maritime and coastal environment as well as reinforcing the effective management of maritime resources towards sustainable development.

Echoing that view, Ambassador Giorgio Aliberti, head of the EU Delegation to Vietnam, said EU-Vietnam ties have never been as close as they are now, particularly after the two signed a free trade agreement.

He noted, however, that engagement in blue growth remains limited.

He hopes the dialogue will contribute to further clarifying the EU's maritime policies./.

Dialogue looks at Vietnam - EU maritime economic cooperation have 414 words, post on en.vietnamplus.vn at August 19, 2020. This is cached page on Europe Breaking News. If you want remove this page, please contact us.