Washington’s North Korea point man Stephen Biegun, who is visiting South Korea, on Wednesday said his government did not request a meeting with North Korean officials this time.

He was responding to shrill rejections from the North earlier of dialogue that had apparently never been sought.

Biegun stressed that the purpose of his visit was to “meet with our close friends and allies,” and added, “When [North Korean leader Kim Jong-un] appoints a counterpart to me who is prepared and empowered to negotiate on these issues, they will find us ready at that very moment. Dialogue can lead to action, but action is impossible without dialogue.”

North Korean Vice Foreign Minister Choe Son-hui said Saturday that the regime feels “no need to sit face to face” with the U.S. On Tuesday morning, the day of Biegun’s arrival in South Korea, another North Korean official rejected dialogue in even more strident terms.

But after back-to-back-meetings with Foreign Minister Kang Kyung-wha and South Korean nuclear envoy Lee Do-hoon Biegun told reporters he had never sought any. “I also want to be very clear on one point. I do not take my direction from Vice Minister Choe Son-hui, nor from Ambassador John Bolton,” who in a mildly explosive recent book also rejected dialogue with North Korea.

“Both are locked in an old way of thinking, focused on only the negatives and what is impossible, rather than thinking creatively about what is possible,” he said. “I take my guidance from the conclusions of the several meetings that President [Donald] Trump and [Kim] have had over the last two years. Their vision is what guides our team: a focus on creating a more durable peace on the Korean Peninsula, transformed relations, the elimination of nuclear weapons on the Korean Peninsula and a brighter future for the Korean people.”

Earlier on Wednesday, Biegun also met with Vice Foreign Minister Cho Sei-young to discuss the sticky issue of cost-sharing to maintain American troops in South Korea. The two reached no breakthrough, but Biegun told reporters afterwards, “I want to assure all who have any questions about this: U.S. commitment is ironclad for the defense of the Korean Peninsula.

“Our United States military, our United States government are fully in partnership of the alliance of Korea, and it’s a great pleasure to reaffirm today in my meetings with Vice Minster Cho,” he added.

He also expressed support for inter-Korean dialogue, which he said “plays an important component in creating a more stable environment on the Korean Peninsula.”

There had been reports earlier that Washington is uneasy with President Moon Jae-in's attempts to engage North Korea with repeated offers of cooperation and proposals to mediate in dialogue with the U.S.

Trump abruptly said he is open to another summit with Kim. “I would do it if I thought it was going to be helpful,” he said in an interview with Voice of America Tuesday. “Probably. I have a very good relationship with [Kim], [so it] probably would be,” he added. 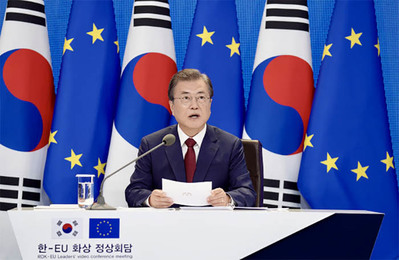 Moon to Push for Trump-Kim Summit Before U.S. Election

U.S. to Leave Door Open to Diplomacy with N.Korea

U.S. Ready to Talk If N.Korea Appoints 'Proper Counterpart' have 780 words, post on english.chosun.com at July 9, 2020. This is cached page on Europe Breaking News. If you want remove this page, please contact us.