Campaigner Marie Lyon broke down in tears as she read the report. “At last!” she exclaimed.

After four decades of campaigning, she has achieved something extraordinary – recognition, finally, that she and hundreds of other families have been wronged.

An independent review has found that children suffered “avoidable harm” from failure to regulate a drug used for hormone pregnancy tests called Primodos .

The review team called the affair “a scandal” and the Health Secretary Matt Hancock agreed telling Sky News: “I want to issue on behalf of the NHS and the whole healthcare system a full apology to those who’ve suffered and their families, for their frustration, for the time it’s taken to get their voices heard.”

It is the moment parents have campaigned for since the late 1970s when they first realised that severe congenital malformations of their newborn babies and in some cases miscarriages and infant deaths, may have been caused by Primodos, a hormone pregnancy test given to them by their GPs.

Today, the Independent Medicines and Medical Devices Safety Review, led by Baroness Cumberlege, says both the state and manufacturer have “an ethical responsibility” to fund a financial scheme for “those harmed” to help them with the costs of care.

Mrs Lyon, chair of the Association for Children Damaged by Hormone Pregnancy Tests, was speechless as she absorbed the document which confirmed that after all these years, she had been right.

Collecting herself, she said: “This has been what has been missing for so long. It’s the fact that it has been acknowledged, at last.

“They’ve actually looked at the documentation honestly and openly and that is the biggest result for our families – they will be overjoyed.”

Children of parents who used Primodos were born with problems ranging from heart defects and limb reductions to spinal malformations and brain damage in what has been described as the “forgotten thalidomide”.

The report also calls for support for affected children of mothers who used the epilepsy drug Valproate and women who suffered complications after vaginal mesh surgery. 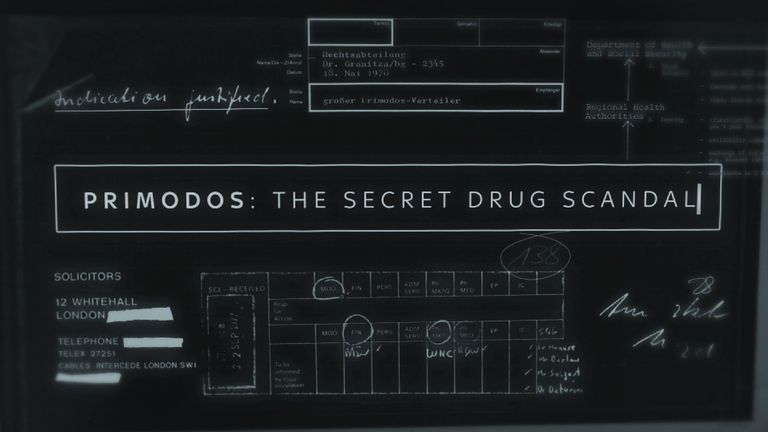 The review team says Primodos should have been removed from the market in 1967 when concerns were first raised about the drug.

It continued to be given to women by doctors until 1978, by which time more than a million women used the drug, many who would have been pregnant.

In a letter to the health secretary, Baroness Cumberlege writes: “I have no doubt that much anguish, suffering and many ruined lives could have been avoided.

“We have found that the healthcare system – in which I include the NHS, private providers, the regulators and professional bodies, pharmaceutical and device manufacturers, and policy makers – is disjointed, siloed, unresponsive and defensive.”

A Sky News investigation in 2017 into Primodos helped prompt the then prime minister Theresa May into calling for the independent review.

Sky News submitted written and verbal evidence to the review team, including revelations from our documentary “Primodos: The Secret Drug Scandal” which showed that in the 1970s UK scientists had found women who used Primodos had a relative 5:1 increased risk of having a malformed baby.

What is more, evidence uncovered in archives in Berlin showed a UK regulator destroyed the materials on which this study was based “to prevent individual claims (against the German manufacturer Schering) being based on his material”.

Today’s report titled “First Do No Harm” suggests the government should now create a patient safety commissioner as an advocate who holds the system to account, monitors trends, and demands action.

It also calls for a redress agency for those damaged by medicines and medical devices.

Baroness Cumberlege said: “I have conducted many reviews and inquiries over the years, but I have never encountered anything like this; the intensity of suffering experienced by so many families, and the fact that they have endured it for decades.

“Much of this suffering was entirely avoidable, caused and compounded by failings in the health system itself.”

Asked by Sky News whether the manufacturer should apologise, the Baroness replied: “I think they should not only apologise; they should recognise what has happened and give ex-gratia payments to these people who have suffered.”

But this won’t happen willingly. Primodos was manufactured by German company Schering which is now owned by pharmaceutical giant Bayer.

In a statement Bayer said: “Bayer sympathises with people who struggle day to day as a result of physical disabilities. The totality of the available scientific evidence, however, does not support the existence of a causal relationship between the use of Primodos and adverse outcomes in pregnancy.

“We understand that the Cumberlege Report acknowledges that this is also the conclusion of detailed reviews by the UK and EU regulatory authorities. Bayer does not, therefore, believe that any form of ex-gratia payment scheme is appropriate.”

In 2017 a report overseen by the Medical and Healthcare products Regulatory Authority (MHRA) said the available scientific evidence “does not support a causal association” between the use of Primodos and congenital anomalies.

On the day it was published Sky News reported that significant changes were made from an earlier draft report, which was less conclusive about a lack of association.

Today’s review noted that in the minutes of their meetings, the 2017 Expert Working Group had concluded that “because the evidence was limited and many factors remained unclear, such an effect could not be definitively excluded”.

Having looked at the evidence, the Cumberlege review concluded: “In our view, the draft and final versions potentially create different impressions in the mind of the reader, and we understand why the changes to a more definitive conclusion in the final report could have been distressing to campaigners.”

Bayer has always denied that the drug caused malformation and told Sky News they are waiting to see the full report before commenting further.

Many of the documents, uncovered by Sky News in Berlin, have been withheld from publication in the final Cumberlege report “for legal reasons asserted by Bayer”.

The report says: “This has meant that the review has been limited in the extent in which it could set out the text or contents of these documents in its report, although it has read them and relied on them in coming to its findings.”

However, these documents are still available to see in the Sky News documentary.

Health Secretary Matt Hancock said: “I’ve seen the pain and suffering all three of these problems have caused and I am very glad we’ve got this report, with very significant recommendations.

“This report is a wake-up call to the system, to respond to patients’ concerns, and take very seriously concerns from people who are suffering.

Primodos scandal: Relief for campaigners as review demands compensation for victims of hormone pregnancy test have 1339 words, post on news.sky.com at July 8, 2020. This is cached page on Europe Breaking News. If you want remove this page, please contact us.