‘I look back on the Kargil war and wonder what the enemy hoped to achieve.’ 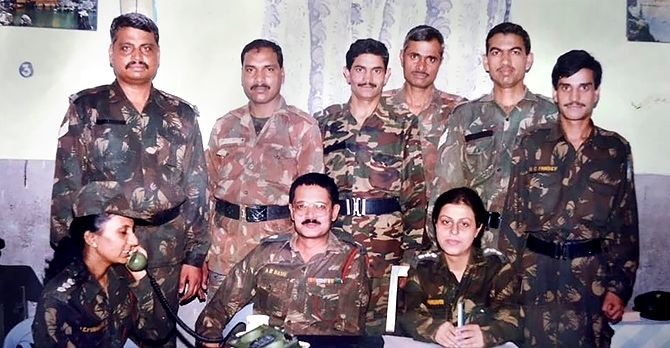 IMAGE: Dr Arup Basu, sitting, second from left, and the medical staff at the military hospital in Kargil during the 1999 War.

Dr Arup Basu was a young surgeon at the small military hospital in Kargil when the war broke out.

He spent two months as the only surgeon in the small medical team that battled night and day to save lives during the war.

He had just completed his MS degree from the Armed Forces Medical College in Pune when fate brought him to the frontlines.

“My exposure to surgery came amid fire, guns and bullets,” he says over the phone from Jamshedpur, the hometown he returned to after taking premature retirement from the Indian Army.

“Unless you capture territory, plant your flag, the war is never won — and that was done by the infantry men. I would give them most credit for winning us the war.”

The doctor received the Yudh Seva Medal for his duties during the war. His son is now pursuing medicine at the Armed Forces Medical College.

The gastro-surgeon shares his memories of those two months durin the Kargil War with Rediff.com ‘s Archana Masih .

“In February 1999, I was posted to Jammu and Kashmir. In May I was moved to the field hospital in Kargil.

It all happened as a matter of chance because the doctor who was posted in Kargil had gone for two months leave to appear for an exam. I went there to relieve him of his surgical duties.

This was the only hospital in that area. The other major hospital was at Leh.

A small brigade was posted at Kargil and since there were very few soldiers, the workload was less. I was told that I would probably have two, three surgical cases per day and the rest of the time I could relax and play badminton!

Little did I know that war was at hand, but at that time we were not sure what exactly was happening in Kargil. There were very hazy reports about some infiltration. 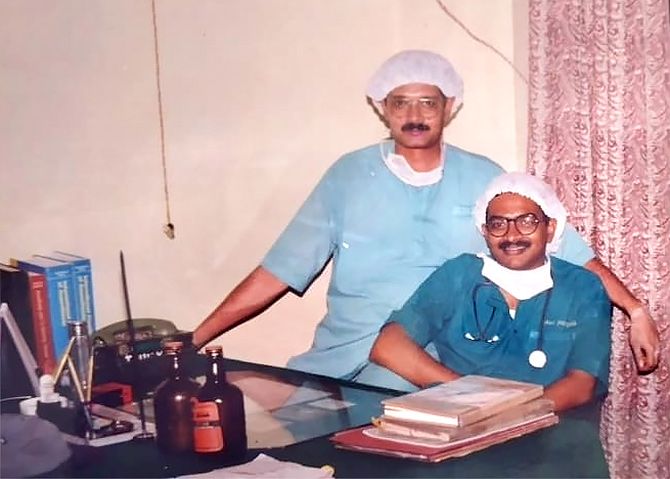 ‘My exposure to surgery came amid fire, guns and bullets’

The war lasted for about 56 days. You may call it destiny that it started just as I reached Kargil and ended when I came back after spending 64 days.

I was young and a novice surgeon who was literally thrown into the battlefield. You can say, I was inculcated in the subject of surgery by firepower.

My real exposure to surgical cases came amid fire, guns and bullets.

This small Kargil hospital had 15 to 20 beds. When the war began we had to deal with a lot of injured soldiers with limited resources.

There was one surgeon, one anaesthetist, a handful of doctors and one Quartermaster.

In the surgical team, we had about three or four operating room assistants. The housekeeping staff would clean up waste of the operating theatre.

Myself and the anaesthetist used to work through the night without any rest.

In the armed forces there is a chain of evacuation. It is rare that a doctor goes in the thick of battle.

He stays some distance away in the first aid post called the regimental aid post. Sometimes, a medical officer may also go into battle, but a surgeon doesn’t.

The doctor would stabilise them, dress the wounds, administer tetanus or antibiotics and then send them to us at the field hospital.

The patients would come in batches of 10 to 15, generally in the evenings. We would do a preliminary examination to prioritise them into high risk, medium risk and low risk, or triage.

We would take X-rays to find out where the injury was — whether a bullet was inside the abdomen, chest, liver or if there were fractures and take them for surgery as quickly as possible.

The surgeries would start at about 8.30 pm-9.00 pm and continue throughout the night.

The next day we would evacuate 10 to 12 patients because if we didn’t, there would be no beds for the injured on the subsequent day.

‘Splinters are more lethal than bullets’

Seventy per cent of the injuries were caused by splinters or shrapnel. These are fragments of bombs, grenades and mortars. They explode into thousands of fragments, each one is very sharp, deadly and has a very high velocity.

These are more lethal than bullets — one bullet would kill one person whereas splinters would injure 7 to 8 soldiers.

Of course, there were many bullet injuries and some injuries caused by landmines which occurred at the end of the war.

The worst injury that I treated was where a 1-centimeter splinter had entered the abdomen of a young soldier. It had torn his stomach, injured his liver, pancreas. He had lost four litres of blood.

We tried to salvage him for six to eight hours, but sadly could not save him.

Another soldier had come with a hole in his skull. He was hit by a splinter and part of his skull had shattered. He had suffered brain damage, but surprisingly he was absolutely conscious and talking. ‘I operated upon 300 soldiers, and lost one’

If soldiers came to us as ‘brought dead’ then the medical officer would certify them.

I had certified the mortal remains of martyr Squadron Leader Ajay Ahuja who was killed by the Pakistanis.

All the remaining survived.

Two years after the war, I met an officer whom I had operated upon in Kargil. We were both at the investiture ceremony to receive our Yudh Seva Medals.

I had repaired his abdomen and intestines after a splinter injury. He was in our hospital for a couple of days before being sent to the hospital in Leh.

He obviously didn’t remember my face or my name, but his face looked very familiar and I asked him if he was in the war.

He said yes and said that a doctor in Kargil had operated upon him. I told him that was me. 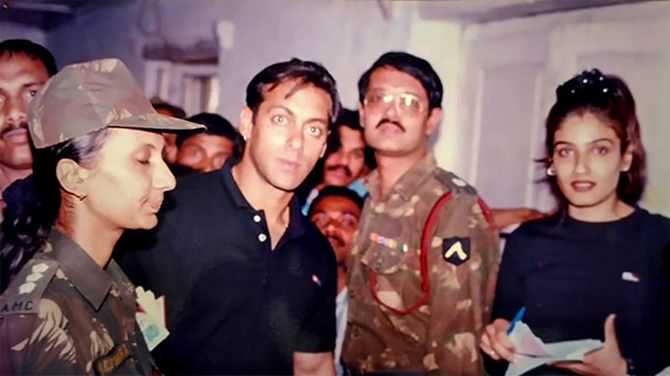 ‘And then the war turned. Our men captured peak after peak’

I had bought a notebook from the market and would write down stories the soldiers used to tell me about the war. How they fought and survived for days. At times they swallowed chunks of ice to quench their thirst and hunger.

The Pakistanis were on top of the mountain ridges and had the upper hand. Our soldiers had to climb up mountain slopes at an angle of 60 or 50 degrees. The area was absolutely barren with no trees or grass for cover.

In the initial days, the morale was low because our men were being spotted by Pakistanis and getting shot as they climbed up the slopes.

The initial 20 to 25 days were very gloomy and despondent. Then the Indian Air Force was deployed to bombard some positions and a little clearance was achieved.

In June the mutilated bodies of Captain Saurabh Kalia and his patrol were returned to us.

On hearing about the extreme injuries inflicted on them, the same soldier who appeared extremely despondent in the field hospital was suddenly transformed into a burning dynamite.

They used to tell me that you have to make us recover fast because we want to get back to the battlefield and avenge their deaths.

‘We will get to each and every one of them,’ they would say.

And then the war turned. The soldiers started capturing peak after peak — Tololing , Peak 4875 , Tiger Hill and Batalik ridges .

‘Unless you capture territory and plant your flag, the war is never won’

A lot has been written and discussed about the effort that went into winning the war. The brave soldiers, the bombing by the air force, the firing from the Bofors guns, the diplomatic pressure, etc. I being a soldier on the ground, I know that a war is never won unless the area is captured back on ground.

Unless you capture territory, plant your flag, the war is never won — and that was done by the infantry men.

It is the sheer steely willpower of the infantry that could recapture those ridges. The infantry won the Kargil war, I would give them most credit for winning us the war. 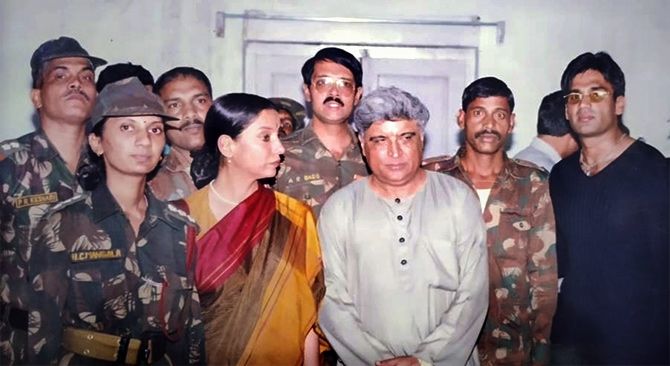 I could draw parallels between the initial days of the Kargil war and COVID-19 .

We were initially taken by surprise in the Kargil War.

There was no uniform policy being transmitted down to the ground level, the military response got streamlined subsequently.

In the military, things happen very quickly. But in the civil world it takes time. Similarly, in the first month-and-a half our response to Covid was not streamlined.

On my part, I walked up to the civil surgeon’s office and enrolled my services. I said if there are any Covid positive patients who need surgery, I am willing to render my services at no cost. They have not required my services as yet.

I took premature retirement from the army after serving in several military hospitals. I also spent 10 months on deputation as part of India’s medical assistance to Afghanistan. I served in the Indian hospital in Kabul and in several camps in different places in the country.

I still look back on those days of the Kargil war and wonder what the enemy hoped to achieve.

We are not an offensive country. Pakistan had intruded into our land and we defended ourselves with all our might. We drove them away by the courage of our soldiers.

'I operated upon 300 soldiers, and lost one' have 1835 words, post on www.rediff.com at July 22, 2020. This is cached page on Europe Breaking News. If you want remove this page, please contact us.