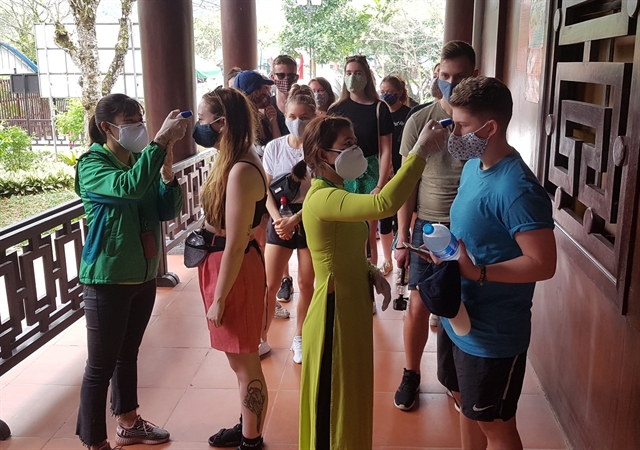 Staff at Tràng An ecotourism complex in the northern province of Ninh Bình check the temperatures of all tourists to the site and asked them to wear face masks. — VNA/VNS Photo Đức Phương

HÀ NỘI — The Ministry of Health has confirmed that a 29-year old Vietnamese woman tested positive for COVID-19, raising the total number of infection cases in Việt Nam to 35 on Wednesday.

At around 6-7pm on March 4, she had direct contact with two British people at a supermarket, who later tested positive for COVID-19, according to the health ministry.

The two British nationals arrived in Việt Nam from the UK on March 2 and they are among 10 British passengers who tested positive for the virus.

Early Wednesday morning, laboratory results from the Pasteur Institute of Nha Trang and the Đà Nẵng Centre for Disease Control and prevention were revealed, confirming the 35th patient tested positive for the SARS-CoV-2 virus.

Currently, the infected patients are being treated in isolation at the Đà Nẵng Hospital.

As of 7am Wedensday, more than 118,493 COVID-19 patients had been reported in 104 countries and territories around the world. China had 80,756 patients in all of its 31 provinces and cities. More than 4,261 fatalities had been reported worldwide, with 3,136 in China, according to the Ministry of Health — VNS

Việt Nam confirms 35th case of COVID-19 have 344 words, post on vietnamnews.vn at March 11, 2020. This is cached page on Europe Breaking News. If you want remove this page, please contact us.