On October 10, thousands of North Korean soldiers will goose step through Pyongyang, and columns of tanks and missiles will roll through the capital as well — past the VIP tribune at Kim Il Sung Square in the heart of the city, where North Korean dictator Kim Jong Un will be seated, as well as past masses of frenetically cheering compatriots. The Democratic People’s Republic of Korea (DPRK) will celebrate an important milestone on that date: the 75th anniversary of the founding of the country’s powerful Workers’ Party of Korea (WPK) by Kim Jong Un’s grandfather Kim Il Sung — the father of communist North Korea. From the North Korean point of view, such an auspicious date is the perfect occasion to demonstrate military strength to the world, perhaps to even show off new weapons.

The outside world’s best indication that something big is in the works comes from bird’s-eye satellite images. Captured this spring and summer, the images document massive construction projects, both in the city center as well as about 10 kilometers (6.2 miles) to the east, at the Mirim Parade Training Ground, which is often used as a practice and staging area for military parades. A replica of Kim Il Sung Square has even been created at the Mirim facility in order to train for parades like the one on October 10 under the most realistic conditions possible.

“The Mirim Parade Training Ground, with its replica of Kim Il Sung Square, has been around for a long time,” explains Jenny Town, deputy director of 38 North, a US think tank focused on North Korea. “All of the North’s large military parades require practice to ensure smooth operations, tight execution of timing and formations, and strict protocols in advance of the big event.”

Satellite images showing hundreds of vehicles as well as troop formations at the site suggest training for the October 10 parade began in September.

As seen from space: Building at Mirim Parade Training Ground

Town and her colleagues at 38 North noticed increased activity at the Mirim site months ago. They weren’t alone. The developments are also closely observed by others, like the US-based Center for Strategic and International Studies (CSIS) and Vienna’s Open Nuclear Network.

Images captured this spring showed that a large number of new buildings had popped up on the site within a matter of weeks. Town says that until then the site had consisted of nothing more than open fields. Observers say the buildings are likely housing for soldiers as well as garages and storage facilities for trucks, tanks and other military vehicles.

That is new, says Jaewoo Shin, who analyzed the satellite images for Open Nuclear Network: “In the past, the country has relied on more temporary shelters and tents to store its larger military vehicles, allowing outside observers to get some sense of the scale of a planned parade in comparison to previous ones.”

That prior approach had serious downsides for North Korea, namely, it made it easier to ascertain how many vehicles or military equipment were on site using satellite imagery.

Observers say the newly erected facilities are large enough to store mobile missile launchers. They say the sites would also be big enough to store the Hwasong-15 — a 22-meter-long (72-foot-long) intercontinental ballistic missile (ICBM) that North Korea successfully launched in November 2017. With a range between 8,500 and 13,000 kilometers, experts say it could potentially reach the US mainland.

Moreover, experts analyzing satellite images say they recognized an object at the site that could well be a missile on a transport vehicle. 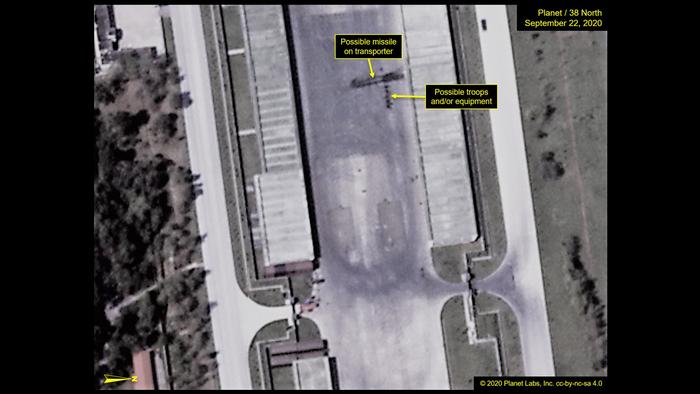 Satellite image from Planet Labs from September 22: The elongated object may be a missile on a transporter

Jaewoo Shin suggests North Korea may be planning a surprise for its October 10 parade: “We are still waiting to see the country’s self-announced ‘new strategic weapon,'” he says. Since the country has struggled with the effects of the coronavirus pandemic and been battered by a number of typhoons this summer, Shin says, “The country may see the need for intensified internal and external power projection.”

A tradition of military parades

The military has always been at the heart of the Kims’ hermit kingdom, and military parades have played an important role in North Korea since the country’s founding in 1948. The DPRK has used key anniversaries — be it National Liberation Day, the anniversary of the founding of the military or the birthday of founding father Kim Il Sung — to showcase it.

The US Central Intelligence Agency (CIA) estimates the DPRK’s army currently has some 1.2 million active duty soldiers. North Korea itself has an estimated population of around 25 million.

Parades are a clever way to showcase the country’s military strength despite comprehensive UN Security Council (UNSC) sanctions on Pyongyang, says Jung H. Pak. A former CIA analyst, Pak is now a senior fellow at the Brookings Institution, a renowned Washington DC think tank. This April, she published a noteworthy book of the rise and political ambitions of the DPRK’s current leader, titled, Becoming Kim Jong Un. Pak tells DW: “Parades are useful, because they show capabilities without testing — which could garner some sort of punishment. There is very little we can do in response to parades and this display of new capabilities.” 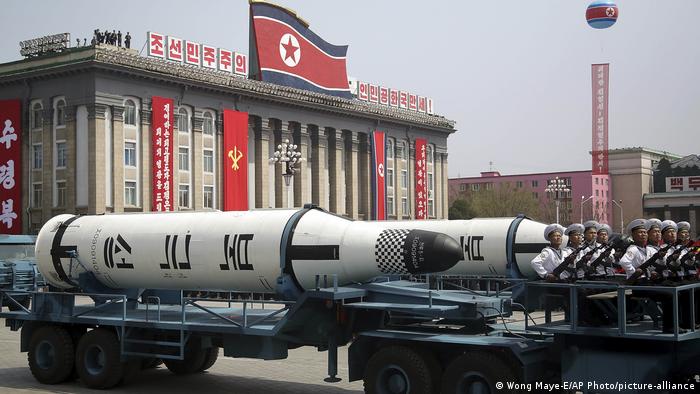 For instance, in April 2017, Kim Jong Un used the occasion of his grandfather Kim Il Sung’s 105th birthday to showcase three new intermediate-range missiles — among them, the Pugkuksong-1, which the DRPK claims to have used in its first successful submarine-based missile launch. North Korea has a number of short, intermediate and long-range missiles in its arsenal, several of which could be fitted with nuclear warheads.

Kim puts his chips on nukes

But will the October 10 parade feature another world premiere? Will the world finally see the “new strategic weapon” Kim promised in a speech before the Workers’ Party Politburo in December 2019? Thus far, there have been only hazy suggestions, “We’re still waiting for it,” says Jaewoo Shin of Open Nuclear Network. North Korea tested nine short-range missiles in early and late March, but has not tested any since.

Despite that lack of testing, international observers say North Korea is continually adding to its arsenal. The International Atomic Energy Agency (IAEA), for instance, has harshly criticized the isolated nation’s nuclear program, with IAEA Director General Rafael Grossi calling it “a clear violation of relevant UN Security Council resolutions” on September 20. IAEA inspectors have not had access to North Korean nuclear facilities since 2009.

Kim Jong Un himself underscored the vital importance of his country’s nuclear capabilities in a speech delivered to veterans of the Korean War (1950-53) in late July, saying that his country was now able to defend itself against any military threat posed by enemy forces. “Thanks to our reliable and effective nuclear deterrent, our country’s security and future will be guaranteed forever.” 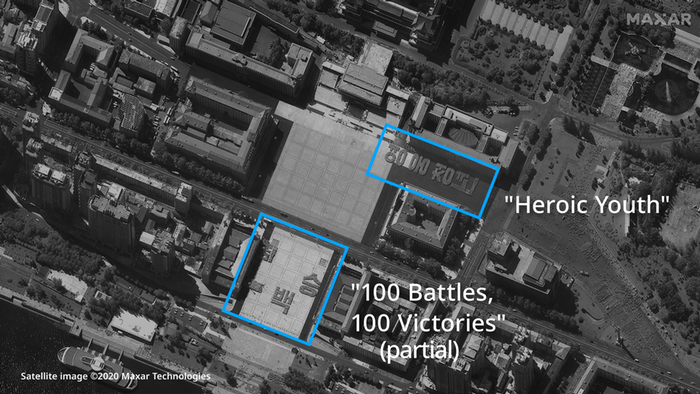 During their rehearsals for the parade, students from Pyongyang form propaganda slogans

Former CIA analyst Jung H. Pak says every statement delivered by the North Korean leader is part of a calculated strategy: “I think that it is Kim’s intention to be vague, so that our imagination runs wild.” Pak is confident that deeds will follow the announcement, saying: “When the regime says that they are going to do something, they usually follow through.” But what might the DPRK’s new strategic weapon promise?

“It might be some sort of improved solid-fuel capability,” says Pak. The major advantage of solid-propellant missiles is the fact that they can be transported fully fueled. That makes them easier to move and much faster to deploy than those that have to be fueled in place with liquid propellant before launch.

Pak says it is also possible that the “new strategic weapon” may be a ballistic missile that can be launched from a submarine. As a rule, missiles launched at sea are more capable of evading enemy missile defense systems.

What is North Korea’s strategy?

Observers suspect the submarine that could most likely launch such a missile is currently in port at the Sinpo South Shipyard on North Korea’s eastern seaboard — where the DPRK has been working on a new Sinpo-class sub since 2017. Satellite images of the port’s protected harbor basin have consistently shown a covered object that experts have been watching closely and believe is this submarine. 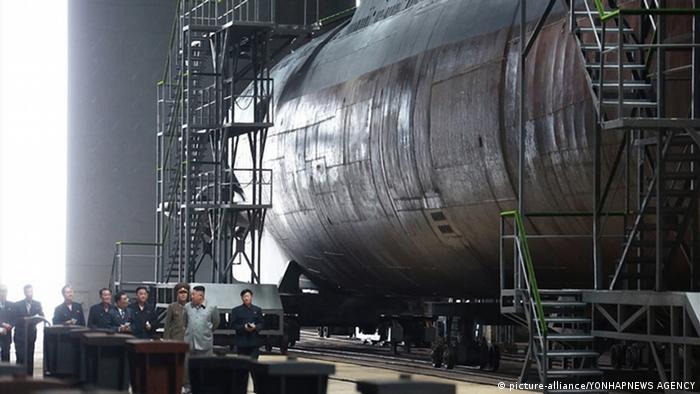 Since then, there has been much speculation as to just how advanced the North Korean submarine project really is. Whatever state it may be in, Town thinks it is “highly unlikely” that it would have its premiere at a military parade. She says it is more likely the sub could be ceremoniously launched in Kim Jung Un’s presence around October 10: “That would depend largely on the status of the submarine construction of course — for which we have no indication of at the moment.”

Recent satellite images have recorded a lot of activity at the Sinpo South Shipyard. Initially, observers thought that might indicate preparations for a new ballistic missile test. Still, such suspicions have yet to be substantiated. Rather, 38 North and Open Nuclear Network are operating under the assumption that damage from this summer’s typhoons are more likely the reason for the increased activity. “But that doesn’t mean the country isn’t capable of carrying out a submarine-launched ballistic missile test at the occasion of the anniversary on October 10,” says Jaewoo Shin. 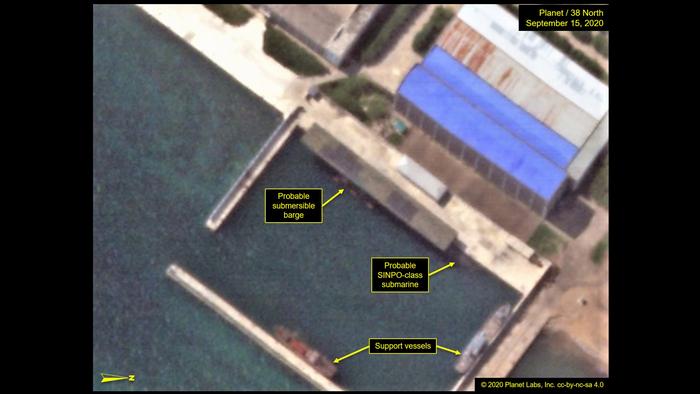 North Korea and the US: A tense relationship

North Korea’s frosty relations with the US may also be reason for the DPRK to flex military muscle on such an important national holiday. The last big military parade staged in North Korea was held in Pyongyang in September 2018. At the time, the DPRK was celebrating the 70th anniversary of the nation’s founding — and it did so with tanks, fighter jets and missile launchers. Ballistic missiles, however, were not featured in the 2018 spectacle. Observers saw that as a clear sign, as the celebration took place in the middle of a new phase of North Korean-US rapprochement — and just weeks after the historic first meeting between North Korean dictator Kim Jong Un and US President Donald Trump in Singapore in June.

But relations have deteriorated considerably since the collapse of the second round of talks in Vietnam at the US-DPRK Hanoi Summit in February 2019. And although US Secretary of State Mike Pompeo signaled a US willingness to hold further negotiations this summer and noted US hopes for a resumption of dialogue, the response from the DPRK was much less optimistic.

In an official statement delivered to North Korean state media outlet KCNA , Kim Yo Jong — Kim Jong Un’s influential younger sister — said she saw little chance of a summit by the end of the year: “I doubt that things like the DPRK-US summit talks will happen this year,” adding that unlike the US, such talks “do not serve us at all.”

That was a clear message and the next one may well come in just a few days’ time — at the military parade celebrating the 75th anniversary of the founding of the WPK in Pyongyang on October 10.

Adapted from the original German by Jon Shelton.

North Korea prepares to flex its muscle at military parade have 2257 words, post on www.dw.com at January 1, 2020. This is cached page on Europe Breaking News. If you want remove this page, please contact us.