Paraguay international Almiron volleyed home late on to get off the mark on his 27th appearance in the competition and settle a match that was heading for a goalless draw.

Goals proved hard to come by in the stalemate between Everton and Arsenal, a low-quality match watched from the stands by respective incoming bosses Carlo Ancelotti and Mikel Arteta. 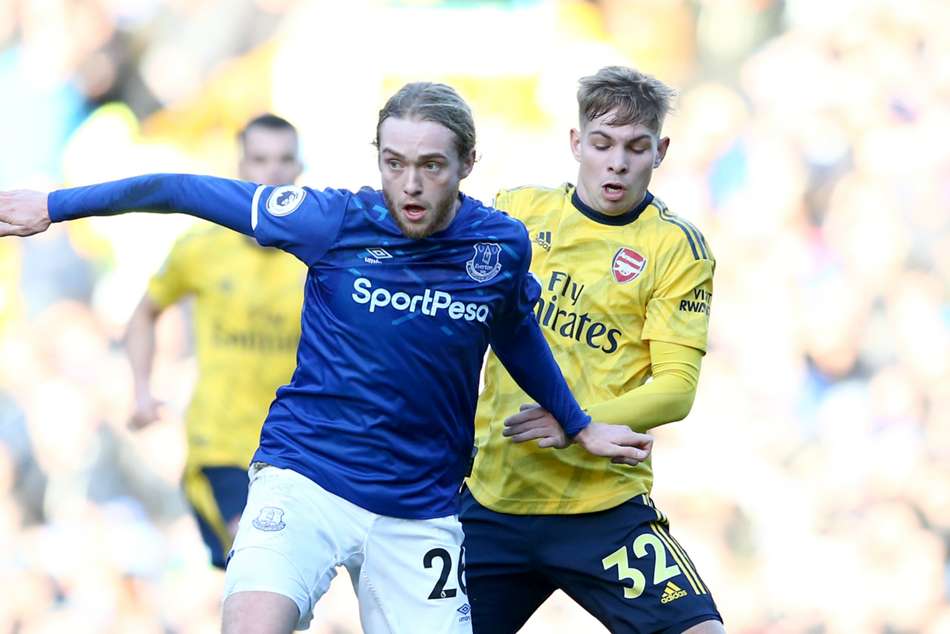 Everton failed to record a shot on target in a top-flight home match for the first time since January 2018, while Gabriel Martinelli went closest to scoring for the visitors.

Elsewhere, Burnley, Sheffield United, Wolves and Southampton all won away from home, the latter seeing off relegation rivals Aston Villa 3-1 to boost their survival hopes.

With Arteta not officially taking charge of his first Arsenal match until the Boxing Day trip to Bournemouth, interim head coach Freddie Ljungberg oversaw yet another below-par display from his side.

The Gunners looked the more likely side to score on Merseyside but lacked cohesion all over the field and had to settle for a point, making it just one win in 13 matches in all competitions.

Arsenal did at least manage to test Jordan Pickford – the England international doing well to keep out Pierre-Emerick Aubameyang in the second half – with the Toffees rarely troubling the opposition defence.

Ancelotti was confirmed as Everton’s new manager on a four-and-a-half-year deal shortly before kick-off, giving him a chance to witness up close just how big a task he has on his hands when taking the reins from stand-in boss Duncan Ferguson.

A third victory in four Premier League matches for Newcastle was secured thanks to Almiron, who has had a tough time of things since arriving from Atlanta United for a reported £20million in January.

Almiron converted with a first-time finish seven minutes from time after being teed up by Andy Carroll’s header, ending his long-running goal drought and sending United up to ninth place.

Palace, now without a win in three league outings, saw more of the ball and had the better of the chances, but Wilfried Zaha and Christian Benteke were unable to find a way past home goalkeeper Martin Dubravka.

Ings scored either side of Jack Stephens’ towering header as Ralph Hasenhuttl’s charges raced into a three-goal lead at Villa Park with 51 minutes played.

Jack Grealish scored a fine goal to reduce the arrears, but Villa left themselves with too big a mountain to climb and are now in the relegation zone after a fourth defeat on the spin.

Norwich City failed to make their first-half dominance count in a 2-1 home loss to Wolves that leaves them six points adrift of safety at Christmas.

Todd Cantwell pounced on a loose ball to give Norwich a deserved 17th-minute lead, but they could not build on their advantage and Wolves hit back.

After a subdued opening hour, Romain Saiss sparked his side into life with a powerful header and Raul Jimenez made it 16 goals for the season across all competitions late on to condemn Norwich – who have one point from their last five home matches – to another defeat.

Sheffield United continued their march up the Premier League with a 1-0 win at Brighton and Hove Albion, despite the frustration of having two goals ruled out by VAR.

John Egan’s bundled finish was chalked off for handball and Jack O’Connell was denied for offside – the third and fourth goals United have been awarded on the field this term, only for VAR to intervene.

Not that it mattered, though, as Oli McBurnie’s third goal of the season – a powerful strike past Mat Ryan after 23 minutes – proved enough for Chris Wilder’s men to keep their unbeaten away record this season intact as they moved into the lofty heights of fifth place.

Burnley edged out Bournemouth 1-0 at the Vitality Stadium in a game that saw the sides register just five shots between them – the fewest recorded in a Premier League game since records began in 2003-04.

The one and only attempt on target arrived in the final minute of the game, Jay Rodriguez heading in Ashley Westwood’s cross from close range to settle a dreadful game.

Jefferson Lerma’s 30-yard effort over the bar was as good as things got for a Bournemouth side that have lost six of their last seven league matches to slip into relegation danger.

Get breaking news alerts.
Allow Notifications
You have already subscribed

Premier League review: Almiron off the mark, Everton and Arsenal play out bore draw have 1099 words, post on www.mykhel.com at December 22, 2019. This is cached page on Europe Breaking News. If you want remove this page, please contact us.