The first-ever real picture of a black hole has been revealed, in what is being hailed as a historic moment for science.

Assembled by data from eight radio telescopes, the image depicts a fiery orange and black ring of gravity-twisted light swirling around the edge of the abyss.

As “science fiction becomes science fact”, here is a summary of what we know:

:: It is located about 54 million light years from Earth

:: The black hole is big enough to swallow stars at the centre of a distant galaxy

:: It is at the centre of Messier 87 – a huge galaxy in the relatively nearby Virgo galaxy cluster

:: The image shows light bending due to the black hole’s powerful gravitational pull

:: The first data was gathered in April 2017 using telescopes in Arizona, Hawaii, Mexico, Chile, Spain and the South Pole – with observatories in France and Greenland later joining the project

:: It took four days of perfect weather for the historic image to be formed.

Black holes are among the most dense and inescapable objects in the universe.

They are made up of what is left when a star dies and collapses in on itself. Supermassive black holes are even more mysterious and feature at the centre of most galaxies, including ours.

Nothing – not even light – can escape their gravity.

Until now, there have only been simulations and artists’ impressions. Viewing them is very difficult because they suck in all the light.

Scientists managed to capture a ring of light – disrupted matter and radiation circling at extreme speed – around an area of darkness representing the actual black hole, known as the shadow or silhouette.

“The history of man and of science will be divided into the time before the image and the time after the image,” said Carlos Moedas, the European commissioner for the research.

The announcement was made in simultaneous news conferences in Washington, Brussels, Santiago, Shanghai, Taipei and Tokyo. 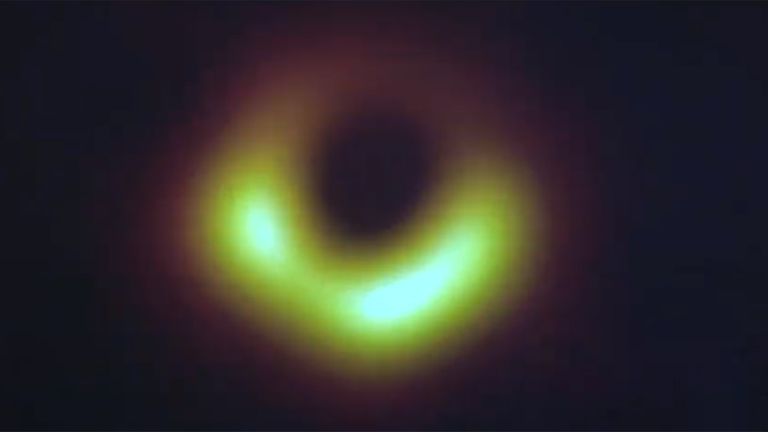 “The size and shape of the shadow matches the precise predictions of Einstein’s general theory of relativity, increasing our confidence in this century-old theory,” said EHT astrophysicist Dimitrios Psaltis from the University of Arizona.

Dr Brooke Simmons, a lecturer in physics at Lancaster University – and an expert in supermassive black holes – told Sky News that it was a momentous day.

He said: “The black hole at the centre of Messier 87 is a monster by any definition, many billions of times more massive than the sun, anchored at the centre of our nearest extremely massive galaxy.

“It’s the stuff of wonder and awe for a budding young scientist.”

Black hole revealed: First-ever image unveiled by scientists have 759 words, post on news.sky.com at April 10, 2019. This is cached page on Europe Breaking News. If you want remove this page, please contact us.