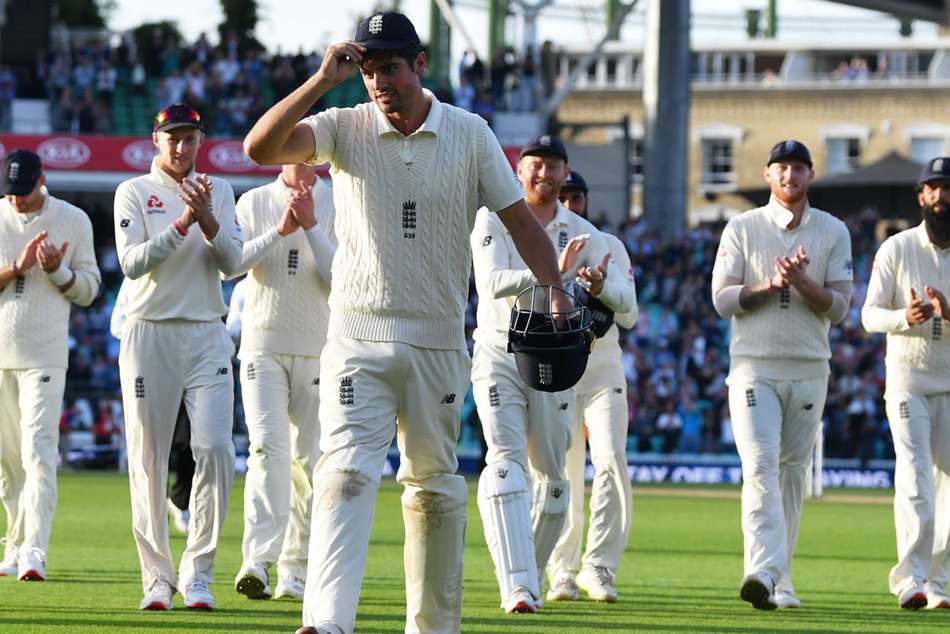 Cook said it would have been very embarrassing for him if Cheteshwar Pujara had stopped the overthrow and he had started celebrating since he had not noticed the latter chasing the ball, so he will thank Bumrah for the overthrow. “I remember cutting it for 97 thinking that’s three more to go. Just as he (Bumrah) let it go I thought, ‘hang on a minute – he’s launched that pretty hard’. As soon as I saw Ravi (Jadeja) not anywhere near it I thought ‘hang on a minute… hang on a minute’.

“Then obviously it erupted. Joe (Root) didn’t say anything. He was just saying “wow”. He was just smiling. I think he was telling me to better take it in. The ovation was just incredible. That’s probably the only one I’ve really taken in and thought – ‘wow’. Then obviously the last 10-minutes as well today was special,” he added.

There was a gift for Alastair Cook at the press conference #ThankYouChef pic.twitter.com/UV6fFcM1JL

Cook said the reception since his retirement announcement has been surreal and he is simply thankful enough to go out on a high. “I can’t really describe the emotions I have felt in the last few days. It’s just been the most surreal four days of my life really. For all that to happen today, and every reception I’ve had over the last four days, it’s just been incredible. Even that last couple of overs, when the whole crowd were singing my ‘Barmy Army’ song, it was incredibly special,” said Cook.

“From a purely selfish point of view, I couldn’t have asked for a better week. But there have been bigger things, in more important games, which have meant more. On a purely emotional level, with a lot of my friends and family here, Alice’s granddad here, my mum and dad, Alice’s mum and dad, most of the farmers from Bedfordshire (his friends) as well.

Thrilled for Alastair Cook to end on such a high… I was there for his first Test Century in Napur and there today for his last. Great cricketer, he will be missed. https://t.co/yCfviGxh9F

“In one way, everybody said the pressure will be off. But it’s been one of those weeks where every reception I’ve got, then not to go and get nought, get out early, it has brought a different kind of pressure. To perform and have a day like that, after 160 other games, it’s a nice way to go,” he added.

The opener had managed only 109 runs in seven innings earlier in the series, and said that the century only confirmed his decision to retire. Cook also scored 71 in the first innings, his first half-century since scoring against Pakistan at the start of this English summer. When asked if this could possibly reverse his retirement decision, Cook said no, and added that it wasn’t a tough call to hang up his boots.

“It absolutely confirms it. This is not just the culmination of three or four low scores, bad games in a Test series. It’s been something that’s been coming for 12-18 months, not just a bit of bad form. That’s happened to me a number of times in my career.

“It is just time. It’s time for me – it’s time for my family. It’s always nice people wanting a little bit more than trying to kick you out, and to go on your own terms makes it even better. It’s weird because actually it was a really easy decision for me,” Cook said.

“I’ve spent all my life trying to play for England so then to give it up is obviously a big thing. But, it’s a bit like the captaincy – when you know it’s right, it’s right. This is just the icing on the cake, this final little bit, the last four days are unbelievable,” he added.

The opener broke many records on the day, overtaking Kumar Sangakkara as the fifth-highest run-getter in Test cricket as well as overtaking Steve Waugh (32) in number of centuries. He became only the fifth batsman in history to score centuries in his first and last Tests.

Very few players go out on their own terms and even fewer on the high hit by Alastair Cook.

Cook said that it would be a brilliant moment to be able to go out on a high, particularly if India lose the series 4-1. “I don’t know how I’ve managed it to be brutally honest. But it is nice that it’s happened. I’ve seen a few people go out not on their own terms and it’s obviously special. But to go out on your own terms when your last ever innings for England was a hundred. And obviously tomorrow if we can top it off with a win and a 4-1 win over the number one side in the world would make it even more special,” said Cook.

“It’s strange how it (getting hundreds in first and last Tests) works. I don’t know who decides all that stuff. But, yeah there is,” he signed off.

Get breaking news alerts.
Allow Notifications
You have already subscribed

India vs England, 5th Test: I will thank Bumrah for a while for that overthrow: Alastair Cook have 1393 words, post on www.mykhel.com at September 11, 2018. This is cached page on Europe Breaking News. If you want remove this page, please contact us.