David Lean, who first met Barry Bennell in 1979, says he still harbours guilt that he may have been one of the first to be abused by a man who has now been convicted of a string of sex attacks.

Here, he tells how he was first charmed and then attacked, and how he ended up living with years of shame before finally having the courage to tell police what happened:

I first met Barry Bennell as a 12-year-old boy on a family holiday with my parents and brothers at Butlins in Pwllheli, northwest Wales, in May 1979.

Bennell was the resident football coach and at first glance I was convinced I was about to be coached by Kevin Keegan.

The coaching sessions were fantastic. He was a brilliant coach with a winning personality. Everyone loved him.

The skills he could perform were way ahead of his time, including keeping the ball up in the air on just his shoulders and head.

He instantly took a real shine to me and started to praise me at every opportunity, calling me a “little star” and telling me and my dad he had links to Manchester City, ran a feeder team for the club and that he wanted me to go and play games for his team during the forthcoming season.

Butlins at the time ran a boy-of-the-week competition and although I did not win it on that occasion, in my mind I had won the biggest prize.

I had exchanged addresses with my new hero and he wanted me to play for his team the next season.

I was so desperate to win boy-of-the-week, I somehow managed to persuade my parents to take the family to Pwllheli for a second holiday in September that year.

This time, the praise and attention were far greater, and I did win.

I was on cloud nine. I won a huge trophy, got my first ever photograph in the paper and won a free holiday, too.

Bennell had given me a couple of football shirts and had been writing to me for almost four months and, by this point, I worshipped him.

Due to my own football commitments in Lytham St Annes – playing for my local team, my school and Blackpool school boys, as well as rep teams – I never ended up playing for his feeder team.

In early 1980 he wrote to me, inviting me to go and take part in a soccer skills course in Macclesfield which was scheduled to take place on a Friday.

The plan was to travel on Thursday evening to his property and stay until the Saturday morning, which would mean spending two evenings with him.

I was buzzing. I could not get there fast enough and was really looking forward to it. Two nights at my hero’s house, playing football – what more could I want?

However, things soon changed. From the time I arrived, he never left me alone. He focused all his attention on me, play-fighting, touching me, massaging me and sort of cuddling up on the couch.

When I got into bed that night, Bennell left the room and then re-entered and got into bed with me, without asking.

After a long period of tickling and playing mirroring games he sexually abused me in bed for a prolonged period.

The following day after football, I returned with him to his property and the abuse happened again.

Each morning, following the abuse, he acted completely normal and was back to his passionate and enthusiastic self.

I was all alone, lost, scared and confused, miles from home.

Once back home, I began spending time on my own in my bedroom.

I had no idea what had happened and due to the way my own body had reacted at the time of my abuse, I thought perhaps I was gay.

I was embarrassed and kept it to myself for many years after.

I knew I was never going back there and had just begun to feel safe again in that knowledge.

However, just a few weeks later, I arrived home from school to find him sitting in my front room talking to my mum.

He had never been to my house before.

For many months afterwards, I was terrified to come home from school.

For several years, I began knocking around with younger boys, as boys my own age started to get girlfriends and I was confused. I felt safer and less confused with younger boys as they were still obsessed with football and not so much into girls.

I finally told Macclesfield Police what had happened to me on 4 February 2013, which was very hard.

I then had a long battle with the CPS. They initially dropped my case as it was ‘not in the public interest’.

I told both the police and CPS at that time that there would be hundreds of victims of Bennell and asked them to open an investigation, but they still dropped my case.

Following an appeal to the CPS child sexual abuse review panel, Bennell was finally charged. After a long wait for a court date, he was convicted in May 2015. He received a jail sentence of just two years, of which he would serve just one.

On the back of my case, another survivor came forward and further charges were bought at the end of November 2016.

It took 14 months from that survivor giving his statement to the police to Bennell finally being charged again.

That survivor had gone to the police just four months after Bennell was convicted for sexually abusing me.

I always knew there would be many more victims, and this started a process which has proved that it was always in the public interest to prosecute this prolific serial paedophile.

It has been very difficult over the last five years for both myself, my family and of course my wife Teresa who, without doubt, has been not only my wife, but my best friend throughout all of this.

I have received two periods of counselling over this five-year period, for which I am very grateful.

This not only helped me to get through this difficult time, it has finally helped me to understand certain aspects of my abuse, which has allowed me to move on with my life.

Believe me, it never, ever goes away.

It was very hard to read, especially knowing that every single survivor suffered their own abuse after me, leaving me with a feeling of guilt that is very hard to live with.

I regret daily not following up on a comment I made to my dad as I got in his car that Saturday morning in 1980.

I told him Bennell had been “trying to get in my bed but I wouldn’t let him”.

I don’t recall making this comment, but it was the first thing my dad disclosed to the police during his interview.

Despite not recalling it, I feel somewhat responsible for Bennell’s continued abuse of young boys.

If only I had said something. 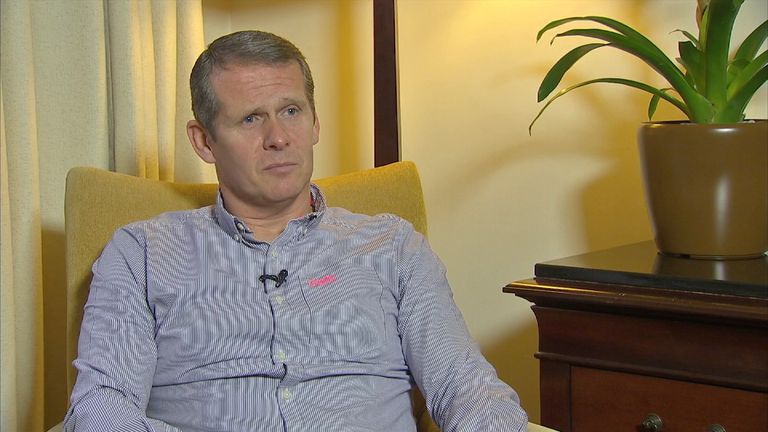 After battling cancer, my mum died on 20 January 2013, and I told the police what had happened to me just five days after her funeral.

This, without doubt, opened many old wounds and over the past five years I have had some very dark and difficult days.

Bennell was first jailed in the US in 1994 for assaulting a British boy on a football tour, and in 1998 was sentenced to nine years in jail in the UK for the sexual assault of six boys.

I had made a secret promise to myself around that time that I would not make a disclosure while my mum was alive.

She had said to me: “I don’t think I could cope if he had abused you.”

How could I put my mum through that?

I knew I had to protect her. However, I always wanted justice and I was never going to allow him to get away with sexually and psychologically abusing me.

I will continue to raise awareness of childhood sexual abuse after this case has concluded.

I have a truth to tell and I believe I can continue to help raise awareness.

My determination to seek justice resulted in me winning my appeal, which changed the guidance in favour of prosecution. It effectively changed the law to support other survivors coming forward in future, and I feel very proud of this.

On Friday 15 June this year, I am asking everyone to wear purple with my free and simple campaign #purplesummer.

Collectively, we can raise awareness of all aspects of child abuse. It is inclusive to all, regardless of age, sex or religion, and is aimed at bringing us all together on one day to raise further awareness.

We need to protect our children, both now and in the future. No child should ever be abused, and no abuser should go undetected.

I knew it was always in the public interest – and now the world knows it too.

Barry Bennell called me his 'little star' - then groomed and abused me have 1991 words, post on news.sky.com at February 19, 2018. This is cached page on Europe Breaking News. If you want remove this page, please contact us.