“You have a sense of sorrow that you didn’t get an opportunity to do what you know you could have done, had weather not intervened,” William E. Weber says. The retired US-Army colonel was a member of the 187th Airborne Regimental Combat Team dropped behind enemy lines in North Korea on October 20, 1950. Several thousand soldiers landed near Sukchon and Sunchon, about 50 kilometers north of Pyonyang. The plan was to prevent the North Korean army from retreating and the government from fleeing – but it failed.

Due to bad weather, the jump was delayed by several hours, which gave the North Koreans enough time to disappear, Weber remembers. The soldiers arrived too late for the more than 200 UN prisoners of war, on their way in a train transport to the North. “When it became apparent we were going to be able to rescue the prisoners, they massacred them, slaughtered all of them, in the tunnel,” Weber told DW – adding those are the imponderabilities of war that are not worth losing sleep over. 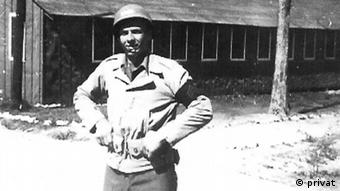 Weber is proud to have fought in Korea, but he regrets some of the things he did there

Born in Chicago, William Weber grew up in Milwaukee. At the age of 17, during World War Two, in February 1943, he enlisted with the US Army. In January 1945, he was deployed to the Pacific, first to the Philippines, then to Okinawa and Yokohama to monitor the Japanese capitulation. His grades were good, and since there was a lack of senior officers, Weber had the opportunity to take up an officer career.

In September 1950, he was wounded in Korea for the first time, shot in the shoulder. No big deal, Weber says. “Those kinds of wounds don’t put you down; they’re basically an inconvenience unless they hit a nerve or an artery. One that goes in and out, it’s just not a hell of a lot different than if you stick a needle in your finger, it’s just a bigger hole, that’s all.”

But even a professional soldier like William Weber doesn’t take everything as lightly as a missed chance because of inclement weather or a simple shot in the shoulder.

‘What we had to do was terrible’

That December, Weber’s regiment secured the retreat of the Eighth US Army to the 38th Parallel. On the Yalu River, the Americans were defeated by the Chinese, who had in the meantime entered the war. The retreat took the army through rural areas, past villages at the foot of mountains. They had orders to make sure the Chinese troops on their heels would not find food or shelter. “We were forced to destroy the livelihood of these innocent people, we burned their homes and we burned their stores – they had already harvested their rice and wheat,” Weber says, tears in his eyes as his voice falters. “We destroyed their ability to live. They died, they starved, they were uprooted.” 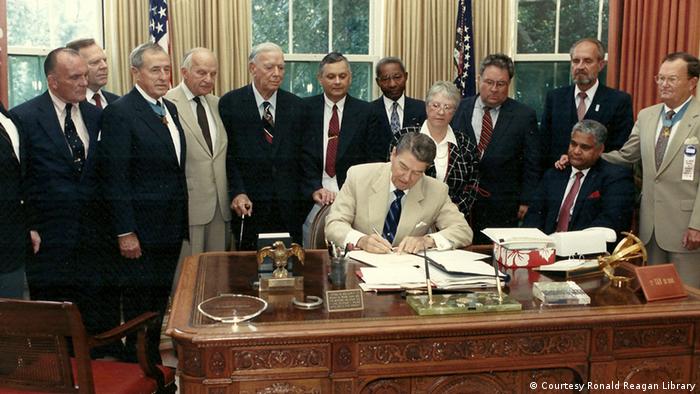 “It was war, but what we did to those people because we had to was terrible,” Weber says, adding that he and his comrades return to those events every time they meet. “It wasn’t our fault. But those of us who did that have lived with it ever since.”

William Weber paid a high price for his Korean mission. In February 1951, he was heavily injured in the battle for Wonju, a city about 140 kilometers east of Seoul. “I lost my arm at about 23:00 at night on the 15th and I lost my leg about 2 a.m. the next morning,” he says, adding he took shrapnel wounds from artillery shells on his right side about 2 hours later. The war veteran is convinced that the cold weather that so many moaned about saved his life and prevented him from bleeding to death. 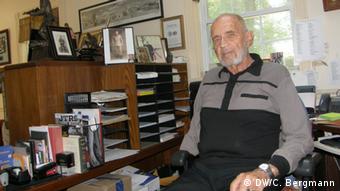 The injuries spelled the end to his deployment in Korea, but Weber stayed in the Army until his retirement in September 1980. He says his injuries haven’t changed his life in any fundamental way. When he walks, it is barely noticeable that he lost a leg, and he gesticulates as much with his half right arm as with the whole left arm. He says now, at 87, in his mellow dark voice and looking at you with his alert pale blue eyes, that they just adapted. In 2002, Weber revisited Korea and the site of the battle that cost him his limbs – and it gave him closure.

Reminder of the ‘forgotten war’

Weber lives in a large comfortable house in New Windsor, an hour’s drive north of Washington DC. He swims regularly to stay fit, in a pool he had installed with a counter-current system. When he is at home, that is. These days, constantly on the road to keep the memory of the Korea War alive, he barely has time to mow the lawn on his property. It is a “forgotten war” that is given little publicity compared to World War Two and the Vietnam War.

Weber is chairman of the Korean War Veterans Memorial, unveiled 1995 in the capital. One of the 19 steel figures bears his facial features. The Korea War, the veteran says, was a “good” war. “At the time, it was politically important to prove to the communist world that the free world would not allow armed force to subjugate a free people,” he says. He is convinced the message was received: the Korea War, he says, was the beginning of the end of communism.

A US veteran remembers the Korean War have 961 words, post on www.dw.com at January 27, 2013. This is cached page on Europe Breaking News. If you want remove this page, please contact us.